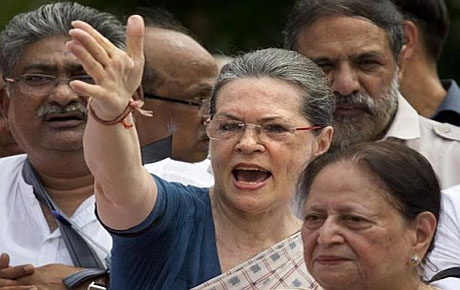 New Delhi, Aug 6: Congress President Sonia Gandhi is very angry. And there are reasons for her anger. First, 25 MPs of her party were expelled in just one go by the Speaker of Lok Sabha Sumitra Mahajan and there is no signs of this suspension being revoked before the deadline. The outside protests, however ‘strong’ they may be. Secondly, the Modi government clinched a long awaited peace agreement with the Naga insurgents thus intruding into the Congress party’s constituency.

Launching a strong attack on Modi government the Congress President said, “The Modi Government did not consult the chief ministers of other Northeastern states, namely Manipur, Assam and Arunachal Pradesh”.

Opening another front against the government, Sonia and Rahul, alleged that the voice of the three states of Manipur, Assam and Arunachal Pradesh is being "suppressed".

Talking to reporters in Parliament complex, the Congress President said when she called her party's chief ministers in the three states, who are directly affected by the Naga accord, she found that they were "totally blank" on the issue.

"Nobody has even bothered to brief them, perhaps not in detail, but in a wide sense. After all, our chief ministers are directly affected, be it Manipur, Arunachal Pradesh or Assam. So, what do I take from this? From this I take that this government is arrogant.

But alas! This attack was aborted by her own party’s Chief Ministers of Arunachal Pradesh and Assam who welcomed the agreement!!

“Welcomed the initiative of the Centre to bring a peaceful solution to the prolonged Naga political issue #ArunachalPradesh # NSCN”.

More shock came from Assam Chief Minister Tarun Gogoi a ‘faithful Congressman’ who too welcomed the peace accord. The only reservation he expressed was with the clauses of agreement. Welcoming the Naga peace deal, Gogoi had expressed astonishment on why “clauses of the agreement had been kept in the dark.” 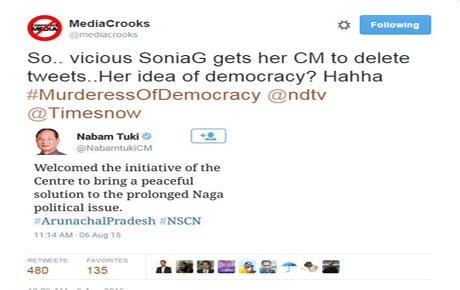 That she made Nabam Tuki, the poor Chief Minister to withdraw this tweet is another story. But her anger exposed her frustration and helplessness to control and monitor the political discourse in India. The authority she enjoyed by proxy for these many years has come to such a pass with the rise of the nationalist BJP.

Her comment is greeted with strong criticism on social media by tweeples. Here are some examples:

@mediacrooks Sonia G is such a cry baby 😂 @ndtv @TimesNow

@mediacrooks @ndtv @TimesNow This is the same reason Govt. did not consult these Congis. Although the fact is that everyone was on board.

@mediacrooks Sonia Gandhi's clear message to Cong CMs is, "Either you are with me or you are with India. Choose one."  @ndtv @TimesNow

@mediacrooks @ndtv @TimesNow Hahaha if ur not consulting Sonia madam b4 tweeting u might soon be quitting!!! Lol!!!

This is enough to gauge the public mood in support of the Naga peace pact and the vehement and arrogant opposition of the Congress party President to it.

There is another angle too. The Telegraph of Kolkata carried a news item that exposed the Congress party of giving ‘some donation’ to NSCN (Khaplang Group), the rival of NSCN (IM) that clinched the deal with the Modi Government.

The Telegraph’s Kohima datelined report titled “More dirt on Naga donation scandal” says: “NSCN (K)’s voluntary disclosure of a ‘donation’ from the Congress has prompted the Isak-Muivah group to reveal more about its rival’s alleged dealings with politicians.”

The NSCN (IM) claimed to have information about NSCN (K) received Rs 25 lakh from the commerce and industry minister Khekiho Zhimomi recently. The money, it said, was handed over to NSCN (K) functionaries at Amiphoto Colony in Zunheboto where Kitovi Zhimomi, general secretary of the NSCN (K), lives.

The report said that the Isak-Muivah group’s revelation came days after the NSCN (K) caused a flutter by thanking the Congress for a donation of Rs 5 lakh through the leader of the Opposition, I. Imkong Ao. Kughalu Mulatonu, the outfit’s chaplee kilonser (finance minister), said the donation might have been made in expectation of “help” in winning the Assembly elections, slated for early next year.

Accusing its rival of even hobnobbing with politicians in neighbouring Manipur, the Isak-Muivah group said the NSCN (K) had issued acknowledgements for cash transactions with the Okram Ibobi Singh government. “This shows that our rival has a price tag for its involvement in elections.”

It also criticised the “alliance” between the NSCN (K) and Manipur-based outfits that were “against the aspiration of the Nagas”. The Isak-Muivah group said it was “unprincipled” to join forces with outfits trying to impede the campaign for integration of all Naga-inhabited areas of the Northeast with Nagaland.

“Taking lakhs of rupees from Nagaland politicians to assist them in Indian elections and accusing others of diverting attention from their nefarious deprivation of Naga people’s democratic rights reflect their anti-people motives,” it said.

With this exposure what is left with Congress and Sonia Gandhi but to criticise and launch severe attack on the Modi government for getting this deal inked with the NSCN (IM)?

In fact, there has been countrywide welcome for the Modi government for sealing this deal with the Naga insurgents paving the way for just and durable peace in the sensitive northeastern region of India. The deal assumes more significance as it ends the oldest insurgency in India. The deal resolved two most important issues related to the demands of Naga sovereignty and Greater Nagaland or Nagalim. The government succeeded in effectively assuring the Naga leaders that their interests would be protected and they would be granted autonomy.

The NSCN (IM) is the strongest of all the insurgent outfits in the region and even considered as “mother of all insurgencies”. It had become an obstacle in the development of the region and this pact with the NSCN (IM) has cleared that hindrance now. It is ok that more detail modalities and other frameworks will have to be worked out with precision and taking all aspects and dimensions of the problem. This pact is the most important step in that direction. There is no doubt about it. It has presented the best opportunity to the people and political parties. That opportunity should be fully utilised.

By opposing this accord, whose interests the Congress president is serving? Is she acting on the directives of the Church which has vested iterests in India's northeast? Will Sonia and Rahul show political maturity and wisdom or simply go around opposing the good things this government is doing?