Hamid Ansari, Vice President of India, made certain observations a couple of days ago on a public platform that stirred the nation’s social psyche. That Hamid Ansari is very learned, wise, scholar and diplomat and above all a sensible and seasoned politician is beyond doubt.

How it suddenly dawned upon him that Muslims in India are being neglected and discriminated against in spite of the government that believes in the principle of ‘Sab ka Saath, Sab ka Vikaas’ remains mystery. He realized to the dismay of the countrymen that the Prime Minister who talks of “125 crore Indians” has not given enough attention to the overall welfare of Muslims.

So he thought of reminding Prime Minister Narendra Modi of his ‘constitutional duty’ towards Muslims. And what could be the better platform for this than the one offered by all Muslim body called All India Majlis-e-Mushawarat!

Ansari utilized this opportunity to voice his concerns and prove him to be saviour of Muslims in India.

The Vice President commended the government for the ‘official objective’ of “sab ka saath, sab ka vikaas”, but at the same time asked the government to initiate “corrective strategies” at the earliest by developing an “appropriate instrument” for ensuing welfare and development of Muslims.

Hamid Ansari referred to “compendium of official reports” to list the main problem of the Indian Muslim Community as “identity and security; education and empowerment; equitable share in the state resources and fair share in decision making”. Each of this is the right of the citizen, he said.

No one denies the legitimate right and opportunity to Muslims in India to develop them. The Indian Constitution gives equal right, nay, more rights to them under minority status. But it is also the stark reality that majority Muslims have remained backward, illiterate and are reeling under poverty.

Ansari holds the high profile Constitutional office of the Vice President. He has every right to forward his concerns and remarks and observations to the government and seek action on them. He also acts as the president in case the latter’s office falls vacant. And the President is not expected to publically criticize the functioning of an elected popular government. Such criticism would be improper even if it comes from the Vice President also.

Ansari’s predecessors Dr Zakir Hussain, Fakruddin Ali Ahmed, Gyani Zail Singh and Dr APJ Abdul Kalam who adorned that top Constitutional post and who belonged to minority communities never expressed themselves in such a partisan way from a public platform as Ansari did in this case. By indulging in this act, Ansari has lowered the Constitutional prestige and dignity of this high office.

The Vice President has, by his behaviour, speeches and actions, to convince the nation that he is above the party politics and partisan interests. He needs to uphold his impartiality in all circumstances. It is unfortunate that Hamid Ansari overstepped this statutory obligation by making such remarks from a public platform. Maybe he forgot for a moment that he was Vice President of India and not the leader of Muslim community only. Otherwise he would not have proposed a particular line of action for the government. When he referred thrice the constitutional rights of the Muslims how could he forget his own constitutional duties as Vice President of India.

In course of his speech Ansari made a very important observation. He said Muslims were “made to carry, unfairly, the burden of political events and compromises that resulted in the partition of India. The process of recovery from that trauma has been gradual and uneven, and at times painful. They have hesitatingly sought to tend their wounds, face the challenges and seek to develop response patterns. Success has been achieved in some measure; much more, however, needs to be done”.

The Vice-President also observed that “failure to communicate with the wider community in sufficient measure has tended to freeze the boundaries of diversities that characterize Indian society....The Indian experience of a large Muslim minority living in secular polity, however imperfect, could even be model for others to emulate”. 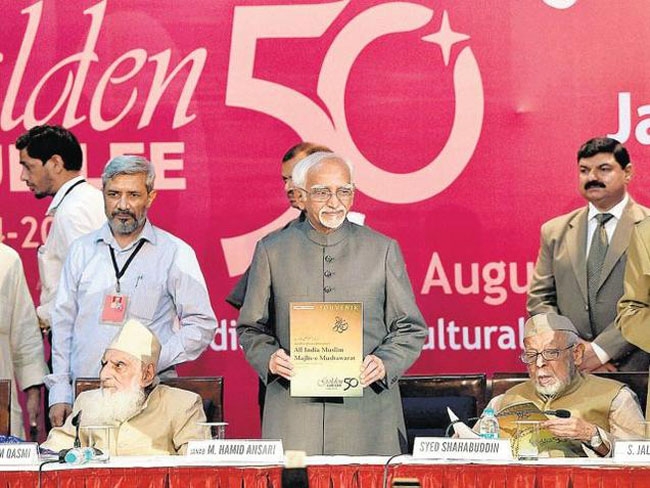 Ansari deserves a pat for this candid observation. It underlines the historical fact related to Partition of India once again. Those Muslims who wanted Pakistan had gone there. Those who did not stayed back as Indian citizens. It is true that the majority of Indian Muslims still suffer from that burden of partition sought by their leaders. When they preferred to stay as Indian citizens, they should have displayed total allegiance to Indian Constitution, law and administrative system.

But this did not happen.

The most important question that comes to mind is: Who are responsible for this sorry state of Muslim community in Independent India? Whose political interests were served in keeping this important section of the Indian society backward, illiterate and underdeveloped and insulated from the mainstream? Who used them as pawns in furtherance of their vote bank politics?

Obviously, the answer to all these questions is CONGRESS PARTY that ruled Independent India for nearly six decades! The party instilled fear complex in them about the majority Hindu community thus widening the gap and never allowing attempts of fruitful dialogue between the two communities. The party also posed itself as the sole saviour of the Muslims and sought their bloc votes to continue its power politics. The appeasement policy adopted by the Congress further alienated the Muslims from the Hindus polarising the Indian society on communal and religious lines.

Ansari referred to findings of Sachar Committee report about the socio-economic condition of the Muslims. I say, this is the report of crass negligence and incompetence of the Congress party and the gross injustice it heaped on the Muslim community in Independent India. If at all anyone is to be blamed for this it is the Congress party, Mr Vice President, to which you owe an ideological allegiance.

In Narendra Modi, India for the first time in its post-independence history, got a Prime Minister who talks of and for 125 crore Indians and does not divide them as Hindus, Muslims or Christians. Here is the man who sincerely believes in the principle of “Sab ka Saath-Sab ka Vikaas” and has taken strides in that direction. It will take time to rectify the wrong done by the Congress party in the past years and to win over the confidence of the Muslims.

It is again, the persons trained in Hindu ethos and values have taken up the challenge to bring back the Muslims into the national mainstream by winning their confidence. The efforts of former Rashtriya Swayamsevak Sangh (RSS) Chiefs the late Balasaheb Devras, and K S Sudarshan and presently senior RSS leader Indresh Kumar and Muslim Rashtriya Manch (MRM) need to be taken note of by the leaders of Ansari’s stature.

And no sincere efforts were made by the political, social and religious leaders to tell the Muslims in free and frank manner that they shared same motherland, ancestors, culture, customs and rituals, languages and eating habits with those of the Hindus. Only they have changed their way of worship some at some point of time owing to certain historical compulsions or situations. That does not necessarily mean that they should severe all connections disowning their past and relate them to the alien culture of the West Asia. The Indonesian Muslims have presented the best example in this regard to emulate.

Adopting negative stance would further complicate the issue. The proper answer to this is to go ahead in a most positive way in the light of Islamic values and ethos that inspires Muslims to love motherland, work for the community development and contribute in transforming India into a world leader to fulfil the dreams of late Dr APJ Abdul Kalam. Ansari would have done better had he urged the Muslims to imbibe this positive attitude and relate them to the Muslim branch of Indian Islam. But he chose the other way.