The Rashtriya Swayamsevak Sangh (RSS) is once again dominating the public discourse in India today. It happened during a number of times in its history of over nine decades. Barring the 1975 Emergency and its aftermath, the RSS mostly remained at the receiving end. But this time, the situation has changed.

With the first BJP government firmly in the saddle at the Centre and in 13 other states of India - its most recent spectacular victory in the north-eastern state of Assam included - the RSS has assumed a phenomenal dimension in contemporary India’s socio-politico-religious life. It is seen by its critics as the real force dictating the policies to the BJP governments. On the social front, the RSS, with a huge network of 55000 shakhas and the phenomenal growth of its allied organizations encompassing almost all sectors of the social strata, is perceived as a ‘threat’ to the ‘composite and secular character’ of the Indian society by all those who do not believe in ‘one-nation-one people-one culture’ principle.

And this is not a sudden development. The phenomenal growth of RSS and RSS-inspired organisations is the result of untiring toil and sweat of millions of its dedicated workers. They did not lose their single-point concentration on their mission of ‘man-making’ and ‘nation-building’ all through these nine decades.

And the credit for making the RSS a formidable force not only in India but also in the world certainly goes to its founder Dr Keshav Baliram Hedgewar and his vision of regaining India’s lost glory and status as a world leader. The RSS he started in 1925 in Nagpur has today become a global giant amongst the NGOs in strength, ideology, workers, and service activities besides influencing the social psyche to a great extent.

A sterling patriot: Dr. Hedgewar was a born patriot. This trait of his personality was visible through a number of incidents in his early life. He was a medical doctor by profession with a degree from the famous National Medical College of Kolkata. During his stay there, he joined the revolutionary group called Anusheelan Samiti and soon gained entry into its inner circles by sheer dent of his dedication, commitment and resolve to serve the nation. But soon he realised that the revolutionary path was out of bounds for the common man and could not be successful in throwing the British Raj out. Though he continued to be in the thick of revolutionary activities even after returning to Nagpur, he did not continue with it for long.

He was an ardent follower of Lokmanya Tilak and involved himself in various social and political activities under Tilak’s leadership. After the demise of Tilak, Dr. Hedgewar joined the Congress under Gandhi and took an active part in mass awareness programs and later in Satyagraha. He was arrested in 1921 for his fiery speeches against the British Rule but was sentenced to one year RI for the speech he made before the judge who perceived his ‘defence more seditious than his public speeches’.

Dr. Hedgewar looked at Congress as a political arm which would help him achieve the goal of securing freedom of the country. With this, he continued to be with the Congress under Gandhi for 12 years after founding the RSS in 1925. But the most pertinent question that troubled him was how the handful of British people could establish their rule over such a vast country like India? After a deep thinking, he arrived at the conclusion that this happened primarily due to a disorganised and weakened Hindu society which is the backbone of this country. The innumerable vices that had crept into its life blood had overpowered it and weakened it, he believed.

And the remedy to remove all these ills was Rashtriya Swayamsevak Sangh!

Dr. Hedgewar founded the RSS to rid the Hindu society of innumerable evils that have weakened it and to instil a temperament for Parakram or valour in its psyche. Loss of this temperament had made Hindus meek and landed them in slavery for centuries, he believed. He also believed that Hindus are the major community with whom the past, present, future and welfare also are irrevocably tied. But it needed to be strengthened to liberate it from this submissive social psyche.

Dr. Hedgewar also perceived that the Hindu society lacked a nationalist, common civic character and had become more individualistic in nature. His successor M S Golwalkar ‘Guruji’ too perceived Hindus as “naive and simpleton....there are innumerable divisions within, they are disorganized and they themselves are responsible for the injustice meted out to them... They have become the haters of themselves.”

The mirage of Hindu-Muslim unity: Most social scientists and political analysts tend to believe that anti-Muslim bias was at the root of founding RSS. But they are grossly mistaken and ignorant about the genesis of RSS. To understand this one has to carefully analyse what was done on the Hindu-Muslim unity front then.

A distinguishing mark of the Gandhi era was his firm belief in Hindu – Muslim unity as a precondition to India’s freedom. In his ‘sincere’ efforts to strike this alliance, Gandhi supported the Khilafat movement that had nothing to do with Indian independence; and crossed almost all the limits in pampering the Muslims. Even people like Dr. Babasaheb Ambedkar had warned Gandhi of the dangers involved in his Muslim appeasement.

Dr. Hedgewar too believed in Hindu-Muslim unity. He was very clear about his stand on Muslims. He believed that the nation is a single indivisible entity. The division of the society into majority and the minority would yield to separatism into the fabric of this nation leading to dire consequences. Such Gandhi-style pampering would give rise to communalism and end the hopes for Hindu-Muslim unity once for all, he believed. Hedgewar, like many of his contemporaries, proved prophetic in his prediction. He favoured Hindu-Muslim unity but was totally in disagreement with the Gandhi’s way of achieving it. He believed that the most prominent hurdle in achieving Hindu-Muslim unity was the weak, disunited and disorganised state of Hindu society. Unequal friendship cannot last long, he believed, though he was not a Muslim-hater. The state gazetteer wrote: “He was a strongly Hindu minded man, who believed in the principles and ideals of Hindutva. But he cannot be said to be against the other religions and faiths. He founded and is the chief of an organization called RSS”.

And by starting RSS Dr. Hedgewar wanted to bring Hindu society at par with the inclusion of qualities like strength, organization and unity to strike a lasting alliance with the Muslims.

Bifocal vision: In starting RSS the founder had kept short term goals and long term vision of his mission in mind. Dr. Hedgewar, a visionary himself, made the distinction in his mind about the short term and long term goals. The short term goal was to achieve freedom of the motherland. This was necessary to protect Hindu society, Hindu Dharma (not religion) and Hindu culture. This was the part of the vow RSS swayamsevaks were administered during the pre-independence days.

Freedom of the motherland was supreme in Dr. Hedgewar’s scheme of things. He wanted to achieve that in his life and perceived the World War II as the godsend opportunity to drive the British out of India. But unfortunately, he could not live to see his dream fulfilled in his life.

At the same time, he also arrived at the conclusion that unless the entire society was not united, no efforts to achieve freedom would succeed and the freedom thus earned would be short-lived. He thought deeply how to bring the Hindus together, inculcate in them a feeling of self-pride, unite them under the banner of something that was common to all, lofty enough to live and sacrifice for, till the end. Hedgewar pondered over the soul, principle traits and reasons behind

Hedgewar pondered over the soul, principle traits and reasons behind the survival of the Hindu society. He brooded over reasons of the downfall of Hindu society from the glorious past that produced a galaxy of heroes, saints, philosophers and great men. He arrived at the conclusion that the soul of Hindu society was Hindutva and the answer to all the problems lay in welding the Hindus together in the bond of this Hindutva or Hindu nationalism. He believed that Hindu is the identity of this nation and to restore it would the primary objective of his mission. To achieve this, he would have to create an organisation of people with a ‘nation-first attitude’, and sacrificing outlook, who would dedicate themselves to the organisation of the entire Hindu society.

Dr. Hedgewar believed that for this daily contact, working together, walking together and having a bond of camaraderie would make Hindu society a strong, united force with united mind and action. Dr. Hedgewar introduced the Hindu elements into the British model like Guru Daxina, Hindu Samrajya Dinostsava -the day of Shivaji’s coronation, Makar Sankranti, etc. His vision of founding the RSS on the auspices Vijayadashami Day also underlines this. The RSS model was thus devised to make the entire Hindu society strong and united.

There was no element of religion in the RSS model. Of course, the organization was committed to the protection of Dharma and Sanskriti. (Here Dharma means the system that held the society together and Sanskriti is the cultural traits associated with the society since its hoary past. Both the terms are wrongly translated into English as ‘Religion’ and ‘Culture’.) 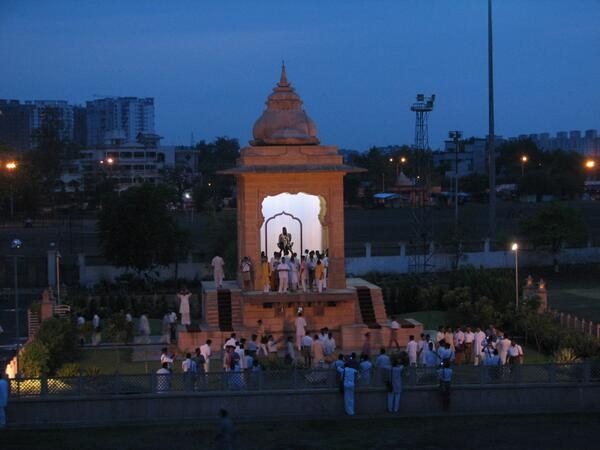 Country first attitude: The most dominant feature of the RSS teachings is to place the nation first in one’s thoughts and actions. Dr. Hedgewar was interested in making people live for the nation sacrificing their energy for the welfare of the society and merge their individual egos in the large national consciousness of the society symbolised and equated with Mother India.

Dr. Hedgewar was aware of the fact that the British would leave India sooner and the independent India would require capable and right kind of men to man the affairs of the nation. He, in his farsightedness, wanted to produce honest men of credibility and character, who would make every effort to undertake right actions in the various spheres of national life after independence. His basic diagnosis of the problems faced by the Indian society was that India did not have the right kind of people, with impeccable integrity, who could come up with the solutions to these problems. This diagnosis is as valid today as it was 90 years ago when the RSS was founded. The need for such men of integrity is universally applicable now, as it was then.

“RSS is a powerhouse,” Dr. Hedgewar would say. “This powerhouse would spread energy in the form of well moulded; nationalist men with sterling character, who will fan out in various fields of national life, influence and set it right”. Dr. Hedgewar wanted 3 percent of such swayamsevaks in urban areas and 1 percent in rural areas to provide the necessary leadership to the masses. Noted historian Arnold Toynbee also recognised the need for such people. He believed that 10 percent people with such sterling qualities can lead the remaining 90 per cent in any society.

Dr. Hedgewar’s objective and mission still remain a dream to be fulfilled.