Prime Minister Narendra Modi and Rashtriya Swayamsevak Sangh (RSS) Sarkaryawah Suresh alias Bhayyaji Joshi deserve compliments for the bold and timely warning to the self-styled ‘gau rakshaks’. This warning was much overdue. Nevertheless, it came, though late, and should be welcomed by all the right-thinking people, for these statements are in the larger interest of the nation and the society.

Incidents of attacks on alleged cow traffickers, smugglers, and traders were on the rise in the recent past. The incident at Una in Gujarat where the self-styled ‘gau rakshaks’ attacked some Dalit youths skinning the dead cow, attracted the attention of the entire nation to this new kind of extremism and tendency to take law in hand.

The cow is revered in the society, especially among the Hindus of all hues. Even there are good numbers of Muslims who rear cows and their economy depends on the practice of cow rearing. Religious piousness is associated with cows among the Hindus.

It may be difficult to trace the origin of cow slaughter in India though some scholars try to take it as back as the time of the Vedas. It can be inferred that it was during the Islamic invasions the practice of killing cows as a symbol held dear by the Hindus must have come in vogue. The invading Islamic marauders targeted soft targets such as temples, women, and cows to insult and demoralise the Hindus psychologically. Later when the British came to India and they were habitual beef eaters, they employed the Muslim butchers (Khatiks) to slaughter the cows.

During the 1857 War of Independence, cow slaughter played a key role in raising the Indian revolt against the British rule. Muslims and Hindus fought the war together as ‘one country-one people’.

When the Congress decided to support the Khilafat Movement to win over the friendship and cooperation of the Muslims in Indian freedom struggle, it compromised on many fronts; cow slaughter was one amongst them. Mahatma Gandhi, though himself was a staunch Hindu and opposed to cow slaughter, had allowed the same practice to appease the Muslims on the plea that their religious sentiments were associated with it.

Dr. K B Hedgewar was the one amongst the few who did not like such compromises with symbols of national pride. He had saved a cow being sold to a slaughterer when he had gone to participate in the ‘Jungle Satyagraha’ in the 1930s at Pusad in Vidarbha. When the prominent Hindu leaders accompanying him pleaded to let the man take the cow, he thundered that for him saving the cow was equally important as participating in the ‘jungle satyagraha’.

The RSS founded by the same Dr Hedgewar has been associated with the mission of cow protection since the early 1950s. The RSS undertook a massive signature campaign to pressurise the Central government to implement the law in curbing cow slaughter. From thence to the latest Vishwa Mangal Gau-Gram Yatra that concluded at Nagpur on Jan 17, 2010, the RSS and its many affiliates notably the Vishwa Hindu Parishad and Bajrang Dal, were at the forefront of the ‘save cow mission’.

The RSS realising the importance of cow for a fundamentally agrarian society like India had launched a special drive to set up ‘gaushalas’ and ‘gau anusandhan kendras’ to conduct scientific research and study in the medical and healing properties of cow dung and urine.

The Muslim Rashtriya Manch (MRM) under the patronage of senior RSS functionary Indresh Kumar took the cudgels against this evil practice and mobilised over 10.5 lakh signatures of Muslims from all over the country on the issue and submitted them to the President. Later, the MRM held an all India Muslim Gaupalak Sammelan in 2015 September at Mewat in Haryana where thousands of Muslims participated in the event and took the vow not to kill a cow and not to consume beef. This was the most welcome move.

But after 2014 landslide victory of the BJP and Narendra Modi becoming the Prime Minister on the single point agenda of development, mushrooming of self-appointed, self-styled ‘gau rakshaks’ vigilante groups was witnessed. As the Prime Minister said most of these groups consisted of ‘anti-social elements’ who wanted to disturb the peaceful social environment and derail the process of development. The Prime Minister is more worried over the unity and integrity of the Indian society because he had given the slogan of “Sab ka Saath- Sab ka Vikaas” that took him to the seat of power. The passage of the GST Bill in the Parliament unopposed is the greatest achievement of the Modi government. Violent incidents in the name of cow protection could derail this process of development initiated by the Government. 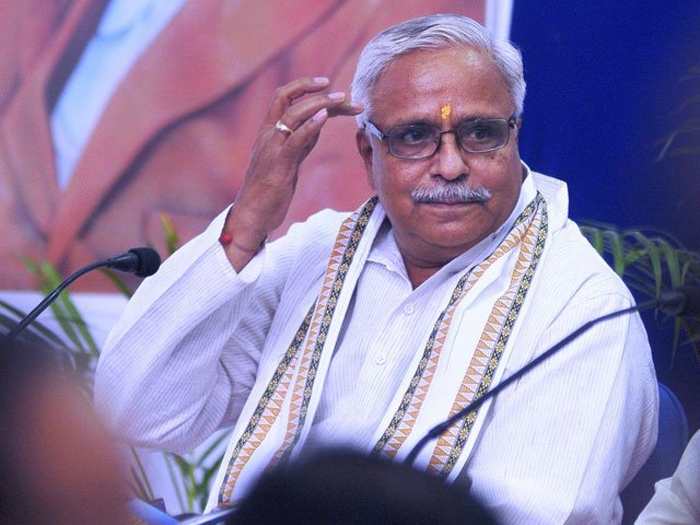 The RSS too, toeing the line of the Prime Minister, issued similar statements appealing the society to stop atrocities, exploitation and inhuman treatment to the Dalit section of the society. RSS Sarkaryawah Bhayyaji Joshi’s statements on Monday clarified the RSS stand on this and appealed the people to ‘expose the opportunist gau rakshaks’ who took the law in their hands. It also urged the administration to take stern action against the perpetrators of crimes against the Dalits.

It has become a practice of the Left-wing intellectuals, writers, and journalists to accuse the RSS of everything that happens concerning whatever is Hindu. The utterances of some fringe leaders, actions of some self-styled ‘gau rakshaks’ or ‘dharma rakshaks’ all have a direct bearing on the RSS and these ‘independent thinkers, writers and intellectuals’ did not lose such opportunities to defame the RSS. Bhayyaji Joshi’s statement on the ‘opportunist gau-rakshaks’ at this juncture would open their eyes and clear the confusion caused by them.

However, Prime Minister Narendra Modi’s warning to these self-proclaimed ‘gau rakshaks’ evoked a very strong reaction from the hard-line Hindu organisations and groups. These groups are so angry that they had even warned the Prime Minister of the possible debacle he would face in future. But Prime Minister’s warning seems to show the results as actions against such self-proclaimed ‘gau rakshaks’ are now initiated in various states. This will bring the desired results and calm down the surcharged atmosphere.

Today much is talked about protecting human rights but there is hardly any talk on protecting animal rights. The cow is not just an animal. She is more than that. She is the mother that fulfils all the desires, requirements of those who serve her as a mother.  There are laws in many states to deal with the illegal cow slaughter business. But the law enforcing agencies are not implementing these laws for a number of reasons. Had the Prime Minister issued directions to these law enforcing agencies to do their duty deftly, that would have toned down the sharp and vicious reactions from these ‘gau bhakts’.

Modi deserves credit for directing these so-called ‘gau rakshaks’ to save cows from eating plastics as that was considered to be fatal for their health. The moot question is whether the hard-line Hindutva groups would see reason in what Modi and Bhayyaji Joshi had said? Or would it fall on deaf ears?