The ‘unholy’ game plan of the ‘holy’ father 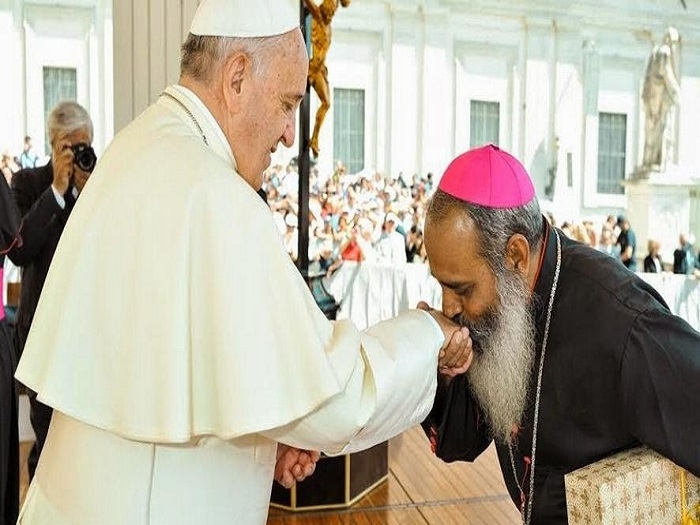 The Archbishop of Gandhinagar Thomas Macwan had issued a letter to voters directing them to vote against the ‘nationalist forces’ and ensure victory of those who ‘remain faithful to Indian Constitution and respect every human being without any sort of discrimination’.

The Archbishop also said: “Secular and democratic fabric of our country was at stake. Human rights are being violated, and constitutional rights are being trampled. Not a single day goes without an attack on our churches, church personnel, faithful or institution. There is a growing sense of insecurity among the minorities, OBCs, BCs and poor etc. Nationalist forces are on the verge of taking over the country.”

The Archbishop also urged the churches and parishes to hold prayers to seek divine intervention for selection of ‘humane’ candidates and defeat of ‘nationalist forces’. “The Bishop of Gujarat state requests you to organise prayer services in your parishes and convents so that people who would remain faithful to our Indian constitution and respect every human being are elected in the Gujarat State Assembly”, the Bishop said in his letter.

Gujarat has a total Christian population of .52 per cent according to 2011 census. This mostly concentrated in the tribal areas of Dangs district and other backward sections.

The election in Gujarat has acquired national and even international dimension as they are seen as precursor to the 2019 General Elections in the country. All the ao-called secular and progressive elements and parties are coming together to defeat the BJP. Gujarat has been under the BJP rule for over two decades – 22 years to be more specific and that too the maximum period was under the leadership of Prime Minister Narendra Modi who is now the elected Prime Minister of India.

After 2002, Gujarat under BJP rule has seen only progress. If you visit Gujarat you can see the progress the state has achieved in these 22 years in a most peaceful atmosphere without any tension communal or otherwise.

This spectacular progress brought Narendra Modi to the helm of the national politics and he became the Prime Minister by adhering to the democratic system. But the church seems to be in no mood to reconcile to this fact. The Archbishop opposes him and the nationalist forces he represents and not a single intellectual, media men or social celebrity had uttered a single word in protest of the letter. Maybe this silence is due to church terror or some other reasons.

The Archbishop has said that the church has emancipated the world from many challenges and now is the time to save Gujarat and India from the clutches of the ‘nationalist forces’.

The recent letter of the Gujarat Archbishop is a naked expression of this rough and undemocratic attitude of the church towards Narendra Modi and the Central Government. The Modi government had tried on a number of occasions to improve the relations with the church but with no positive responses, because the church in India does not tolerate any government that enjoys the support of the RSS. On the other hand, it tries its best to oust such governments from the seat of power by inciting unrest among the different sections of the society. The recent letter of the Archbishop of Gandhinagar Archdiocese is a fresh testimony of this anti-national attitude of the church.

The letter urged the Christian voters to influence the pattern of voting by all means to ensure the victory of the Congress party. However, this is said in an indication without directly mentioning the Sonia-led Congress party. The letter said clearly to elect such persons who have faith in the Indian Constitution and respect every human being.

When the letter was discussed in the media, Archbishop Thomas Macwan accepted to have written the letter and said that it is their practice to issue directives to the people at the time of elections.

The letter addressed to “eminences, graces and lordships” of the churches throughout the country, Archbishop Thomas Macwan has exhorted them to pray for the defeat of the “nationalist forces”.

The Archbishops does not stop at that. He tries to impress that the OBCs, SCs, and BCs are also insecure and seek assurance in favour of the Congress. “Nationalist forces are on the verge of taking over the country. The election results of Gujarat State Assembly can make the difference”, the letter said.

This is the simplest formula that the Archbishop wanted to present to the people to forewarn them for whom they should vote.

This letter issued on November 21 is prima facie communal in nature. This spews venom against the BJP headed by Amit Shah and Prime Minister Narendra Modi (indirectly mentioning as ‘nationalist forces’). Gujarat is communally sensitive state. And the church is adding fuel to this by issuing such ‘directives’ for the faithful.

This letter of the Archbishop has attracted good many reactions on the social media with maximum of them openly criticizing him for issuing such a letter. Many even demanded evidence from him to prove his allegations of violence and attacks against churches.

The letter should be taken very seriously as a shameless affront on our constitution, polity and diversity. The church has a history of violating and trampling human rights of non-Christians. The Goa Inquisition is the best example of this. Should we remind the Archbishop of what his fellowmen did to ancient cultures of the world? They have destroyed and entirely wiped out over 175 ancient cultures from the face of the earth. Is that the religion taught by Jesus of Nazareth? What they did in fomenting anti-national movements in the North-east India is an open secret. Does the Archbishop know this or should he be reminded again?

This letter should serve as an eye opener for the Hindu society also who eulogise the humanitarian activities of the missionaries and the church. The real intention of these activities is to increase their flock and spread the kingdom of the Christ. Churches are keck deep in corruption, conversion and politics. They are supported by the foreign funding agencies and play havoc with the social fabric of our country.

The Legal Rights Observatory (LRO) has filed a complaint against the Archbishop to the Election Commission. “The statement of the Catholic leader is highly provocative and objectionable directly aimed at demonizing certain organisations and obliquely appealing the electorate to vote against the ruling BJP” the LRO has said.

As a Bishop he is holding a religious position and his prejudiced statement is in violation of the RP Act 1951 and thus call for invoking suitable legal action against him, the LRO complaint said adding that the clergy has failed to provide evidences to substantiate his allegations against the nationalist forces.

LRO Convener Vinay Joshi has appealed to the ECI to initiate immediate action against the Archbishop and thwart his attempts to divide Gujarat voters on the basis of caste, creed and religion. The LRO also urged the ECI to investigate the ‘paid news’ angle in respect of newspaper report based on his letter and take due action against those found guilty.

The Election Commission and the government must take serious cognizance of the letter of the Gandhinagar Archdiocese Archbishop Thomas Macwan for deliberately insulting the nationalist forces and inciting voters to defeat them. Does he mean that the Christians in India are not nationalist? This is grossly seditious and the Archbishop deserves stringent punishment for this anti-national activity. That alone will put the things straight in perspective and expose this ‘unholy game plan of this ‘holy father’.