Iram Bahar of Nazibabad, Delhi was married on February 17, 2013. She had all the good dreams of a peaceful and lovely married life with her spouse. But soon that marriage turned into a nightmare with her husband and in-laws troubling her for not bringing dowry. She was ill-treated, beaten and physically abused at times. 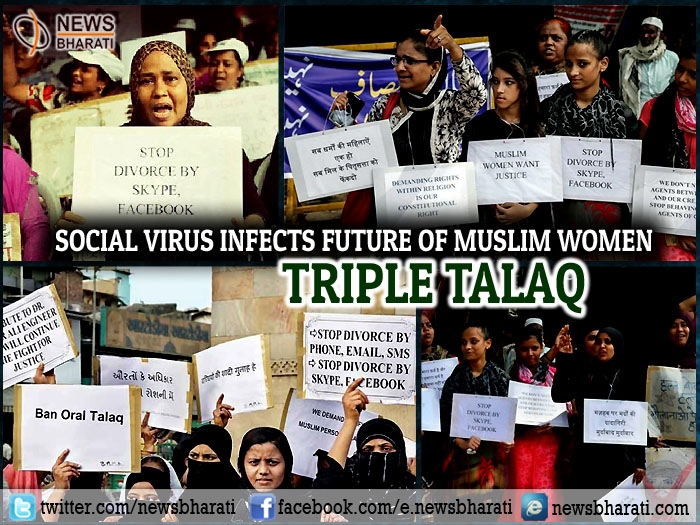 Triple Talaq a curse on Muslim Women: The need of the hour is to deliver justice to a hapless lot of Muslim women whose future is blackened by the social virus called instant triple talaq.

Meanwhile, she was blessed with a beautiful daughter. But finally, four years after the marriage, her husband gave her instant ‘triple talaq’ in one go and that too through an email! This was a major shock to her that ruined her life, shattered her dreams and left her at the crossroads completely baffled and not sure which direction to go.

Her husband is not affected at all. He married another woman and is living happily with her.

Parveen Jahan of Shamli in Uttar Pradesh has a similar story to share. Parveen, a mother of a beautiful daughter, was divorced through the ‘triple talaq’ without giving her chance to be heard.

Iram and Parveen are not the isolated cases.

There are many more cases affected by this social virus called ‘triple talaq’ that has ruined the lives of thousands of Muslim women in India.

Another glaring example of this virus came to notice on Tuesday when a Muslim man divorced his wife with triple talaq in one go in the premises of the court in a UP town! And the helpless woman, a mother of a still lactating baby, has nowhere to go. How pathetic!

The issue of ‘Triple Talaq’ came in the public domain since last few months, more vocally soon after the elections to the state of Uttar Pradesh were announced. UP had voted overwhelmingly for the BJP and its allies in 2014 Lok Sabha elections and when the Assembly polls were announced the BJP was all out to repeat the performance. And it did. By winning 325 seats out of 403, the party has defied most pollsters and psephologists of the day.

The BJP victory blasted the myth of Muslim and Dalit vote banks that helped the Congress, Samajwadi Party, the Bahujan Samaj Party and their secular colleagues like JDU and the Leftist parties. They played their electoral politics exploiting these sections of the Indian society but never addressed their genuine problems – social, political, educational and healthcare related. Instead, they tried to put these sections down under their foot by creating the bogey of rising Hindutva force in the country. But with the approach and attitude of the BJP governments at the Centre and in the state their conspiracy stands exposed.

The massive victory of the BJP in UP and elsewhere in the country was made possible with the contribution of the Muslim women who went all out against the tendency of the Muslim society dominated by the mullas and moulvis and voted in favour of the BJP in the hope that the party will deliver them of the social virus called triple talaq and restore their honour and respect in the society.

And they were not wrong in their perception.

Prime Minister Narendra Modi was the first to raise his voice in support of these talaq-affected women in the Muslim society who were forced to lead a hell of a life for the want of employment and money.

Modi categorically stated that Muslim women are very much the citizens of India and should be governed by the legal provisions of the Constitution in respect of their individual rights and equal treatment.

The Union Government explained their stand on this issue to the Supreme Court and the apex court would be hearing this issue since May 11. There have been countless debates and discussions on the television channels on this issue that generated quite a lot of heat as the parties representing both the sides. The women participating in these debates were more vociferously attacking the clergy and others who supported the triple talaq practice. The most popular ‘Fatah ka Fatwa’ show on Zee News further exposed the hypocrite Muslim clergy by countering them on these controversial issues.

Triple Talaq Written Submission by Centre_07.04.2017 (1) by NewsBharati on Scribd

Prime Minister Modi in his address to the BJP National Executive at Bhubaneswar on Sunday underlined the party and government’s intention to deliver justice to the talaq-affected women. He said that the BJP should address the concerns of Muslim women not by creating conflict, but through dialogue and discussion.

Yogi Aadtiyanath, the firebrand Chief Minister of Uttar Pradesh, too echoed similar views branding those who kept mum on the issue as criminals. He equated them with those legendary figures of Mahabharata who remained in stoic silence while queen Draupadi was being disrobed in the full court of the King Dhritrashtra. Yogi advocated same law for all the citizens making a strong point in favour of the uniform civil code.

However, the All India Muslim Personal Law Board (AIMPLB) has opposed the efforts to abolish this provision of triple talaq. ‘Triple talaq is wrong but valid’ the AIMPLB had stated. The Board had also warned those Muslims who ‘misuse’ the instant triple talaq of ‘social boycott’ from the community. The Board also validated triple talaq by mobile phone message or an email drawing parallel to sending an invitation card.

Stating that there have been large-scale misconceptions about the Muslim personal law, especially the law of talaq, because of the absence of the ‘correct information’ the AIMPLB President Maulana Rabey Hasan Nadvi said, “The correct argument is that the talaq has been kept to save the women from danger”.  “If a few people misuse it, what is required is not a change in the law but the reforming of such people”. But he did not elaborate on what danger it is going to save the Muslim women.

However, this argument was countered by none other than a very senior member of the Board. Prof Mohammad Shabbir, former Dean of Law Department of Aligarh Muslim University (AMU) and an expert on Muslim Personal Law, who was associated with the Board since 1976, four years after the Board was constituted, and who severed his long association in 2016, as he felt ‘offended, disgusted and outraged’ over the functioning of the Board, had in a letter to President Maulana Nadvi dated 21.11.2016 stated, “In contemporary prevailing situation ‘triple divorce’ is creating hardship to Muslim females as it is against the principles of ‘Shariah’ in letter and spirit …Gender justice is under grave attack by the present irresponsible practice of ‘triple divorce’ and polygamy in India.”

He accused the Muslim Personal Law Board of creating a “stumbling block by giving opportunity to others for criticizing Islam and ‘Muslim Personal Law Board’ itself being against the true ‘gender justice’ and ‘human rights’ whereas Islam’s advocacy for ‘gender justice’, ‘human rights’ ‘equality’ ‘fraternity’ etc. stands unprecedented and matchless’.

Muslim Rashtriya Manch (MRM), a social reform movement of the Indian Muslims too had opposed the stand of the AIMPLB. By supporting the practice of ‘triple talaq’ the Board has insulted Islam and the Muslim women. Instant triple talaq is against the Islamic tenets and in violation of the Quran and Hadith. Neither the Prophet nor the scriptures permit such type of instant talaq, the MRM has said.

The MRM has maintained that talaq is stated to be most ‘un-favoured’ crime (na pasandida gunah). Every talaq disturbs the balance of nature and this is a crime. Nearly 22 Muslim countries of the world have done away with this inhuman practice of ‘instant triple talaq’. It is only in vogue in India.

Way back in the 1980s, the Congress party headed by Rajiv Gandhi negated the Supreme Court judgement in the case of talaq-affected Shahbano, just to placate the Muslim vote bank of the party. Again in 2016, when another talaq-affected Saira Bano approached the Supreme Court for justice, the court approached the Muslim religious scholars, ulemas, maulanas, and muftis for their opinion. But instead of giving their opinion, they preferred to stay away and tried to misguide the Muslim society on this issue interpreting this as interference in their sharia law.

The fact is AIMPLB is not representing the entire Indian Muslim community. There is a separate Board of the Shia Muslim, and now Muslim women too have formed their own board. Moreover, the AIMPLB does not enjoy any statutory power guaranteed under the Constitution of India, thus it cannot impose its laws and opinions on the Muslim society. The Muslims are as Indian citizens as the Hindus and other religious groups. They are and should be governed by the law of the land; enjoy all the fundamental and equal rights guaranteed by the Constitution to all the citizens

The need of the hour is to deliver justice to a hapless lot of Muslim women whose future is blackened by the social virus called instant triple talaq. They are looking with great hope in their eyes to Prime Minster Narendra Modi and UP Chief Minister Yogi Aadityanath with a firm belief that they will free them from this inhuman practice and restore their honour and respect in the society. With this hope, they defied the diktats of their menfolk and voted for the BJP in Uttar Pradesh assembly elections.

Now the ball is in the court of the government and the judiciary. The sooner they take a stand on this issue and deliver the Muslim women from this bondage, the better.