The Rohingyas and the dilemma of Indian seculars

Since some months the presence of Rohingya Muslims has been the dominating topic of the public discourse in India. The Rohingya Muslims, who inhabited Myamnar’s Rakhine area, were forced to leave their hearth and homes and take shelter in nearby Bangladesh. But Bangladesh, which is also a Muslim nation, has evicted them from their country. Thus they are left with no alternative but to seek refuge in India. So, today India has a presence of some 40000 Rohingya Muslims who do not possess any legal document of their citizenship.

Union Minister of State for Home Kiren Rijiju has explained in most certain words that these Rohingyas could be a security liability. The government has told the Supreme Court that these refugees have links with terrorist organisations like Islamic State and ISI and permitting Rohingyas would deprive Indian citizens of their legitimate share and lead to hostility.

The Centre also told the Supreme Court that the plan to deport the Rohingya refugees was a policy decision of the government and that the court should not interfere in the matter.

The government’s submission came in response to a petition filed by two Rohingya refugees challenging the Central Government’s decision to send these 40000 people illegally living in India back to their country of origin.

This is fine. The country is not a shelter house for each and everybody. Besides, national security concerns should top the priority list of every government and Modi government has done exactly that. But most secular, progressive, humanitarian, human rights protagonists and leftist political party leaders, their friends in the media and progressive writers have taken up the issue of these ‘hapless’ Rohingya Muslims. They are pressuring the government to give them shelter in India on humanitarian grounds.

The United Nations too, has tried to put pressure the Modi government on this issue and asked the government to accommodate these people.

Leaders like Asaduddin Owaisi are advocating that if refugees coming from Tibet, Sri Lanka, Pakistan and Bangladesh can be given shelter in India why not the Rohingyas? He asked, if famous Bangladeshi writer Taslima Nasreen can be accommodated as ‘our sister’ why can’t be these Rohingyas be ‘our brothers’?

Like Owaisi all these seculars are pointing to the fact that India had allowed refugees from Tibet, most of whom were Buddhists, Hindus from Pakistan and Bangladesh, Chakmas from CHT area of Bangladesh, and Tamils from Sri Lanka in building their argument in favour of these Rohingya Muslims. 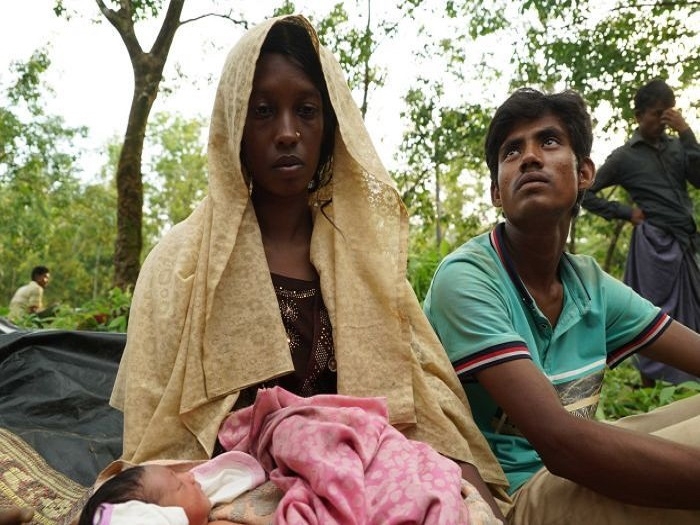 In doing so, they forget one vital point to mention or is it deliberate? The point is why these Rohingyas are leaving their hearths and homes in Myanmar? If violence is the cause, then who started the violence? Who targeted the Buddhist monks and women and children in Myanmar? Why Syu Ki’s government was hell bent on driving out these Rohingyas from their country? Why no Muslim country like Bangladesh is ready to provide shelter to them – their brothers in religion?

The simple answer to these questions is what the government told the Supreme Court on Monday – that these Rohingyas have links with Islamic terrorist organizations like the Islamic State, ISI and Lashkar-e-Taiba.

Myanmar opened a front against these Rohingyas most of whom were ‘terrorists’ and pushed them out of their habitations in Rakhine State. 176 out of 471 villages inhabited by these people have been abandoned so far. Myanmar’s military chief Min Aung Hlaing was quoted by the Indian Express as saying “The violence was an organized attempt of extremist Bengalis in Rakhine state to build a stronghold… They have demanded recognition as Rohingyas, which has never been an ethnic group in Myanmar”.

Myanmar does not recognize them as citizens and looks at them as immigrants from Bangladesh who came and occupied the Rakhine state under the British rule. By the 1982 law they Myanmar government denied them citizenship. There were largescale violence between the Rohingyas and Myanmar Buddhists following which the Rohingyas started looking for safer areas and spread to nearby countries like Malaysia, Nepal, India, and Bangladesh and the USA.

They have formed their armed organization by the name Arakan Rohingyas Salvation Army (ARSA) which engage in armed skirmishes with Myanmar’s security forces while Myanmar maintains that it is fighting a ‘legitimate battle with these terrorists’ attacking its security forces. According to the Indian Express of September 18, 2017, Bangladesh’s military chief has maintained that “chaos was the work of extremists seeking a stronghold in the country”. Bangladesh has taken steps to restrict the movement of these Rohingya refugees for this reason only.

Now with nowhere to go, these Rohingyas are looking at India as the last refuge and here their secular and Muslim friends in political parties and media are ready to plead for their case on humanitarian grounds.

However, the government of the country has made it amply clear that it weighs national security above all and will deport all these Rohingyas from where they came to India illegally.

India is already facing lots of security and other problems with the illegal presence of millions of Bangladeshi Muslims who had sneaked into India since pre-partition days and inhabited the border districts in Assam, Bengal and Tripura and Bihar states. Their large and growing population and their involvement in smuggling, terrorism and violence have posed a bigger security threat to India. As such the government cannot afford to risk nation’s security by allowing these Rohingyas to stay in India and that too in the most sensitive state of Jammu & Kashmir.

In fact, there are some 22-23 Muslim countries in the world. They are members of the UN. So, either the UN should ask them to give shelter to these Rohingya Muslims in their respective countries and share their burden. As followers of Islam, they form the part of Islamic ‘Umma’. Hence, there is no harm for these Islamic nations to provide them shelter. But no Muslim country is coming forward to offer shelter to them, and this is most striking feature. Does it indicate to failure of the “Islamic Ummat’?

Moreover, the Quran says “Love for the country is half ‘Imaan’”. (Hubbal Vatani Nisful Imaan). This binds each and every true Muslim to love his country. Did these Rohingyas love their country and its people? If so, then why there was violence against them in Myanmar? Why they were forced to leave? These are some of the pertinent questions leaders like Owaisi and their friends in media will have to answer before pleading the case of these Rohingya Muslims.

This is the dilemma of the Indian seculars and their media friends.