The alliance of ‘democratic compulsion’ 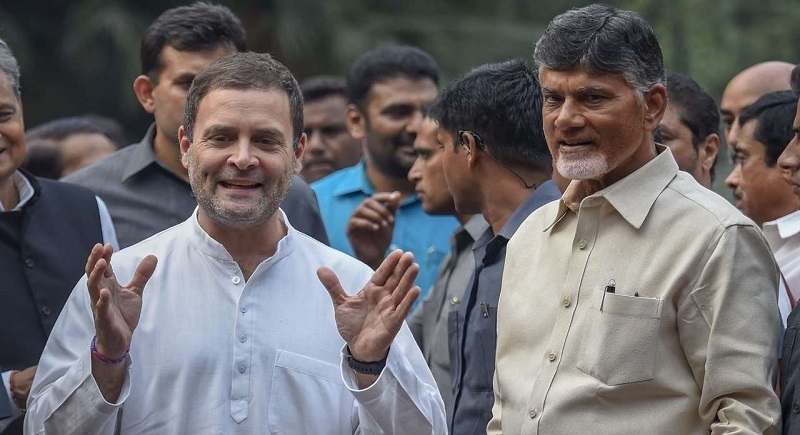 “We have had a past. But both of us agreed that we are not going to get into the past. We are going to talk about the present and future because is critical for our country. We have agreed that the principal idea here is to defeat the BJP and to defend democracy and the institutions of this country. All other ideas will be discussed later.” – Rahul Gandhi commenting on animosity between Congress and TDP (Indian Express, Friday, Nov 2, 2018)

As the 2019 General elections are approaching, every day new political equations are coming up, the latest in the series being the Telugu Desam Party (TDP) and Rahul-Sonia Congress (RSC) initiative. Described aptly as ‘democratic compulsion’ by none other than the main architect of this pact, the TDP Chief and Andhra Pradesh Chief Minister N Chandrababu Naidu, this alliance is born out of the existential fear seriously gripping all the political parties with A to Z variations in their nomenclatures in India at present.

Strange are the ways of politics. See, the TDP was formed by N T Rama Rao in 1980s because the Congress had insulted the ‘Telugu people and Telugu Pride’. Since then, the TDP continued to put up a brave front against the Congress and even fared much better in the 1984 elections held in the aftermath of Indira Gandhi’s assassination. The nation-wide sympathy wave in favor of the Congress that decimated the major opposition party – BJP, could not do much damage to the TDP then. Since then, the relations between two parties were never cordial notwithstanding the Congress background of N Chandrababu Naidu who switched over the TDP in the early 90s, were never cordial. Indira Gandhi had even dismissed NTR’s Government out of political vengeance.


Political connivance of the power-hungry parties

The common factor with this alliance of ‘democratic compulsion’ or can be better described as political connivance of the power-hungry parties consistently raising the anti-BJP and anti-Modi rant. The towering leadership of Prime Minister Narendra Modi is bulldozing all these parties exposing their misdeeds of the past, especially those of the Congress party who ruled this country for over six decades. This Modi juggernaut is unstoppable and will decimate all the opposition, these parties and leaders have realized and hence this alliance of ‘democratic compulsion’.

No vision of future of India

They do not have any vision of future of India. They do not have any idea of the direction to which the winds of change are blowing and are unaware of how these winds will take a shape of a tornado wiping them all out. Even they are oblivious of the ground realities and the groundswell of support for Prime Minister Modi and the BJP.

Years ago, maybe in 1971, when Indira Gandhi went to snap polls in the aftermath of India’s victory over Pakistan and creation of Independent Bangladesh, all the opposition then got so panicky that they came together burying all their differences often stretched to the limits of animosity, to defeat the Iron Lady. But, they had no vision of the future, no concrete program to offer to the masses and no thought to inspire the people to commit and dedicate for nation’s development and prosperity. The rest is the history. Those parties do exist in the history books now.

Hardly our leaders learn from the past examples. That’s why they say history repeats and repeats itself with vengeance’. The present alliance of ‘democratic compulsion’ is the best example to substantiate this statement. It seems strange that the leader like Chandrababu Naidu who has more political experience than Rahul Gandhi both as a leader and as a chief minister of a state which the Congress party bifurcated much against his wishes, is singing praises for a political novice and the most immature person who became the head of a party by virtue of his birth. The only ‘democratic compulsion’ he has is to defeat the BJP and Prime Minister Narendra Modi.

Objective in forming this alliance

And both of them – Naidu and RaGa - have made it clear that this was their only objective in forming this alliance forgetting all the past. Said Rahul Gandhi: “The gist of the meeting was we are coming together to combat the threat posed by the BJP to democracy and institutions of the country.” The Gandhi scion who described this as a “momentous occasion” also said about his meeting with Chandrababu Naidu that they have to defend the future of this country besides saving democracy and democratic institutions which are being systematically destroyed by the BJP and Modi-government.


Naidu, on his part said that this situation had arisen because the Modi government was “destroying all institutions”. He further justified his statement saying: “We want to organize all those parties opposing the BJP…I have been in politics for 40 years. Never before have I witnessed this type of administration. They are demolishing all institutions one by one. RBI, CBI, ED, IT even Supreme Court. I have proposed all political parties have one meeting on common platform”.

Mind the language and observe the tone underlying it. How deep the hatred for one person could go into the hearts and minds of these leaders can just be imagined. And how does the government destroy these institutions? Does Naidu or RaGa have any solid example to offer? Or do they expect people just to believe in their words of imagination?

In fact, if anyone is to be blamed for lowering the prestige and destroying statutory independence of judiciary, CBI, RBI, IB, etc. it is singularly the CONGRESS party. Recall the instances from the past starting from the appointment of Chief Justice AN Ray superseding most senior justices in the Supreme Court during Indira Gandhi’s regime to using all these agencies to curb the Hindutva Movement under the pretext of ‘Saffron or Hindu Terrorism’. The history is replete with so many incidents to show the accusing finger towards the Congress party for devaluing, demoralizing and demolishing the statutory independence of these institutions and not otherwise.

Not only this, what the Congress did with the democracy of this country by imposing internal emergency in 1975 is too well known to the world. Chandrababu and RaGa should have thought over a thousand times before accusing the BJP and Narendra Modi of destroying democracy. In fact, it was the BJP, RSS and other Hindutva groups that put up a brave resistance to Indira Gandhi’s tyranny and restored back the democratic polity of the country. Rahul Gandhi and his newfound love Naidu must know this and if they are not aware they should scan through the history records.

Thank Modi for restoring back the democratic culture

In fact, they should thank the BJP and leaders like Narendra Modi for providing them an opportunity to hurl criticism against them by restoring back the democratic culture and system way back in 1975-77. But for their sacrifice and relentless fight, these leaders would have lost their voices nay even their existences. And they are accusing the BJP and Modi of demolishing institutions and destroying democracy! What a travesty of truth!!

Naidu also met Sharad Pawar, Mayawati, Mulayam Singh Yadav, his estranged son Akhilesh Yadav, Delhi CM Arvind Kejriwal, Sharad Yadav, and all such leaders who would come together to form a formidable (?) alliance against BJP and Modi. Well and good. We must appreciate his efforts to provide at least a workable conglomerate of parties of different political and ideological hues; parties that had fought against each other in the recent past. I wish they succeed.

But there is a great hitch. The major stumbling block in the opposition unity is the issue of leadership. The Congress, which Naidu described as “principal opposition party”, is sure to stake its claim for the common opposition leadership and leaders like Mayawati, Akhilesh and above all the shrewd Sharad Pawar will never allow that to happen lest their leadership claims go unnoticed. Secondly, leaders like Sharad Yadav, Mulayam Singh Yadav and Laloo Yadav are spent up forces. How much they can sustain this pressure of maintaining opposition unity depends only on time and situation. Thirdly, these parties have no vision, no program and no agenda except defeating BJP and Modi. Their Common Minimum Program (CMP) is ‘BJP hatao-Modi Bhagav’. But how they will run the country no one is clear about it, not even they.

In democracy people are the supreme, at least for one day of voting. And though it is just a day, it also the day of reckoning for, they have the power to get the government they want and deserve. In the last four year, the country and its people have seen a sea change in almost every field. The image of India at global level was never as high as it is today. The country’s ranking in the ease of doing business category was never as better as it is today. The atmosphere of overall peace and communal harmony prevailing toady is due to all-inclusive policies of the Modi government. The people have understood that this is the government that has vision, is sincere and honest and non-corrupt. The country is safe and secure in the hands of the leader like Narendra Modi.

It is this popularity for Narendra Modi and the BJP that is driving these leaders so desperate. The fear of very existence is gripping them and out of this frustration that they are taking such steps. But they should bear in mind that people have seen through their game plan of divide and rule. Now they will not allow them to succeed in their mission. The elections to the five states – three of them BJP ruled – are going to polls in the coming month. Their results will be closely watched as they would cast their shadow on this alliance of ‘democratic compulsion’ of the future.