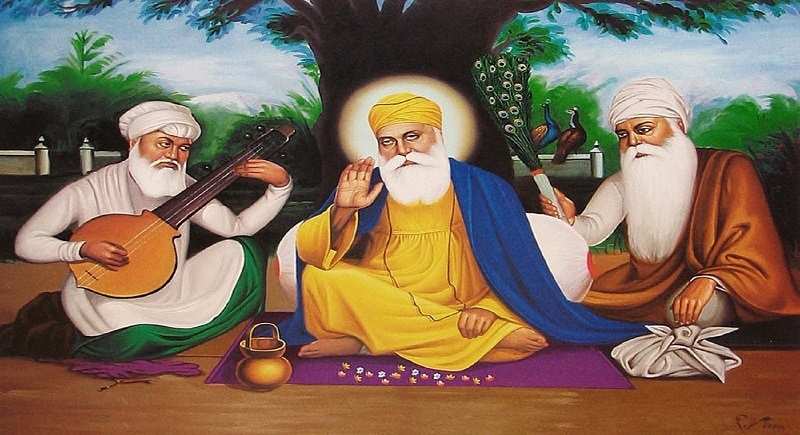 This 23rd November, the whole world is going to witness the beginning of the celebrations of 550th year of birth of Guru Nanak Dev ji. His teachings are meant to be followed by the whole humanity therefore it will not be appropriate to relate him to any one particular religion or faith. Bhai Gurdas, a highly revered Sikh chronicler had written about Guru Nanak Dev’s advent into this world, “Satguru Nanak pragteya, miti dhund jag chanan hoya.” The couplet explains the prevalent environment at the time of birth of Guru Nanak Dev.

Due to incessant foreign invasions, the Dharmic institutions of Bharat were witnessing their diminishing role in guiding the society. The spirituality inherent in the cultural values of this country had started giving way to ritualistic traditions. It is noteworthy that the foreign raiders like Ghazanvi not only destroyed places of worship, they ransacked centres of knowledge also. The universities like Takshashila and Nalanda had been obliterated by the Islamic bigots. A vacuum in the field of knowledge and education had started building up.

There was a complete environment of despondency; masses were fearful and the society had started resembling a rudderless ship. Centres of obscurity had started mushrooming up here and there. Bhai Gurdas had referred to that social environment as “Dhund” meaning fog in which hapless people were rendered directionless. In that background Guru Nanak Dev, who was born in the year 1469 in Rai Bhoi ki Talwandi (presently Nankana Sahib) now in Pakistan, provided “Chanan” meaning light to the people who were struggling in darkness.

It can be stated with conviction that had the entire Bharat started following Guru Nanak Dev’s teachings in totality, there would not have been any subsequent foreign rule and not even European powers would have dared to set foot on its soil. Therefore it becomes very important to know and understand what philosophy he propounded and what messages he gave?

Guru Nanak Dev conceptualised an entire way of life which was based on Dharma and gave the definition of God in such simple terms which was understandable by each and every individual. In Mool Mantra he defined the almighty and his virtues and further established three pillars, Naam japo, Kirat karo and Vand chhako. These tenets are eternal and have universal appeal.

Guru Nanak Dev has defined all the attributes of the almighty in following way. God is one, His name is ever true and eternal, He is the prime doer and creator, He is fearless and without enmity towards anyone, He is of eternal form, He is without birth, uncaused, beyond reincarnation, self-existent and self-illuminating. He can be known with the grace of the enlightened teacher, the Guru.

He (God) was true in the beginning, He was true in the primal age. He is true in the present and shall be true for ever. Guru Nanak Dev’s definition of God is no different than the Rig Vedic tenet of “Ekam Sat viprah bahudha vadanti” which means God is one and the enlightened ones interpret it in various ways.

He had dwelled on virtues of God in such simplistic way that confusion from the minds of the masses was washed out and they started denouncing various obscurantist schools of thought and turned spiritual in day to day life.

In the comprehensive concept of Naam japo, Kirat karo and Vand chhako, Guru Nanak Dev has propounded a perfect and noble way of life. It is important to understand all three tenets.

He exhorted humanity to always meditate on Supreme Being. By doing so man will be able to thwart the negative energies like Kaam, Krodh, Lobh, Moh and Ahankar (Lust, Anger, Greed, Attachment and Pride or Ego). Singing devotional hymns glorifying the formless God cleanses and purifies human minds and creates virtues like love, compassion, kindness and forgiveness in the human society.

Kirat karo means the human beings should earn their livelihood by doing hard work and should not become a burden on the society by becoming idle and inactive. Bhagwad Geeta’s sermon of Karma has been put forward in very lucid and practical way for the masses. It is also noteworthy that in Guru Nanak Dev’s time, asceticism was on the rise and in pursuit of salvation, many people were abdicating social life and had been migrating to hills and jungles for meditation. Guru Nanak Dev was a staunch advocate of a rightful family life and propounded that while remaining in Grahasth Jeevan (Family life) one should pursue the goals of spirituality. He himself got married to Mata Sulakhni at the age of 18 and had two sons, Sri Chand and Lakhmi Chand.

The effect of Guru Nanak Dev’s teachings can be found in practical terms today; the followers who are known as Sikhs are living example of his philosophy of earning one’s livelihood by doing “Kirat”. The community which is spread throughout the world is epitome of self-respect and hardly one can find any beggar in it. Most of the people in north and north-western Bharat used to and are following his teachings. The millions who got displaced after the formation of Pakistan, were rendered penniless but due to their unflinching faith in the tenet of “Kirat” they resettled themselves and are again leading prosperous lives.

This is another tenet of the great teachings of Guru Nanak Dev which can be considered as golden principle for blissful life. Vand Chhako means one should share its resources with fellow human beings. This is the principle of trusteeship in which the great Guru espoused that our material possessions have been bestowed upon us by the almighty and should be shared with those in need.

The tradition of Langar (Community meal) was started by Guru Nanak Dev and later institutionalized by other Sikh Gurus. Langar is not just serving food to others; even medicines and other essentials are provided by the Gurdwaras to the needy.

Another aspect of Langar reflects upon egalitarianism and equanimity; people from all castes, religions, faiths and classes sit together to take Prasaad (Food) in it. If the tenet of Langar is imbibed by the humanity at large, it can solve a whole lot of its problems; no individual will sleep on empty stomach and principle of trusteeship will go a long way in conflict resolution.

The Varna system, which was created to divide the duties among various segments of society, had awfully degenerated into casteism and lives of the people belonging to lower castes were turned miserable by some inhuman and irrational elements of the society. The fault lines of the then society were exploited to the hilt by the invaders and they started doing conversions with aplomb.

In that social background, Guru Nanak Dev rejected the casteist practices and as Bhai Gurdas wrote about him, “Charo varan ik varan karaya”. That means Guru Nanak Dev amalgamated all four Varnas into one and sermonised that all humans are equal and nobody should be discriminated against on the basis of caste, creed, religion or faith. He repudiated the Kshatriyas of that time for not protecting the society and the country from foreign raiders and wrote, “Khatriyan dharam chhadeya” means the Khatris (Kshatriyas) who were given duty of protection by the society abandoned it and allowed invaders to desecrate this land.

Guru Nanak Dev was absolutely fearless and taught his followers also to be brave and courageous. During his lifetime, Bharat had to witness numerous invasions by Babar who finally after defeating Ibrahim Lodhi in the year 1526, became ruler of this land. Babar and his army of plunderers had unleashed a reign of terror about which Guru Nanak Dev’s Babarvani appears in Asa di vaar in holy Guru Granth Sahib. He writes, “Khurasan kasmana kiya, Hindustan daraya, Aiti maar payi kurlane tain ki dard na aya” In this couplet, Guru Nanak Dev is asking from God that Babar after ransacking Khurasan had tormented Hindustan and when people were facing tyranny were you not moved?

He had addressed Babar as jabar; that means someone who was a tyrant and a terrorist. There was resurgence in the masses and people started thronging the places where Guru Nanak Dev was doing Kirtan with two of his disciples, Bala and Mardana. He travelled farand wide and spread the message of humanity and non-duality of God.

Udasi means travel and Guru Nanak Dev travelled in all four directions to interact with people and clear confusion in respect of celestial as well as terrestrial matters. First Udasi was towards east and he travelled till Kamrup and Burma; second was towards south when he reached Sri Lanka; during third one, he traversed through Kashmir, Tibet and reached till Tashkent; in the fourth Udasi he went through most of the Arabian peninsula, and stayed for some time at Mecca also. In the fifth and final travel, he visited most of the places in Sindh and undivided Punjab.

It is worth mentioning that wherever he went, he invited the intelligentsia to debate with him and presented his philosophy in most scientific and logical manner. That precisely is the reason Sikh faith does not believe in miracles, superstitions and obscurantism.

Guru Nanak Dev can be considered as the biggest advocate of women emancipation and empowerment of his times. Woman was considered as weaker gender because of various reasons. Major reason was attacks from north of Bharat when Muslim armies not only indulged in mass rapes and used to abduct women to pack their harems and auction them in the bazaars of Ghazni. In order to protect their honour, people had started killing female progeny at their birth only. Sati practice too had spread to bigger proportions.

Guru Nanak Dev’s teachings went a long way in restoring honour of the women. No wonder, later when Sikhs constituted armies, women fought valiantly alongside with male counterparts. In Guru Granth Sahib, in one of his Shabads (Hymn), he writes about glory of women, “So kyon manda aakhiye jis jamme raajan” That means why somebody who gives birth to even the kings should be debased?

In today’s context, people should remember teachings of Guru Nanak Dev and consider women as pillars of strength for the family and not a liability. Unfortunate practice of female foeticide can be countered with remembrance of the great Guru.

It can be hoped that when Government of Bharat is celebrating 550th year of birth of Guru Nanak Dev, world over, seminars, symposiums and talks will be organised in which his teachings will be discussed and his message of peace and love for humanity will be disseminated.