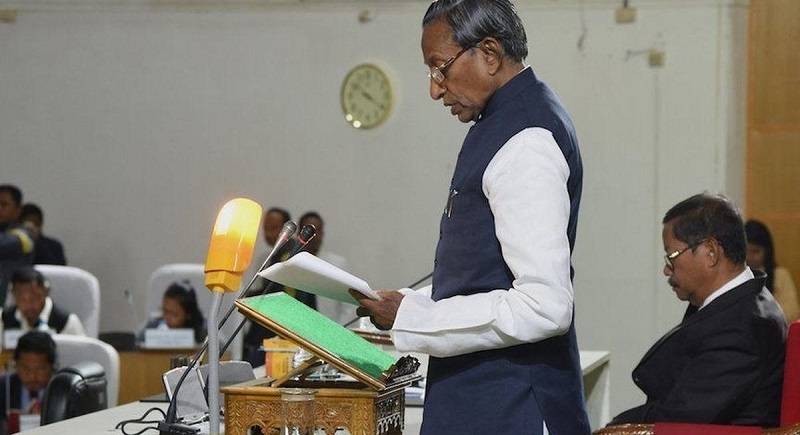 The Governor of Meghalaya Ganga Prasad faced a barrage of criticism when he delivered his maiden speech in the National language in the Meghalaya Legislative Assembly. Even one of the legislators abruptly walked out of the assembly hall while the Governor was digression the session. Thus, the Governor was intensely scoffed at and humiliated through the social media and other news media.

Well, everyone has their right to disagree and criticize. Of course, we do not disagree that the majority of people in Meghalaya are not fluent in Hindi. This is not a big deal. But disrespecting the language could be.

This news also made many of my face book friends abroad pretty curious. One very learned scholar - Avital Markel from New York speaks out her mind with a dose of humor: ‘Why is there so much noise when your governor delivered the speech in the language which is originally from India itself? I know another popular name of this country as Hindustan, not “Englistan”, I believe.’

Another Yoga teacher from Las Vegas -- JM Palmer remarks -- ‘It’s ridiculous that people can disrespect their own language. I can easily pronounce a good many Sanskrit terms. I personally have tremendous respect for India’s Sanskrit and other languages because they are the languages of Yoga and wisdom of spiritual dimension’. Palmer is a spiritual seeker who regularly visits India.

I think both Avital and Palmer views resonate with what the citizens of other countries feel. At least with those who have not been insanely fascinated by the English language like some Indians do. It’s much observed in the country that one without English speaking skills is obviously looked down upon. The ‘inferiority complex’ vis-a-vis the West and its external trappings often hold many Indians back in asserting that they are Indians. This syndrome is getting more pronounced among the certain class of intellectuals and the snobbish folks. This has already taken a very ugly shape. The trait of sedition is quite noticeable amount the certain class of citizens.

Anyway, if we have regularly tolerated these bunches of fraudsters, rapists, and murderers in the parliaments and state assemblies in the country, why could we survive a speech of few minutes in Hindi and so on?

On the contrary, the citizens of very developed nations such as China, Russia, Germany, Portugal, and France will never lose their calm when their leaders speak in the native languages. Actually, they all speak their own languages. The imperialist British till the date has literally failed to cast its spell on them. The citizens of those self-reliant countries rather swell their chests and claim their superiority and what they are due for.

If I am not mistaken Hindi is still recognized as the national language of the country. So, even if we are unable to learn the language, it would do jolly good if we do not disrespect it at all.

Here it will be quite relevant to cite a case of the Prime Minister Narendra Modi’s speech at United Nations General Assembly. I believe, nobody walked out of that international summit on 27th Sept 2014 when the Prime Minister delivered his speech in Hindi. Thank God, we didn’t have any leaders from Meghalaya who might have cringed with embarrassment and walked out!

That particular speech by PM Modi in UN was so applauded that it subsequently served to motivate the member countries across the world to vote in favor of declaring the International Day of Yoga on 21st June.

Incidentally, Hindi is a very powerful language, if we go deeper. This language is so self-sufficient that it is one of the direct descendants of Sanskrit, the oldest and the perfect language in the world. On the robust ground of India’s Sanskrit the Modern linguistic stands. Kudos to those unprejudiced and rational intellectuals such as Sir William Jones, Johann Goethe, F. Schiller, Franz Bopp, F. Schlegel, Ferdinand de Saussure, Leonard Bloomfield, Noam Chomsky who discovered the incredible literary gems in the languages of India.

Finally, for those who sniff at the languages of Indian origin and the wisdom and culture associated with them, I would like to share just one opinion by their much celebrated English master. Here exclaimed the American British Nobel laureate TS Eliot: “Two years spent in the study of Sanskrit under Charles Lanman, and a year in the mazes of Patanjali's metaphysics under the guidance of James Woods, left me in a state of enlightened mystification.” I think we should not walk out of the “truth”. India has for ages been enriching the intellectual treasure troves of the West. But, what is a huge paradox is that our Indians are either not aware of it all or they do not want to acknowledge it.