“Save Constitution” drive a ridiculous attempt to “Save the Dynasty” 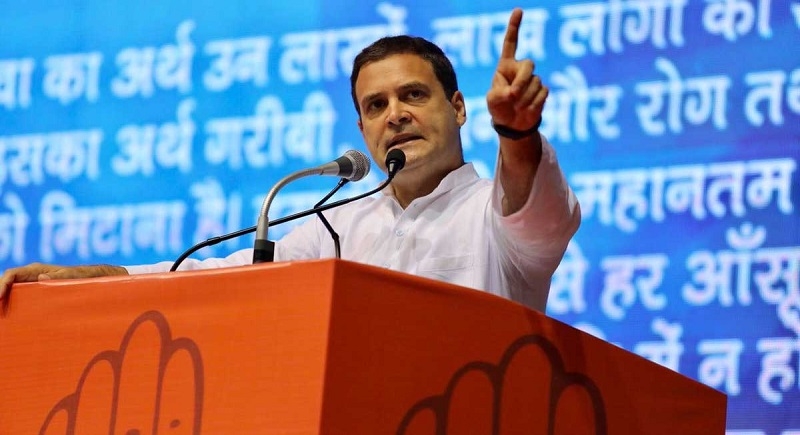 Congress is at its old game again, this time in the name of ‘Save Constitution’ campaign. The Congress leaders are trying to spread the caste, religion and language differences for breaking the Indian society because that suits to their ulterior political designs. The language Congress President Rahul Gandhi and his cohorts are using against the Prime Minister is indicative of the hatred they have deeply rooted in their hearts for Narendra Modi, the BJP and the RSS.

The purported move of the Congress party to ‘Save Constitution’ is nothing but a ploy to mislead the people of the country. In doing so, the party is making itself a laughing stock in the eyes of the people. The history of Independent India is replete with incidents where the Congress party and its leaders twisted and bent the statutory institutions for the benefit of one family.

Rejection of impeachment motion against the Chief Justice of India brought in by the Congress party along with six other smaller parties that do not enjoy sufficient majority in the House, actually forced them to take this step. The Congress leaders said that the decision of the Vice-President Venkaiah Naidu, who is also the Chairman of the Rajya Sabha, violated and insulted the Constitution and that there was a need to ‘Save Constitution’.

So, launching the ‘Save Constitution’ or ‘Save Rahul’ (?) campaign from the Talkatora Stadium in New Delhi on Monday, Congress President Rahul Gandhi targeted his criticism against Prime Minister Narendra Modi. RaGa alleged that the BJP was out to destroy all the statutory institutions granted by the Constitution that Dr Ambedkar gave to the country. Referring to the press conference addressed by the four senior judges of the Supreme Court of India the Congress President pointed how the judges had to approach the people to seek justice. Modi government is trampling the Supreme Court, undermining the Parliament and destroying the democratic texture of the society. What Congress achieved in 70 years for the country is being destroyed by the Modi government in last four years the Gandhi scion lamented.

Commenting on the campaign Assam's minster Himanta Biswa Sarma said that this was a laughable attempt. In twitter message he said when the party spoke of constitution, it appeared to be a farce.

The institutions built by the Congress in last 70 years, are being systematically destroyed by the Narendra Modi Government; Dalits are being subjected to torture, women are molested but the Prime Minister is keeping mum, Rahul Gandhi said adding that people with RSS background are running the country. “We will not allow them to destroy these institutions. We will not allow them to touch the Constitution”, Rahul Gandhi said.

And what did the Congress do with the Constitution in the past? Does Rahul Gandhi know the history? It was Pt Nehru, the first Prime Minister of Independent India brought in the first amendment to the original constitution limiting the right to freedom of speech and expression, allowed the imposition of state monopolies and limited the right to property by inserting articles giving constitutional protection to the ‘land reforms’ in 1951 well before the first general elections were held.

The Constitution of India has been amended for over 100 times in the past. The most important of them was the one introduced after the emergency in 1975. The then Prime Minister and Rahul Gandhi’s grandmother Indira Gandhi even changed the ‘preamble of the original document by inserting words like ‘socialist’ and ‘secular’. She used the constitution to justify imposition of emergency to save her power and post. Has Rahul Gandhi forgotten this?

Congress party has brought the impeachment motion against the Chief Justice. But what is its track record. In 1973, ignoring the claims of the senior judges like Justice J M Shelat, Justice K S Hegde, and Justice A N Grover, Justice A N Ray who was at the fourth position in seniority was promoted as Chief Justice of India by Indira Gandhi. And to justify this unconstitutional decision a senior Congress leader said that the government has to take into consideration the ‘philosophy and outlook’ of the person concerned. And when he said ‘philosophy and outlook’ it invariably meant surrender to Gandhi family and nothing else.

The same story was repeated in 1975 when Justice H R Khanna was sidelined and his junior Justice Shamshad Beg was made Chief Justice of India because he had his commitment to the Gandhi family only. Thus, history is replete with such incidents where the Congress party twisted the judiciary as and when it wanted to do so. The present impeachment attempt, though unsuccessful, was an attempt to weaken the statutory institutions of the country and needs to be condemned.

As BJP President Amit Shah has said this attempt of the Congress party was a part of the larger trend to demonise and weaken every institution that seeks to maintain its individual identity and not to bow to the dynasty.

Dismissing the ‘Save Constitution’ campaign of the Congress party as a ‘farce’, BJP President Amit Shah said “history is replete with examples of Congress mangling constitutional institutions of the country to protect tge interests of just one family”. This ‘irresponsible action’ of the Congress party, Shah said in a statement, came as a reminder of the effort by the Congress to control the judiciary before and after the Emergency.

The Congress also attacked the Election Commission, the EVM, when they lost elections after elections in the states. But surprisingly when they won by-elections, there was no allegation against the EVM.

The Congress had also attacked CAG when the institution exposed the mega scams under the UPA regime. The CAG report brought about a grand awakening in the country about corruption in high places. The party had also raised question mark over the bravery of our soldier in carrying out the surgical strikes by demanding the ‘proof’ of it.

Emergency was the darkest period of the Indian democracy post-independence during which Indira Gandhi used or misused the constitution to save her position and power destroying and weakening all the statutory institutions. June 25th, 1975 was the darkest day in the history of independent India when the entire country was held to ransom to save just one family. How the Congress party behaved with its opponents in those 19 months is well recorded in the history. Rahul Gandhi should read that history to know the truth.

This is ridiculous on part of the Congress party to talk of ‘saving the constitution’ when the party itself had indulged in anti-constitution activities on a number of occasions by targeting judiciary, army, election commission, CAG, and even the parliament. India’s constitution given by Dr Babasaheb Ambedkar is very strong and astute and matured. The Congress campaign in the name of ‘Save Constitution’ is nothing but a farce and a shameless attempt to save the dynasty and its fast diminishing political credentials.