“Only a piece of land cannot be called a nation. A nation is created where people of one thought, one culture, and one tradition live together since ancient time. RSS is a group of swaymsevaks who want to sacrifice life for the development of true nation”.

This diallogue from the play “Hum Kare Rashtra Aardhan” clearly highlights the genesis and philosophy of RSS. The play was staged Saturday by Persistent Systems and Sri Mahalakshmi Productions. Written by Avinash Ghangrekar and produced by Kanchan Gahangrekar the play was effectively directed by Subodh Surjikar.

The presence of Sarsanghchalak Dr Mohanrao Bhagwat was most inspiring for the artists. Nagpur Mahanagar Sanghchalak Rajesh Loya, his predecessor Dr Dilip Gupta, and senior RSS swayamsevaks witnessed the play that unfolded the saga of the RSS with events that some of them had lived with, for the next two and half hours evoking applause and admiration from the audience.

The play was based on the evolution of RSS and life of its founder Dr Keshav Baliram Hedgewar and his immediate successor M S Golwalkar alias Sri Guruji. The way and style it was presented the drama succeeded in rekindling the inspiration and an unstoppable urge to work for the nation through the RSS amongst those present in the packed Kavikulguru Kalidas Auditorium of Persistent Systems in IT Park Nagpur on that Saturday evening. It is a must watch play for every swayamsevak and every potent swayamsevak to understand the genesis, philosophy, ideology and working system of the Sangh.

The drama highlighted on the qualities of a social and cultural organization that distinguishes RSS from the other similar organizations of the contemporary times. The play unfolds the need for starting the Sangh to unite the Hindu society that is answerable to the status of our motherland. Dr Hedgewar, a born patriot, had worked with the revolutionaries, the non-violent satyagraha model of Mahatma Gandhi, tried his best to set up a volunteer force within the Congress but sans success and finally decided to start the Sangh with handful of his close associates with a huge dream of organizing the entire Hindu society spread from Kashmir to Kanyakumari and Gujarat to Assam, all this is very remarkably displayed by the artists who played the role of Dr Hedgewar and his friends.

The visit of Dr Babasaheb Ambedkar to RSS camp in Pune, the dialogue between Mahatma Gandhi and Dr Hedgewar that succeeded the former’s visit to the RSS winter camp in Wardha, Dr Hedgewar’s participation in ‘Jungle Satyagraha’ and his untiring movements to take the message of RSS to every nook and corner of the country even at the cost of his health has been vividly painted by the artists. 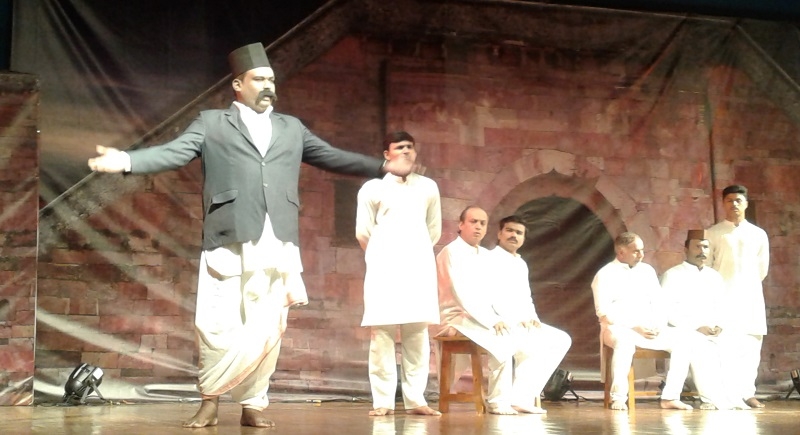 The most revealing was the incident of Guru Pujan program. Every swayamsevak was thinking that they would be asked to worship Dr Hedgewar and make offerings to him. But to their surprise Dr Hedgewar explained them how and why the Sangh has not accepted any individual as ‘Guru’ but the Saffron Flag (Bhagwa Dhwaj) is our ‘Guru’. To the perplexed swayamsevaks, Dr Hedgewar explained that any human being, however great he may be, is not and cannot be perfect. He is bound to succumb to pressures, attractions and allurements. Therefore, the Sangh has decided to place the Bhagwa Dhwaj as its Guru.

Narrating the importance of this symbolic guru, Dr Hedgewar, whose role was effectively played by Abhishek Bellarwar, says: “Seeing the Bhagwa Dhwaj, the entire history of the nation along with its traditions and culture come alive in front of us. The mind rises and special motivation comes in it. That is why we have accepted this Bhagwa Dhwaj as our Guru, a symbol of our tattva.

“The Bhagwa dhwaj represents our history, tradition and supreme sacrifices made by our ancestors for our nation. It is the embodiment of all the fundamental elements of our

The last speech of Dr Hedgewar before the swayamsevaks who had gathered for the RSS summer training camp in Nagpur was very touching. Dr Hedgewar was bedridden and prohibited by the doctors attending him from going to the camp. But on the last day he insisted that he should be allowed to go and meet the swayamsevaks. Sri Guruji takes him to the camp, where he addresses the swayamsevaks and asks them to remain swayamsevak forever. “Work for the nation and fulfil the mission. Do not say at any point of time that “I was a swayamsevak once upon a time”, he appeals to them in a choked voice. A very touching scene indeed! 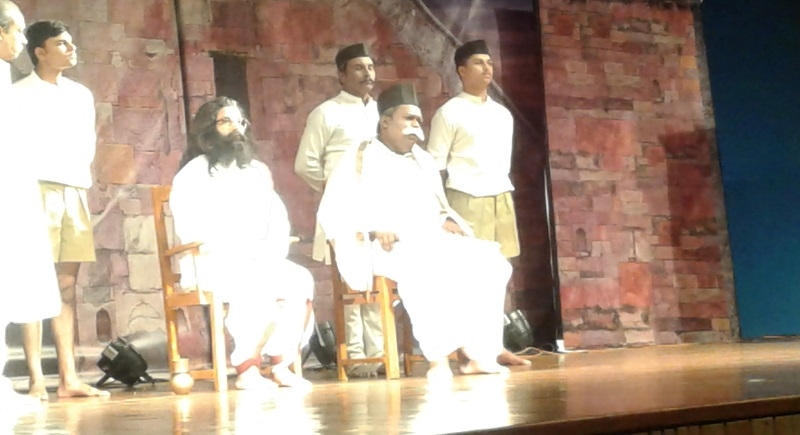 After Doctor Hedgewar’s demise Sri Guruji becomes the Sarsanghchalak as per the wish of Dr Hedgewar. He appeals to the youth to sacrifice their time for the sake of motherland. “This is our sacred land called Bharat, a land whose glories were sung by the Gods, a land visualized by Mahayogi Aurobindo as the living manifestation of the Divine Mother of the universe, Jaganmata, Aadishakti, Mahamaya and Mahadurga who has assumed the concrete form to enable us to see Her and worship Her, a land worshipped by all our sages as Matrubhumi, Dharmabhumi, Punyabhumi, Karmabhumi and Devabhumi and Mokshbhumi”.

The play narrates the incidents of RSS and 1942 Quit India Movement, 1947 Partition and Independence and the exemplary sacrifices offered by the RSS swayamsevaks to save Hindus from Pakistan and bring them safely to India even at the cost of their lives. The role played by Sri Guruji in convincing the Maharaja of Kashmir to join the Indian Union, the subsequent murder of Mahatma Gandhi and the ban on RSS, the satyagraha by Swayamsevaks and lifting of ban, the role of swayamsevaks in 1962 India-China War and 1965 India-Pakistan war, Prime Minister Jawaharlal Nehru’s invite to RSS swayamsevaks to participate in 1963 Republic Day parade, Lal Bahadur Shastri’s insistence that Sri Guruji attend the War Council meeting in New Delhi and making special arrangement for him to reach Delhi in time, formation of Vishwa Hindu Parishad, and many such incidents were effectively mentioned and painted vividly by the artists of the play. 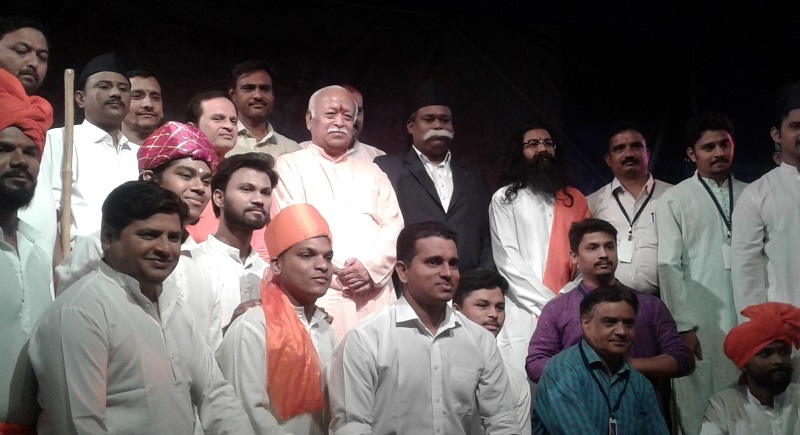 This is first of its kind of the play that tried to trace the genesis and growth of RSS in a most effective style and method. Yet there are certain grey areas that need some improvement and fine tuning. A professional touch will also make it more effective and impressive. All said and done, the play, the artists, the director, the writer and producer deserve huge congratulations for presenting such a difficult subject in a most effective manner and style.

Abhishek Bellarwar played the role of RSS Founder Dr Keshav Baliram Hedgewar, Amol Telpande presented the personality of Sri Golwalkar Guruji, Prashant Mangde played Mahatma Gandhi besides 25 other artists who performed their roles in perfect cohesion and coordination under the direction of Subodh Surjikar. The play was produced by Kanchan Ghangrekar, sound recording was done by Charudatta Jichkar, <usic by Pushkar Deshmukh, Coordination by Samir Thodge and Management was looked after by Asif Bakshi.