PM Modi stoops down to lift the environmental awareness 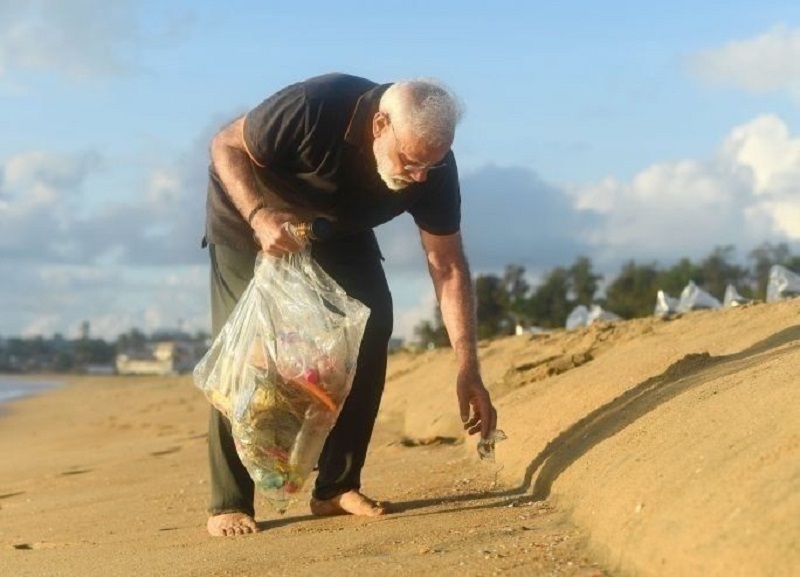 We should not hold back from doing the right thing, more so when the situation is getting worse with every coming day. Truly, for numerous reasons, our planet earth is not the same as the one we inherited 50 years ago. We can see a vast difference in the climate now and that of a half-century ago. We have badly messed up with everything Mother Nature has given us. In many states in India the temperature has almost touched 50 – degrees in summer. It is ominous. Many warning bells are repeatedly being told by the environmental scientists.

Frankly speaking, the major changes in our lifestyles and practices are to be blamed. Our occupations and the business, and its related production units that send the “smoke” up must be stopped forthwith. The “greed of capitalists” alone has in fact pricked the body of the ecology. It has blackened the atmosphere; it has punctured the ozone layers!

Anyway, the good news is here. To litter our surroundings is a criminal offense now in some of the states in India. Hope we can heave a sigh of relief. Let that be both in letter and spirit. More than anything we have littered and contaminated our "water bodies", which is ecologically the worst thing ever. Its deleterious impacts upon the environment are very diverse.

In the past three months, I’ve had hot exchanges with a number of people wanting to dump their garbage to the nearby drains/streams. I tried a lot to convince them. Many became convinced too and but some are exceptionally brute. I wonder how we describe this brand of people! What is very disgusting is that the people with impunity throw the hard-woods, shoes and heaps of clothes, apart from the reeking stuff inside the plastic bags, into the peacefully flowing streams/revers/seas. Some just throw grocery sacks full of garbage into the drains. This is outrageous; it should be held as an “ecological sin”. Such folks can hardly think that garbage can cause the blockage to the drain. Their cerebral nerves must be invariably blocked. They can’t think anything that happens next due to their own acts. There are many NGOs and academic institutions which are serving as watchdogs. They are dedicatedly working to create environmental awareness among the general people. They all deserve a pat on their backs.

Look how PM Modi himself stooped to pick up all discarded empty plastic bottles, plates and other garbage recently at Mamallapuram beach in Tamil Nadu. Through this he wanted to convey the clear message to each and every citizen of India that we as an individual citizen must come out to clean our houses, our surroundings and water bodies. He is indeed leaving no stone unturned to sensitize the citizens. Of course, ever since he took over the charge of the highest office, he has been going hammer and tongs at the awareness campaigns of healthy living and mitigation of ecological hazard.

Very importantly, what one feels is that all concerned administrative authorities, all police departments and the conscious citizens must wake up and come out with brooms. Also, let’s capture the pictures of those who commit “criminal offence” of garbage throwing into the drains/streams/seas on our cell phones. We have taken meaningless selfies all these days, now let’s take the snapshots slyly who defile the very face of mother earth. Let’s all act as active whistle-blowers. Let such implicating pictures be shared with Municipality and the Police Department.

It is worthwhile, apart from the heavy fine; let’s have regulations that the offenders be completely barred from driving their vehicles and operating the bank transaction for a period of one year and the like. If similar acts are repeated then they are further barred from other public facilities as a citizen. These kinds of punitive measures can be a very effective deterrent. What more, if possible, those “pictures of the messy offenders” be “published” in the print media and social media. One is confident that the media houses can play a lead role by exposing unhealthy practice of the offenders. Let they all be burned with shame so that other will not repeat the dirty offence again! Come on, do not mess around any longer. Moreover, PM Modi himself is stooping down to lift the image of India!