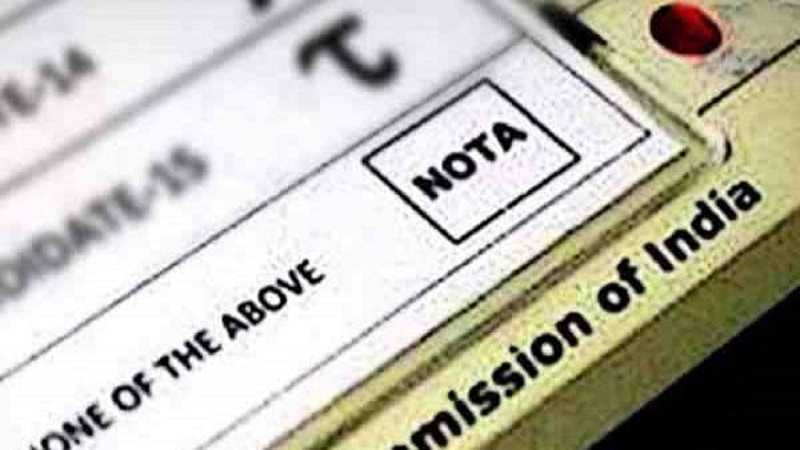 “None of the Above (NOTA)” proved the giant killer in the recently concluded Assembly elections in Maharashtra upsetting the apple cart of Bharatiya Janata Party (BJP) and Shiv Sena (SS) combine though the voters reposed their faith in this combination by giving them 161 seats together.

The state Assembly elections were held on October 21 and results were declared on Oct 24, 2019. During the campaign the BJP and SS leaders were boasting of capturing 200 plus or 220 seats. But the as the results were announced, the BJP-SS election war cry of ‘Ab ki baar 220 paar’ remained a far-fetched dream. The combine had to satisfy itself to a total of 161 seats.

The Nationalist Congress Party (NCP) led by octogenarian Sharad Pawar resurfaced with a relatively better performance with 54 seats in its kitty while the Congress party that was totally in loser’s mood surprisingly bagged 44 seats staging a comeback. The NCP had won 41 seats in 2014 while the Congress was just one seat ahead by winning 42.

Vote share and mood of voters: The vote share of these major parties also reflected the resolute mood of the electorate to bring back the BJP-SS combine to power based on their past term’s experience. The BJP polled 1.41 crore votes this time i.e. 25.74% of the total votes polled. It is true that this figure is less than the 1.47 crore votes polled by the party in 2014 thus resulting in a drop of 2 percentage points in in its vote share in 2019. But the BJP contested 260 seats in 2014 and won 122 with 27.8% votes.

During the Lok Sabha elections held in April-May this year the BJP had registered a lead in over 200 assembly segments with a highest vote share of 27.59% which was closer to its 2014 performance. Based on this position, the party exuded confidence of wining over 200 seats in the assembly polls.

One remarkable feature is that these four major parties had contested the 2014 assembly elections separately and tried their strength. BJP-SS formed an alliance after the elections while NCP-Congress preferred to retain their independent identity. This might have helped them to increase their vote share individually.

In 2019 BJP-SS formed the pre-poll alliance and after many deliberations agreed to share the seats amongst them under the formula of 162-124 seats. Out of these the BJP contested 150 and gave 12 seats to its other smaller allies while the SS did not share any of its 124 seats. Out of these, the BJP won 105 and SS 56 taking the tally of the combine to 161 far ahead of the midway 144 mark in the 288-member Maharashtra Assembly. 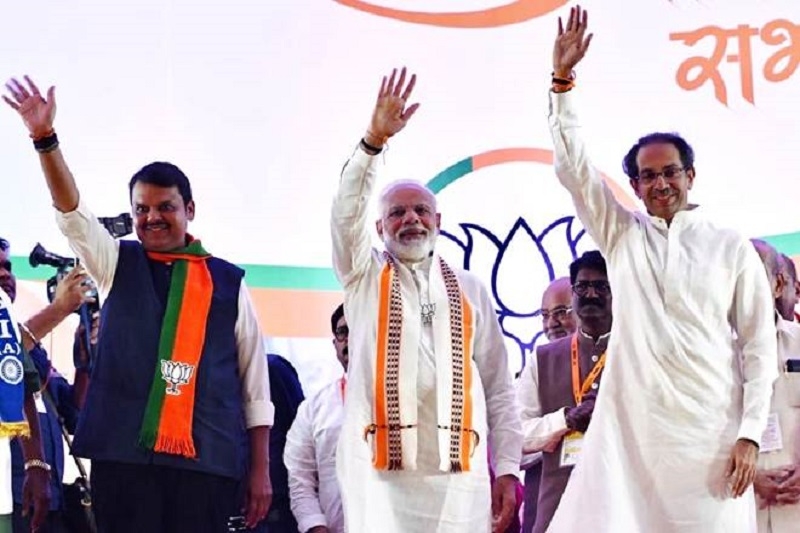 The NOTA factor: However, increasing number of votes polled in favour of ‘NOTA’ (None of the above) option is a matter of serious concern for all those who believe in sanctity of democratic system. It becomes all the more serious when the votes polled for NOTA occupy the second position in a constituency! And this happened in Maharashtra assembly elections!! Latur assembly constituency from where Dhiraj Deshmukh, son of former chief minister the late Vilasrao Deshmukh got elected by over a lakh votes, has recorded highest NOTA votes numbering 27,500 and occupying second position. The candidates of BJP and other parties came third or fourth in the row forfeiting their deposits.

The NOTA votes in this election have increased with 7.43 lakh voters choosing to register their protest for selecting ‘wrong’ candidates by various political parties. To cite an example, let us take a look at two prestigious constituencies of Nagpur and Pune. Nagpur being the home turf of chief minister Devendra Fadnavis and Pune being the stronghold of NCP and secondly, the state BJP president and Revenue Minister Chandrakant Patil chose to contest from Kothrud in Pune.

In Nagpur district, there are 12 assembly segments – six in the city known as ‘Second Capital’ of the State, and six in the rural area. Out of these 12, in 2014, the BJP had bagged 11 seats. But this time the tally has come down to 6 – four in the city and two in rural areas.

Nagpur West which happens to be stronghold of the BJP for last over two decades has returned the Congress candidate this time defeating the BJP contestant, two time MLA Sudhakar Deshmukh by a margin of 6367 votes. Here the NOTA votes accounted for 3717. This is more than the 1143 NOTA votes polled in 2014.

In Nagpur South-West from where chief minister Devendra Fadnavis contested and won by 49,344 votes the number of NOTA votes has increased to 3064 from 1017 polled in 2014. Nagpur East which returned BJP sitting MLA Krishna Khopde by a margin of 24,017 votes registered 3460 NOTA votes. In 2014 the NOTA votes in this constituency were 1051. 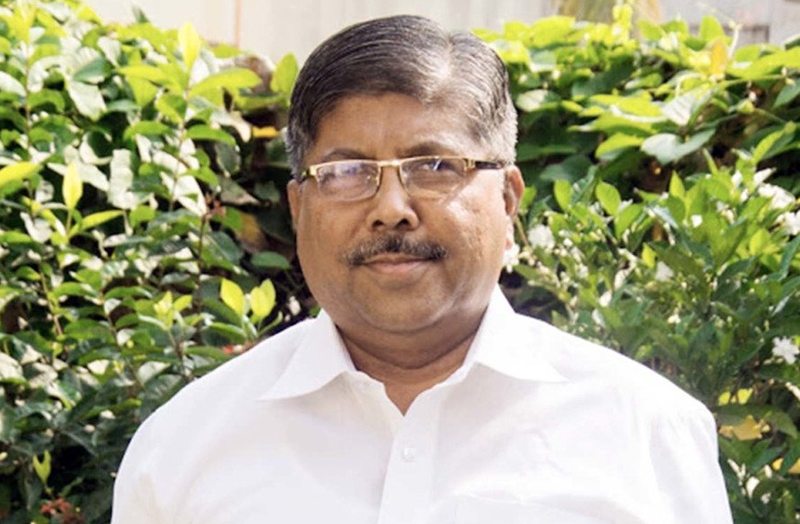 In Pune, the Kothrud constituency has attracted the attention of the pollsters and political pundits across the state as the BJP state president and state revenue minister Chandrakant Patil was ‘imposed’ by the party replacing the sitting BJP MLA Medha Kulkarni who enjoyed the support of majority of voters. This decision of the party had disturbed its traditional voters in that constituency. The anguished voters naturally preferred NOTA to register their protest. In Kothrud, though Patil won the NOTA votes accounted for 4028 –highest in Pune city as compared to 1583 polled in 2014.

The PUCL move: Arguments set in favour of NOTA are many. But the growing numbers of NOTA voters is alarming and each and every political party, especially the BJP must take a serious note of this phenomenon. It was the People’s Union for Civil Liberties (PUCL) that moved the Supreme Court for directing the Election Commission of India to include NOTA option. The Supreme Court accordingly gave the judgement directing the Election Commission to provide necessary provision in the ballot papers/EVMs and another button called “None of the Above” (NOTA) may be provided in EVMs so that the voters, who come to the polling booth and decide not to vote for any of the candidates in the fray, are able to exercise their right not to vote while maintaining their right of secrecy."

The Supreme Court also observed that it is essential that people of high moral and ethical values are chosen as people's representatives for proper governance of the country, and NOTA button can compel political parties to nominate a sound candidate.

NOTA was first used in Chhattisgarh in 2009 election in the local government bodies. In 2013, the NOTA button was pressed by the voters in four states – Chhattisgarh, Mizoram, Rajasthan and Madhya Pradesh and Delhi NCR assembly elections. Since then the NOTA votes are silently on the increase, securing more votes than the victory margins. This was evident in the assembly elections of Gujarat (2017), Karnataka, MP, and Rajasthan (2018) and now Maharashtra and Haryana (2019) where the voters have expressed their dislike for the fielded candidates.

The PUCL that moved the SC for inclusion of NOTA is a known leftist organization whose aim is to destabilize the internal peace and harmony in the country. People like Dr Binayak Sen, a known urban Maoist and self-styled human rights champion are members of this organization. The inclusion of NOTA happened during the UPA II rule.

The RSS has often appealed to the voters to vote to the ‘available best’ candidates and refrain from using NOTA because that tantamount to almost not exercising the constitutional right. But in spite of that appeal, the NOTA votes have increased. Majority of NOTA voters are actually the supporters or committed voters of the BJP. That is why, increasing number of NOTA votes is a serious phenomenon and the nationalist forces must take cognizance of it and immediately think of corrective measures to nullify its impact.