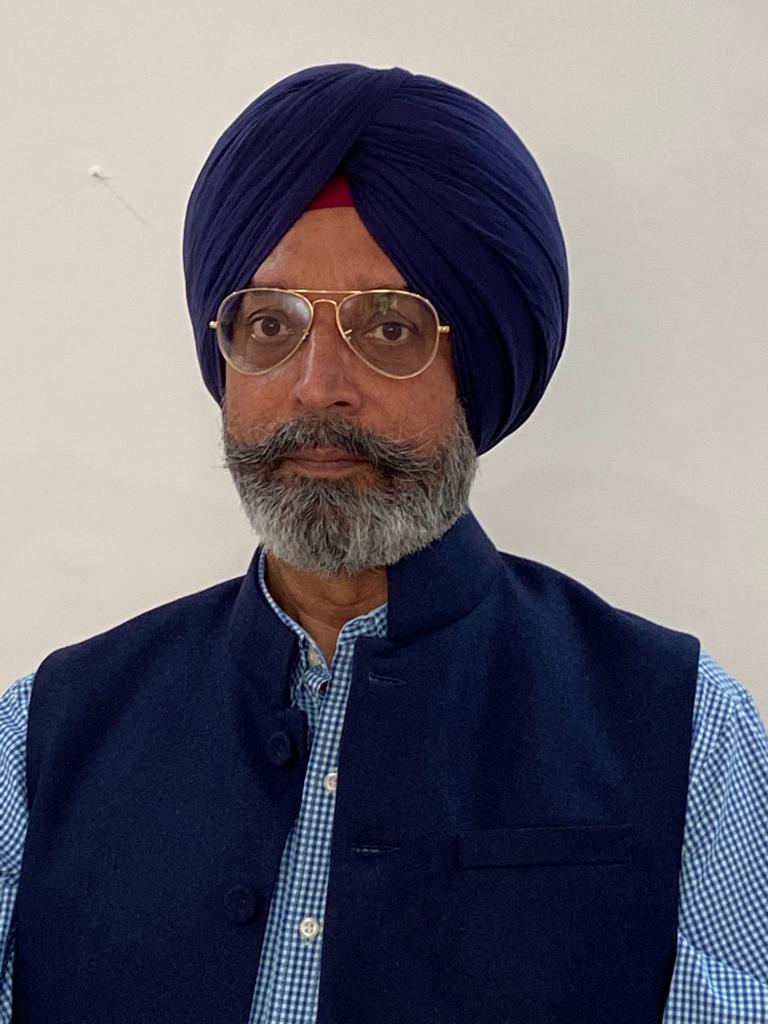 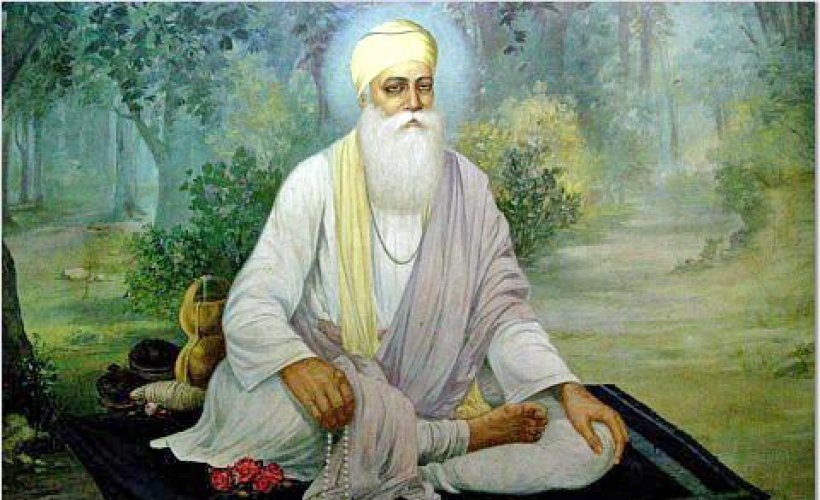 This widely used exposition elucidates the journey of Guru Nanak Dev Ji in this world 550 years ago. His teachings, as expounded by the Sikh religion, have as much (if not more) relevance in today’s world’s as they had when he first espoused them to bring about a socio-religious change in a society tearing apart due to dogmatism and inherent contradictions.

The Guru was born in an affluent Hindu family on 29 November 1469 at Rāi Bhoi Kī Talvaṇḍī (present day Nankana Sahib in Pakistan Punjab). His father Kalyan Chand Das Bedi aka Mehta Kalu was an affluent businessman of the area who had good relations with the local Muslim chieftain Rai Bhular Bhatti. His mother was Mata Tripta. Nanak had only one sibling, a sister named Nanki who was five years elder to him. She was the one person with whom he was particularly attached.

The life and times of Guru Nanki are not formally recorded. Whatever is available is in the form of parables called Janamsakhis (life stories) told by those like his companion Bhai Bala who were close to him and who are said to have accompanied him in his various Udasis (journeys). Many of the events related as Janamsakhis have been corroborated with his Bani (holy verses) which are recorded in the Guru Granth Sahib.

In accordance with these Janamsakhis Nanak, as a child, remained immersed in his own thoughts and this behaviour caused considerable tension to his father, Mehta Kalu, who quite naturally, wanted his only son to grow up the normal and take over his thriving business. He, however, exhibited a rare intellect and insight into a religious philosophy that looked at a single supreme God (monotheist). He rejected certain teachings and rituals of both Hindus and Muslims.

In order to maintain a modicum of harmony between father and son Bebe Nanki, on getting married, took her brother with her to her husband’s house in Sultanpur Lodhi and it is here that Nanak spent his growing years. He worked as a manger in the provision store of the local chieftain, Nawab Daulat Khan Lodhi. While performing his duties well, he spent his spare time in meditation and the company of ascetics. He also started building a Sangat (following) there.

Bebe Nanki though that getting her brother married would improve things and accordingly on 24 September 1487, at the age of about 18 years, Nanak was married to a girl called Sulakhani, daughter of Mul Chand and Chando Rani, residents of Batala, Punjab. The wife of Guru Nanak is now called Mata Sulakhani. Nanak did go through a family life and had two sons named Sri Chand and Lakhmi Das, however, his inner core remained attracted to spirituality.

It is said that one day he went for his early morning bath in the nearby river and did not return for three days. When people had given him up as drowned he re-emerged and recited a divine message that is recorded in the Sikh religion as the “Mool Mantra.”

Timeless, undying; formless, beyond birth, self created self existent

He then declared his life mission as one dedicated to the service of God and started his divine journey by advocating “Na Koi Hindu Na Musalman” (There is no Hindu, no Musalman) Thus, he set out his spiritual mission of considering mankind without shackles of caste and creed and religion, dedicated to the love of a single and supreme entity.

Guru Nanak Dev Ji went out on four long journeys across distant lands which are termed as Udasis. Even though there are no authenticated accounts of these spiritual journeys, their context becomes clear from the Bani that he quoted during his interaction with various peoples. It is believed that the four corners of his travels stand at Mount Sumer (Mount Kailash) where he held his most significant discussion with the ascetic Baba Gorakhnath and his 84 Siddhas; then onto to Assam in the East, Mecca-Medina in the West and Sri Lanka in the South. In the context of modern India, his signature in the form of some historical monument of fables are to be found in Himachal Pradesh, Jammu and Kashmir, Uttar Pradesh, Sikkim, Ladakh and even Nepal and Tibet and of course in the Punjab. What is significant is the Gurdwara Pathar Sahib in Ladakh; the imprint of his sandals in Nepal and reference to “Nanak Lama” in Bhutan.

He wandered across many places in those days of limited transportation, possibly on foot with his fateful companions Bhai Bala and Bhai Mardana. In every place he was known to sit outside the city, accept invitations from followers and confer with the poorest of the poor and Kings alike. Guru Nanak Dev Ji, thus, delivered his message of the entire mankind being one under the spiritual umbrella of a single creator - “Manas Ki Jaat Sabhe Ekay Pehechani Bo” (Human Beings should be recognised as one) far and wide. He never took any pretension of divinity, instead, he looked upon himself as the most humble servant of the supreme being whose definition he had given in his divine inspiration of the Mool Mantra. He advocated the concept of meditation and praise of the creator while staying connected with the world, unlike the meditative seclusion followed by Siddhas and Sadhus.

It is through the debates during his Udasis that his Bani crystalised into a spiritual message that was later recorded in the Guru Granth Sahib by subsequent Gurus and his devout Sikh disciples. The recording is in the form of nearly 1000 hymns set in superb poetry capable of being rendered by divine classical music. His essential message was “Kirat Kar, Wand Chak, Naam Jap” (Work with honesty, share what you have and take the name of the creator).

Twenty years after crisscrossing the land Baba Nanak finally decided to settle in one place and spread his message. For this purpose he chose a piece of land astride the River Ravi that had been donated to him by Dhuni Chand, an important Governor in Punjab. He named this as Kartarpur (place of God). The Guru took to the practice farming and was soon joined by his wife and other family members. Thus, Kartarpur became the first commune of the Sikh religion.

Within his community Guru Nanak Dev Ji initiated the concept of Sangat and Pangat. Sangat means congregation of people and Pangat implies sitting in rows and eating Langar (community food) together. The mornings and evening were spent in the recitation of Gurbani (holy verses), Kirtan (spiritual Hymns) and finally partaking food together in the Langar.

Thus Guru Nanak Dev Ji initiated a concept of universal brotherhood in singing praise of a single God while also remaining involved with normal family and worldly affairs. He gave impetus to this concept for 18 years at Kartarpur and laid a strong foundation for what evolved as a separate and dynamic religion. His thoughts were further crystalised by his successor Gurus who are considered to be in the same essence as the first master and are often referred to as Nanaks.

The religion, which attracted a lot of people from different walks of life, communities and religions, came at a time when there were a lot of divisions in society and people were suffering under a repressive religion driven regime. They first found solace in the religion and later used it as their strength to rid themselves of the repression.

Guru Nanak Dev Ji appointed his devout follower Bhai Lehna as his successor and gave him the name Angad, denoting that he was a part of the Guru himself. Guru Nanak left is physical form on 22 September 1539 in Kartarpur, at the age of 70.