Clicking a 3D image, Chandryaan 2 captures stunning view of one of Moon’s crater

Bengaluru, November 13: Although the Vikram Lander had a rough landing at the lunar surface, there’s no setback for ISRO’s Chandrayaan 2. In a latest, Chandrayaan-2 is imaging some never seen before pictures of the lunar surface and gathering vital information. The latest in the series is a 3D image of one of the Moon’s craters. The crater, located near Lindbergh, has -6.07 latitude and 53.40 longitude. 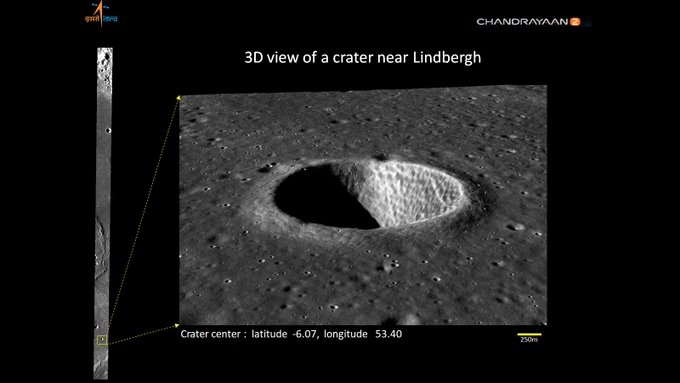 Apparently, Chandrayaan 2’s Terrain Mapping Camera-2 or TMC-2 clicked this image at 5m spatial resolution and stereo triplets which are fore, nadir and aft views. TMC-2 did this to prepare Digital Elevation model or DEM of the entire surface of the Moon. TMC-2 captured this stunning picture from an altitude of 100KM above the lunar surface. Images from TMC-2 were processed by ISRO into Digital Elevation Models. This enabled mapping of lunar surface’s land-form morphologies and revealed craters which are formed by impactors, lava tubes which can act as potential sites for future habitability for humans, rilles which are essentially furrows made by lava channels or collapse of lava tubes.

Earlier this month, ISRO chief K Sivan said that they will again attempt soft landing in space in the near future and that Chandrayaan-2 mission is not the end of story for them. Sivan said that ISRO is planning to launch a large number of advance satellite in the coming months. Sivan added that ISRO could not finish soft landing on Moon’s surface but Vikarm lander’s all the systems functioned well until 300m from the lunar surface. The data that was available to set things right is very valuable. He assured that ISRO will pull all its experience, technical prowess and knowledge to set things right and will demonstrate soft landing again in near future.