Vivekananda cannot be desecrated by Marxism

Some people still hold that “power” comes only from the barrel of the gun. But the power in spurts also comes from the pens. The power coming from the pen is mightier and more impactful. That’s why we have the works from the pens of great thinkers like Hegel, Friedrich Engels and Karl Max which easily “demolished” the monopoly of feudalism, aristocracy, monarchy and churchism that no weapons on earth could have done.

Probably about 100 countries had determinedly opted for communism till the first half of the 20th Century. The leaders were euphoric that they would bring “equality”among all, they would fill the stomach of each individual. The ordinary citizens will have no worries. The news of new-found joy and peace among the commoners in Russia veritably spread world-wide. But very soon, standing on the elevated pedestal of power, the torchbearers of Communism projected themselves to be “more equal”. Thus, in spite of major changes in the socio-economic fabric, the Marx-Lenin doctrines also came to wreak havoc with the lives of the people who at times raised their voices against the brutal atrocities in the name of achieving equality. Millions of people were killed. Consequently, that endless violence and bloodshed have further bloodied the pages of history. The second half of the twentieth century thus saw the fall of communism like a ton of bricks. 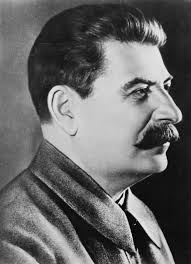 This rapid transition was in fact prompted by various factors. The loss of the “integrity” of the leaders was the prime cause. On seeing the rise of power of the leaders who acted with unusual arrogance, George Orwell could not hold himself back. He roared – ‘communism to totalitarianism is terribly frightful’. Orwell penned down a satirical novel – ANIMAL FIRM. This touched everyone’s heart. It was a lethal attack upon self-righteous Joseph Stalin of the Soviet Union.

True, the wayward and whimsical misinterpretation coupled with the loss of human values turned out to be Frankenstein’s monster to kill this well-intended ideology of classless government. Within a period of less than 50 years, only a few nations stood up to continue to follow the pathway conceived by Karl Marx and his masters. Many rational political scientists had set forth diverse reasons for the chronic sickness of the communism.

Yet, the literature by Marx and his ilk still continue to cast its spell. In some countries, it roars and thunders with a vengeance. This results in barbaric riots and violence disturbing the peaceful co-existence of the diverse communities. 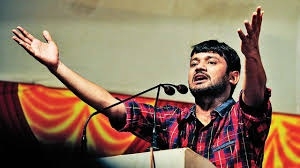 As other countries, India has also long been suffering the onslaught of such ideologues and their proclivities. Therefore, we regularly witness the “cruel avatar” of Marx-and-Mao. Just recently, the statue of Swami Vivekananda was mindlessly defaced by a group of students in JNU, Delhi. If you ask earnestly what they have found wrong in the Indian monk then their answers come with the tone of immaturity, dogmatism and hatred. JNU has earned a reputation of being infested with a swarm of certain kind of crackpots whose eyes can’t bear to look at that which glorify the nation. Their minds are weighed down by the heavy load of prejudices and hatred for the nation, nay, humanity. They are almost like spoilt brats kicking their parents and smashing their own household furniture. "Tukre-tukre" gang is a new term to describe them for their open subversive activities. 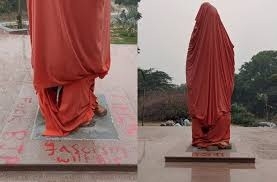 What is very appalling is that round-the-clock they are motivated and protected by certain forces. Those forces also held the Indian academia to ransom for the past over a hundred years. Therefore, many wrongs are taught in Indian schools as right. The TRUTHS are resisted to be included in the academic curriculum. The pride and glories history of the country and its rich literary KNOWLEDGE has been systematically buried. Yes, they are the kind of intellectuals who see “virtues” in Mahishasurandforeign despotic invaders like Mohd.

Gajni,Babar, Aurangzeb but vehemently criticize Indian icons who are invariably the paragon of righteousness. Right from the embodiment of righteousness like Krishna, Rama, Ved Vyasa, Shankaracharya to the present social and literary figures who have contributed remarkably in the making of INDIA, are the objects of regression and derision for those scholars who hold Karl Marx, Hegel, Lenin…., andin high esteem. Therefore, when the statue of Vivekananda was desecrated, we noticed conspicuous "silence" while the groups of intellectuals rocked the country when the statue of Lenin of Russian was pulled down in Tripura, India. 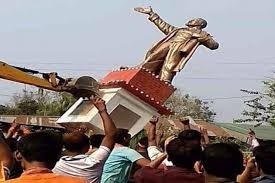 Rightly speaking, Swami Vivekananda was a thinker and free from worldly affairs. He is known to have realized the divinity in every being. He is also known to have preached across the world that we must learn to see every individual as God manifestation in flesh and blood. Is it not the universal wisdom of humanity? Is loving each being without discrimination not the first teaching of right-thinking philosophers and all religions? Even Karl Marx and Hegel will not disagree on this. But it is very disgraceful that such great men with great ideas from the home country are brazenlydisrespected and demeaned. It seems it is time for serious introspection and to take the right measures before it is too late.