Assuring CM Sonowal, PM Modi asserts "Will keep interest of Assam in consideration while signing accord with Naga rebel group"

New Delhi, November 8: Taking into consideration the situation prevailing in Nagaland in accordance to the insurgent groups, Prime Minister Narendra Modi and Union Minister Amit Shah on Thursday assured Chief Minister Sarbananda Sonowal that the Centre will take into consideration Assam and its people while signing any accord with the Naga rebel groups. The Centre gave the assurance when CM Sonowal called on them separately. 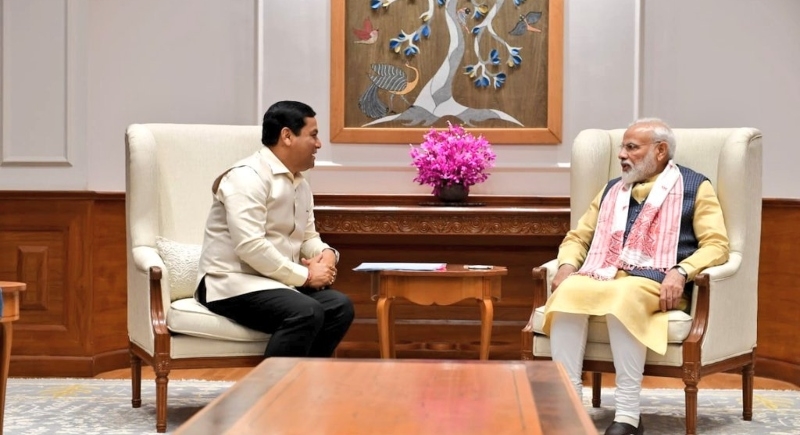 During the meeting, Assam CM Sonowal apprised the Prime Minister of the prevailing mood of the people in Assam in the wake of the proposed Naga peace accord and discussed with him a number of other issues concerning the state. PM Modi assured CM Sonowal that the Centre would keep in mind the interests and aspirations of the people of Assam before taking any decision.

The Centre on October 31 had said it is yet to conclude talks with Naga insurgent groups and will consult all stakeholders, including the states of Assam, Manipur and Arunachal Pradesh, before finalisation of any settlement. During a "lengthy discussion" with the home minister, the chief minister urged Shah to take into consideration the interests of the people of Assam while going for any accord.

On the other hand, Amit Shah has assured Sonowal that nothing would be done that goes against the interests of the state and its people, the release said. The Union home ministry had said it has come to the government's notice that lot of rumours and misinformation is being spread in the media and social media that the final Naga settlement has been arrived at and will be announced soon.

In a release, it stated, “This is creating anxiety and concern in some parts of the country. It is clarified that before any settlement is arrived at with Naga groups, all stakeholders including states of Assam, Manipur and Arunachal Pradesh will be duly consulted and their concerns will be taken into consideration. No credence needs to be given to such rumours and incorrect information”.

The central government has already rejected the NSCN-IM's demand for unification of Naga inhabited areas -- located in Manipur, Arunachal Pradesh and Assam. The three north-eastern states have also vehemently opposed it.