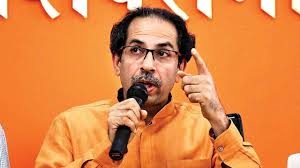 Be that as it may, the split of pre-poll BJP-Shiv Sena Alliance was inevitable and foregone conclusion. Each side is blaming the other side for the “Great Betrayal” after nearly 35-years of opportunistic alliance despite Shiv Senas blackmailing tactics to embarrass the BJP from time to time.

None should blame BJP arch political rivals - Sharad Pawar’s NCP and the Congress Party – to exploit the opportunity beckoning them to enter into post-poll alliance with the Shiv Sena and conceding the Chief Ministers slot to Aditya Thackeray and also agreeing to give 50 percent cabinet berths to Shiv Sena.

In retrospect, the ongoing political farce exposes the bitter lesson of India’s history – Hindu Self destructive divide in pursuit of power. And, the real loser is “Hindu Unity.”

In reality, history offers many critical lessons – a prism through which one can gain a look into future prospects.

Ipso facto, politics is in pursuit for power. Never a game for the week-kneed and never a field for ethics, morals and values! Today, it is power, status and self aggrandizement by hook or crook. Sans power, political leaders are like ‘fish out of water’.

All political parties and their leaders are playing vicious games in which none can claim “Holier than thou” status. Some are more brazen and ruthless; whilst others may be only a shade behind – shades of black only.

By exception only among the leaders, one may find someone dressed in pure while riding a white horse and shining like a ruler in service of the people, society and the nation.

Ab initio, lack of ideological convergence was real between the BJP and the Shiv Sena. In retrospect, it was purely opportunistic alliance doomed to fall apart. Of course, the pre-poll relationship was purely for mutually beneficial relationships advantageous to both sides at the polls.

So, the fault lies primarily with BJP leadership for not learning from the lessons of Shiv Sena’s past history.

Of course, lack of ideological convergence between the Shiv Sena and the NCP and the Congress Party is also real except for sole pursuit of power by hook or crook with utter disregard to people’s mandate.

Viewed in such a vicious political environment, a peep into the build-up of Shiv Sena to its current status is considered vital to appreciate its past history to present its no-holds barred shifting postures and its future outcomes.

Uddhav Thackeray inherited the stewardship of Shiv Sena from his father Bal Keshav (Balasaheb) Thackeray, a professional cartoonist turned editor of political weekly – Marmik – who founded the Shiv Sena in 1966 - a right-wing pro-Marathi party active mainly in Mumbai the state capital of Maharashtra.

Shiv Sena’s main plank was against the growing influence of non-Marathis particularly South Indians, which was in its 1966 party manifesto. Politically, the Shiv Sena was anti-communist and wrested control of trade unions in Bombay from the Communist Party of India (CPI).

Following loss in the local elections in 1970, the Shiv Sena started violent tactics with attacks against rival parties, migrants and the media; the party agitated by destroying public and private property.

Most important, Thackeray publicly supported Indira Gandhi during the 1975 Emergency to avoid getting arrested. Thackeray supported the Congress party numerous times. Thackeray was criticized for his praise of Adolf Hitler which he later neither admitted nor denied: "I am a great admirer of Hitler, and I am not ashamed to say so!”

In 1989, the Sena's newspaper Saamna was launched by Thackeray.

Because of his dictatorial style of functioning and rigid ideological postures, quite a few of his confidents left his fold in the past. In 1976, Dr. Hemchandra Gupte, Mayor of Bombay and confidante, left Shiv Sena citing importance given to money, violence committed by the Shiv Sena members and support for Mrs. Gandhi and the 1975 emergency.

In 1991, his close aide Chhagan Bhujbal left the party for Thackeray’s firm opposition to caste based reservation who had stated: "There are only two castes in the world, the rich are rich and the poor is poor, make the poor rich but don't make the rich poor".

In 2006, Raj Thackeray, his nephew, broke away from Shiv Sena to form the Maharashtra Navnirman Sena (MNS) with appointment of his son, Uddhav. Narayan Rane also quit around that time.

Also, on 27 March 2008, in protest to Thackeray's editorial, leaders of Shiv Sena headed by Goyal in Delhi resigned, citing its "outrageous conduct" towards non-Marathis in Maharashtra stating "Shiv Sena is no different from Khalistan and Jammu and Kashmir militant groups which are trying to create a rift between people along regional lines. The main aim of these forces is to split our country.”

Following the 1992 Bombay riots, Balasaheb Thackeray adopted anti-Muslim posture based on Hindutva. In a 1993 interview, Thackeray stated, "There is nothing wrong" if "Muslims are treated as Jews were in Nazi Germany." Shiv Sena allied itself with the Bharatiya Janata Party (BJP).

When explaining his views on Hindutva, Balasaheb Thackeray linked Islam with violence and called on Hindus to "fight terrorism and fight Islam." In an interview with Suketu Mehta, he called for the mass expulsion of illegal Bangladeshi Muslim migrants from India. He told India Today "Muslims are spreading like a cancer and should be operated on like a cancer.” Again in 2008 he wrote: "Islamic terrorism is growing and Hindu terrorism is the only way to counter it. We need suicide bomb squads to protect India and Hindus." He also reiterated a desire for Hindus to unite across linguistic barriers to see "a Hindustan for Hindus" and to "bring Islam in this country down to its knees." In 2007, he referred to Muslims as "green poison" during a Shiv Sena rally.

Nonetheless, the BJP-Shiv Sena alliance won the 1995 Maharashtra State Assembly elections and was in power from 1995 to 1999. Thackeray declared himself to be the "remote control" chief minister.

However, for indulging in corrupt practice by seeking votes in the name of religion, on 28 July 1999 Thackeray was banned from voting and contesting in any election for six years from 11 December 1999 till 10 December 2005.

Balasaheb Thackeray record of crimes is available in public domain. He was arrested multiple times and spent a brief stint in prison. In 2000, he was arrested for his role in the riots. In 2002, Balasaheb Thackeray issued a call to form Hindu suicide bomber squads. In response, the Maharashtra government registered a case against him for inciting enmity between different groups. Eight or nine cases against Thackeray and Saamna for inflammatory writings were not investigated by the government.

In sum, the track record of Balasaheb Thackeray’s Shiv Sena inherited by his son, Uddhav Thackeray, does not reflect a clean image of a responsible party in pursuit of maintaining harmony and peace and providing corrupt free good governance.

Ideologically, the party can be labelled as yet another regional political outfit (sons of soil concept) that jumped onto the Hindutva bandwagon to maximize its political base. Also, it is yet another dynast fiefdom that believes in violence and extortion and dictatorial style of functioning. Most important, it too believes in breaking and shifting alliances to somehow grab power.

Uddhav Thackeray is no different from his father. Having suffered from “heart problem”, he has projected his son Aditya Thackeray as the heir of Balasaheb Thackeray lineage.

During the latest press conference, Uddhav Thackeray has made a scathing ‘no-holds barred’ attack on the BJP to include failure to uphold the pre poll 50:50 rotational Chief Minister post, poaching/horse trading of its MLAs, no trust in Amit Shah, no point to talk to a party that lies among other allegations like poaching/horse trading.

Only the official announcement of break-up of the alliance is awaited from both the Shiv Sena and the BJP. It must be accompanied by the resignation of Arvind Sawant of Shiv Sena, Minister of Heavy Industries and Public Enterprises.

In reality, Sanjay Raut, Rajya Sabha MP, has met Sharad Pawar, NCP, and held discussions and also claimed that Shiv Sena has the numbers to form the government without the BJP. As per the latest media reports, the Congress party has extended its support to Shiv Sena to keep the BJP out of power.

Viewed in the bizarre and highly acrimonious verbal spats in the media, the future prospects of political stability is quite bleak. People of Maharashtra are squarely responsible for the current political crisis for they failed to give a decisive mandate in favor one party.