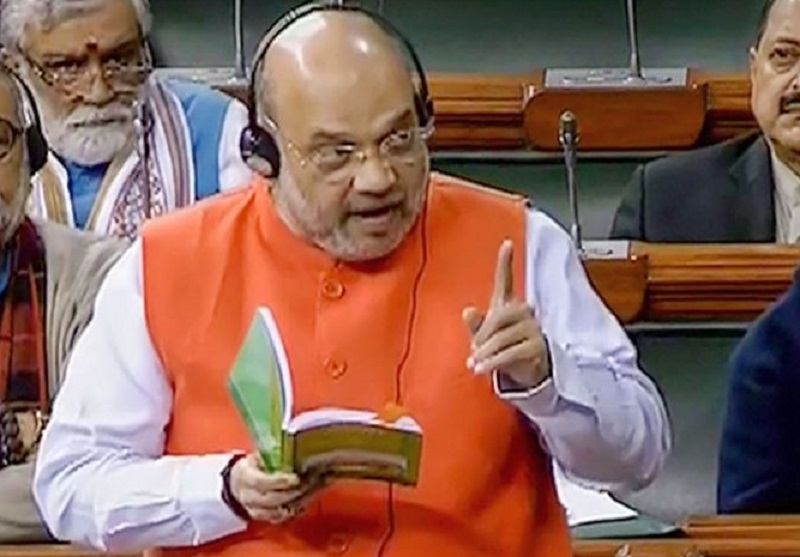 Politics over demographic transitions are long term threats to national security interests. Not so easy for laymen to dissect different viewpoints of those, who pretend to be know-all and end-all of wisdom and sagacity, indulging in vicious acrimony and cacophony?

Courtesy Internet, social media, and the partisanship of some mainstream news outlets, there is absolutely no clarity over the key issues from national security point of view.

From common sense point of view, CAB needs to be reviewed merely from politics point of view but also from economics and social, besides geopolitics prospects, points of view from midterm and long term contexts.

Paramount is the responsibility and accountability of elected representatives to guarantee “Human Security” of its not only present generation but also future generations at all costs by checks and balances. It is only possible if the current demographic equilibrium is maintained at all costs and the ongoing natural growth rates are reduced to 0.7% by 2030 or even earlier.

Population overstretch due to demographic transitions continue beyond the load bearing capacity of poor “Bharatamata” what with rapid depletion (even extinction) of almost all natural resources, the future appears quite horrendous for future generations. Food and water security challenges are bound to escalate beyond the capabilities of present crop of egocentric, self-centric and megalomaniac crop of elected representatives.

Viewed in the above likely futuristic scenario, it is vital to review the contentious Citizenship (Amendment) Bill (CAB) that seeks to grant citizenship to non-Muslim refugees from Pakistan, Bangladesh and Afghanistan, if they faced religious persecution.

Salient features of the new bill include granting exemption to a large part of the North East region from applicability of the proposed law (effectively entire N-E including Manipur), definition of who is an illegal immigrant, and a cut-off date for entry into India to 31 December, 2014. It also has specific clause related to Overseas Citizens of India (OCI).

Political confrontation is highly divisive with least scope for reconciliation vital for forging consensus. For the Opposition and critics of the government charge that the bill is fundamentally flawed because it is "communal" and "unconstitutional". Rahul Gandhi and Mayawati have spoken out against its discriminatory nature, but neither the Congress nor the Bahujan Samaj Party has the strength in either House of Parliament to make a difference.

Strongly opposing the bill, Manish Tewari stated in the Parliament: "This is against Article 14, 15, 21, 25, and 26 of the Indian Constitution. This bill is unconstitutional and against basic right of equality. This bill is also a violation of the basic structure of the Constitution as established in the Keshvananda Bharati case.”

Shashi Tharoor alleged that CAB is against the foundational values of the Constitution and “assault on the very soul of India". The BJP is singling out "one community" by refusing to grant its members asylum from oppression on the same conditions as other communities. He is confident that no bench of the Supreme Court will allow such a "blatant violation" of the fundamental tenets of India's Constitution to go unchecked.

Asaduddin Owaisi, AIMIM, has torn the Bill in the Parliament, which is on expected lines. After all, he has to demonstrate his aggressive and abrasive opposition for the sake of his consolidating his sway over Muslim vote banks. And, of course, he has only followed the precedent set by Rahul Gandhi in the past tearing the Bill of his own government.

Dayanidhi Maran, DMK, opposed the proposed CAB for its failure to address the Sri Lankan Tamil refugee issue highlighting the North’s least concern for the South interests. And, he also questioned the rationale of allowing Muslims of POK to gain Indian citizenship.

For the sake of vote banks, the Congress Party supported by its allies, all pseudo secularists, are in favor of offering shelter and even citizenship to persecuted minorities from neighboring countries, but not to specify of their religious affiliations.

Politics based on Constitutional propriety and validity apart, the key issue that must concern all alike is that demographic transitions dramatically shape and change geopolitics and may have adverse national security consequences particularly from economy and social dimensions.

Most important, hardly there is concern expressed about various facets of economic security in posterity during the debate over CAB. In 1798, Robert Malthus had argued that “left unchecked, population will outgrow resources”. Today, the “gloom and doom” prospect of the Malthusian theory of population engulfing India is real. After all, India is at the cross roads what with rapid decline in availability of natural resources. The spiralling ‘Onion Prices” is the harbinger of likely doom that may engulf India, particularly in the face of rapidly declining availability of natural resources including water and clean air. Rapid population growth has already intensified competition for resources and jobs.

Crises and conflicts proliferation will be inevitable due to animosity between different religious and/or ethnic groups for rapidly depleting resources that may ignite full internal security conflagrations.

Stating the obvious, modern India was created following partition on communal lines. So, there is no justification whatsoever to allow Muslims majorities from the lands of neighboring nations to seek refuge in India by illegal and foul means and to claim citizenship. As it stands, Bangladesh Muslim labor is already in large numbers working in real estate and among other areas for their cheap costs. As per latest media report in circulation, even a Pakistani with his family has been working in Kurnool District of Andhra Pradesh for the past 15-years and was caught in Hyderabad during his return to Pakistan. What about illegal Myanmar Rohingya refugee’s influx?

Viewed from the past and the present, the future holds very disturbing and depressing prospects considering the vicious internal politics at play. Let me review the basic data in public domain available of population trends in Afghanistan, Pakistan and Bangladesh. In 1992 in Afghanistan, the Hindu and Sikh population was 7.7 lakhs. As per the latest data, there are only 1000 to 1500 Hindus and Sikhs living in Afghanistan.

Next, in the present Pakistan in 1998 the Hindu and Sikh population was 21 lakhs. According to the 2017 census official results, the population of Pakistan was 20.8 crores, but Hindus were roughly 31 lakhs only what with percentage remaining nearly constant around 1.5%. Today, ethnic cleansing in Pakistan is a frightening prospect faced by the Hindus, Sikhs, Christians, Jains, Buddhists and even Parsis.

According to the Human Rights Commission of Pakistan data, just around 1,000 Hindu families fled to India in 2013. In 2014, a member of the ruling Pakistan Muslim League-Nawaz (PML-N), Dr Ramesh Kumar Vankwani, revealed in the National Assembly of Pakistan that around 5,000 Hindus are migrating from Pakistan to India every year. Those Pakistani Hindus who have migrated to India allege that Hindu girls are harassed in Pakistani schools and their religious practices are mocked. Many Hindus voluntarily convert to Islam for easily getting Watan Cards and National Identification Cards. Conversions are also carried out by Deen Mohammad Shaikh Mission who converted 108,000 people to Islam since 1989.

Around 20,000 Sikhs remain in Pakistan today, mostly in the restive northwest, which has been rocked by an Islamist insurgency for more than a decade, forcing many to leave their homes in the tribal areas on the Afghan border for the city of Peshawar.

As per 2011 Bangladesh census, Muslims constitute over 90% of the population, while Hindus constitute 8.5% and the rest constitute 1%. The 1951 census in India recorded that 25 lakh refugees arrived from East Pakistan, of which 21 lakhs migrated to West Bengal while the rest migrated to Assam, Tripura and other states. These refugees arrived in waves and did not come solely at partition. By 1973 their number reached over 60 lakh. As per Dhaka Tribune report that from 1964 to 2013, around 113 lakhs or 1.13 crore Hindus left Bangladesh due to religious persecution and discrimination. It means on an average 632 Hindus left the country each day and 230,612 annually.

There are approximately 100,000 people adhering to the religion of Sikhism in Bangladesh besides a tiny Buddhist and Brahmos Samaj community.

According to a study by Pew Research Organization, Hindus will constitute 7% of the population of Bangladesh by 2050, while Muslims will form 92% of the population. The Hindu refugee exodus in 1971 is recorded by independent sources. An article in Time magazine dated 2 August 1971 stated "The Hindus, who account for three-fourths of the refugees and a majority of the dead, have borne the brunt of the Muslim military hatred. Senator Edward Kennedy wrote in a report that was part of United States Senate Committee on Foreign Relations testimony dated 1 November 1971, "Hardest hit have been members of the Hindu community who have been robbed of their lands and shops, systematically slaughtered, and in some places, painted with yellow patches marked "H". Given that the Hindu population in East Pakistan was around 11 million in 1971, this suggests that up to 8 million, or more than 70% of the Hindu population had fled the country.

To sum up, the heat generated in the Parliament given partisan theatrical twists and turns in the media, fail to address the key issues concerning long term national security interests. All other high-fly archaic “Humanitarian, Constitutional and Spiritual” considerations may have been good in the past, but no longer relevant in the emerging highly acrimonious and divisive context and content.

Accept all alike that checks must be immediately ensured to keep India’s population around 150 crores by 2050 and the CAB is one of the means to achieve such an end. Most important, maintaining the existing demographic equilibrium is vital imperative to contain internal national security threat challenges that lay ahead in economics, social and environmental spectrum.