Srinagar, December 2: Dedicating their life for the nation and safeguarding their motherland, the terms ‘bravery’, ‘courage’ is rightly exhibited for the soldiers. Showing immense enthusiasm, the Jammu and Kashmir Police informed that the recruitment drive conducted by them has evoked tremendous response from locals. Almost 77,641 youth applied for 5,199 posts, even once militancy-infested districts of south Kashmir showing equal fervour. 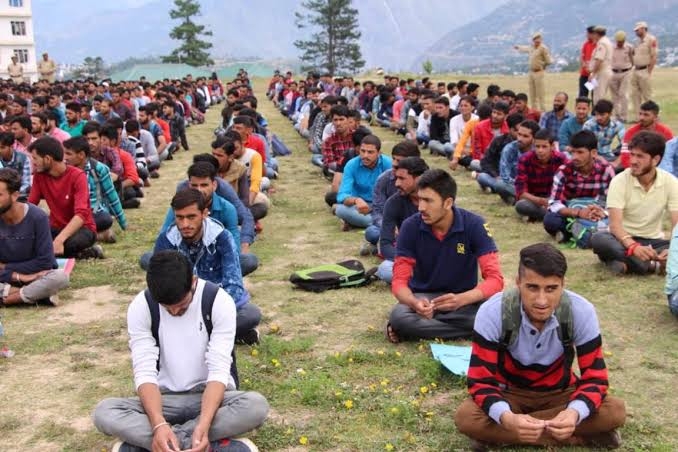 The Jammu and Kashmir Police spokesperson said, “The recruitment offer has evoked tremendous response from the aspiring youth across the Union Territory. Around 77,641 youth applied for these posts. The physical tests for these posts have been conducted across the valley and the final process of recruitment is in progress.”

Despite the hectic schedule in handling the law and order, it’s conducting recruitment for 5,199 posts of Special Police Officers (SPOs). In the Kashmir zone, according to the police, 26,594 youths applied for the recruitment drive. Anantnag, which witnessed heightened militancy in the past few years, saw 2,859 applications for 409 posts and Kulgam 989 for 259 posts. “The number of vacant posts was 575 in Pulwama, Shopian and Awantipora districts for which 1,469 youth had applied,” the police said.

In the Central Kashmir range including Srinagar, Budgam and Ganderbal districts, which also saw militant recruitment in the past two years, 6,013 applications for 813 posts were received. “Kupwara alone saw 5,118 youth applying for the 187 posts and Baramulla, Sopore, Handwara and Bandipora saw 10,146 applying for 686 posts,” said the police. In the Chenab Valley’s Doda-Kishtwar-Ramban range, 11,909 applications were received for 298 posts.

The Centre in September enhanced the monthly honorarium of over 30,000 SPOs between ₹6,000 and ₹18,000, depending on the period of service. Besides, the police said it had sanctioned ₹7 crore in favour of 1,100 personnel this year. Dilbag Singh, DGP, on Saturday announced ₹63 lakh in favour of 85 police personnel.