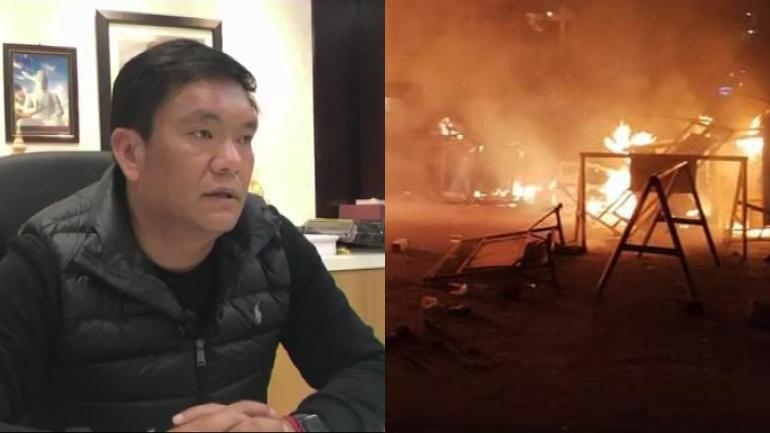 First it was the NRC or the National Register of Citizens issue that threw Assam in the cobweb of largescale protests and violence some months ago. The ambers of that conflict have not yet completely doused and the issue still remains simmering in the state.

It all began with the largescale influx in Assam systematically planned and encouraged initially by the Muslim leaders with an ulterior design to merge Assam into their proposed idea of Pakistan. This legacy was continued in post-independent India by the Congress party that looked at these infiltrators, most of whom were Muslims, as their wholesale vote bank. But when the people started feeling the pinch of growing population pressure on their land and the accompanying criminal incidents that shattered the psyche of an average peaceful Assamese, there was a massive agitation that continued for six years culminating in what is known as Assam Accord.

This Assam Accord has envisaged among other things preparation of a National Regiser of Citizens (NRC) taking 1951 as base year to identify the genuine Indian citizens and the infiltrators. When work on this NRC began, there erupted the public unrest against it and the entire social life of the state underwent a massive social churning.

The issue had political fallout also. The BJP at the Centre is in favor of NRC and wanted genuinely to implement the measure so that it could help identify the illegally staying persons and drive them out of Assam. But the parties that thrived on the votebanks of these infiltrators opposed this step. However, more surprise came when thr Asom Gana Parishad (AGP) that fought the issue for six years and now allied with the BJP, has threatened to break the alliance and oppose the BJP. This is the irony of political measures.

The tribal communities that included in the PRC were Deoris, Sonowals, Kacharis, Morans, Mishings, Adivasis and Gorkhas who had settled in the Namsai and Changlang districts of Arunachal Pradesh.

This sparked strong reaction from the Arunachal Pradesh Scheduled Tribes (APST) resulting in violent demonstrations in Itanagar and elsewhere in the state. The situation escalated to the extent that called for police intervention and firing that claimed some lives.

Over the last three days, one protester died of a bullet wound after firing by security forces, houses of ministers have been attacked, public vehicles burnt, media personnel on duty threatened, and offices of powerful student organisations like All Arunachal Pradesh Students’ Union (AAPSU) set on fire.

Arunachal Pradesh is home to over 60 different tribal commiunities. The state borders China on the north, Myanmar in the east and Bhutan and Assam in west and the south. It is a sensitive area where China has been consistently claiming its authority. The state had borned the brunt of 1962 Indo-China war. But the people of Arunachal Pradesh are proud citizens of India.

There are some other tribal communities that are not considered as original inhabitantas of Arunachal Pradesh but have settled in that region since generations. They were deprived of certain educational and employment opportunities in absence of this permanent residentship. Hence the government had appointed a Joint High Power Committee (JHPC) to go into the issue and recommend the measures. It suggested to issuing the PRC to such tribal communities to tide over these difficulties and get an equal opportunity to study and earn.

Thus, the PRC is a document of a persons’s residence in a state, and is useful in availing reservations against quotas for state residents in educational institutes and quota-based jobs. Each state tends to have its own eligibility criteria. In Arunachal Pradesh, PRCs have mostly been issued to the state’s Scheduled Tribes (APSTs).

However, the situation has escalated to such an extent that the Chief Minister had to announce suspending the issuance of PRC “in the present situation” and not taking the matter in the current assembly session.

On Sunday, Arunachal Pradesh Chief Secretary Satya Pal issued a statement saying, “Considering the present situation in respect of the matter pertaining to grant of PRC to non-APST residents of Namsai and Changlang districts, the state government has decided that no further action shall be taken in respect of grant of PRC”.

This is not the only issue of its kind. In the North-east India, there are similar issues related to presence of Chakmas in Mizoram, Bru in Tripura, non-Maiteis in Manipur, Sikhs in Meghalaya, and Chakma abd Hajong in Arunachal Pradesh. Assam having large scale Muslim infiltrators and Hindu refugees from Bangladesh is the same story but with a massive dimension.

There is a pattern visible in all these cases where the ethnic identities are seen taking over in an emotional appeal and causing discord among the communities living in peaceful co-existence over the ages. The involvement of foreign powers eminical to India cannot be completely overruled in these incidents in view of the strategic location of these states.

The intelligence sources suspect the hand of China in these violent outbursts in Arunachal Pradesh and there are valid reasons to believe in this suspicion because of Chinese claims over Arunachal Pradesh. China refers to Arunachal Pradesh as “southern Tibet” and therefore, it is well in their scheme of things to create unrest and political discord and social disharmony in the border state by provoking the local tribal communities against the government in this PRC issue.

Unrest in Arunachal Pradesh is certainly not in the interest of India and could pose another threat to the national security. Diversion of attention by the Indian security apparatus is what China would be interesting in and therefore, the government must not neglect the unrest and find out a lasting solution to resolve these vexed issues of NRC and PRC. Sooner the better.