Myth of Winning over Hearts and Minds of Kashmiri Muslims 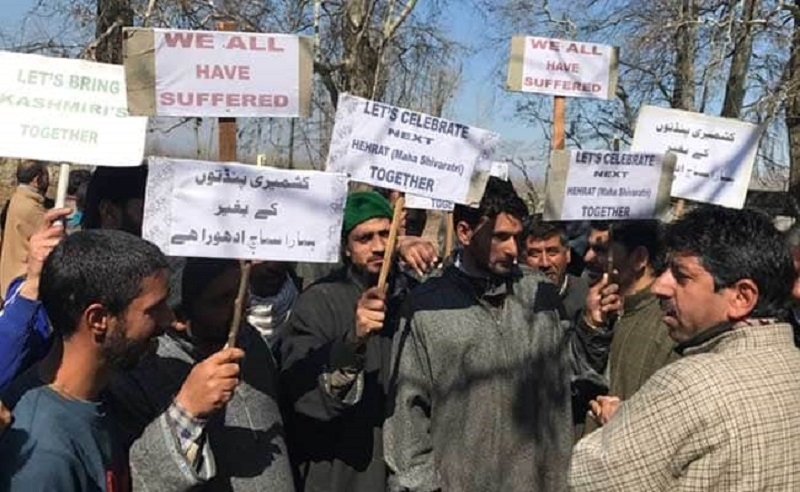 Those who nurture fond hopes of winning over hearts and minds (WHAM) of the Kashmiri Muslims in short term context, what with 70-year- long distrust and hatred fed and bred in Madrasas and in the more recent past on the social media, are living in fool’s paradise of their own making – a myth or illusion.

Revisit Bismarck’s quote: “Fools learn from their own experience; Wise learn from other’s experiences”. Undeniably, the national mainstream including political leaders and parties, bureaucrats, intellectuals, civil society activists and “We the People” have dismally failed in the past 70 years to win over the Kashmiri Muslims. If any, Kashmiri Muslims alienation has been cumulatively compounded.

Wake up Oh! Blindmen of Hindostan, particularly belonging to the cronies of the Congress Party Dynasty, de-radicalization of Kashmiri Muslims is a Himalayan Challenge.

None can deny the mood of the nation but also those in the Jammu and Ladakh regions, applauding the bold decision by Modi led NDA government.

Nonetheless all alike must realize that Pakistan through the ISI, proxies or snakes bred in their backyards will not relent but continue to conduct the most heinous 24x365 Hybrid war offensive with renewed vigor. Their propaganda machinery and indoctrination aided by funding across the borders will continue to induce and incite unemployed youth to either take to the gun or to engage security forces in stone-pelting duels whilst simultaneously stepping up LoC cross border fire exchanges.

Viewed in such a context, “WHAM” is a Himalayan Challenge to overcome. Whatever political initiatives may be attempted in a short term context cannot overnight regain the trust and confidence of radical groups. A generational shift or transformation of mindset needs to be induced by countering adversaries besides vested internal political leaders and parties within J & K and also country-wide.

Nation, particularly armed forces and other security forces, must be prepared to make more sacrifices with “both hands tied to the back” to counter highly provocative terror and stone pelting strikes. They must strive for most effective operational “synergy” against terrorists, separatists and their sympathizers and also those sitting on the “fence”.

“We the People” must also remember that Pakistan appreciates that India would race disproportionately way ahead of them in the “National Power” projection capabilities by 2025. For them, it is now or never or do or die situation.

Pakistan has made no bones of converting Kashmir into Palestine. And, they are bound to divert the “Taliban-JeM-LeT” elements currently operating in collusion in Afghanistan to Kashmir to “bleed India through 1000 cuts”. Add to them, the ISIS and Al Qaeda threat that may erupt!

Who will be the victims? People of Kashmir for the political and separatist leaders alike would hide behind security personnel at the cost of tax-payers or their handlers across the borders.

Kashmiri Muslims must understand and realize that they should not allow Srinagar and other towns and villages (from Paradise to Hell) to undergo the same fate as infrastructure damage in 16 towns and cities across Syria to include Aleppo, Raqqa, Mosul, Palmyra and so on as well Duma, Arbin, Harasta and Misraba in the Eastern Ghouta region.

At the same time, Kashmiri Muslims must also realize that India is unlike the U.S. Kashmir is also unlike Afghanistan. Indian troops are not aliens like the U.S. troops in the Middle East. India’s patience, punishment withstanding capability and resilience is far greater than Pakistan and its cronies in India.

Ironic but true, status quo ante of crisis is the desired choice and option of vested interests for political leaders like Abdullah’s and Mufti’s but also the separatist leaders. And, they fail to realize that they would be chased out of Kashmir valley if the adversaries gain an upper hand.

Like the Afghanistan’s cliché “War is Employment; Peace is Unemployment”, so also the 70 years conundrum best suits the interests of political leaders, parties and separatists: Abdullah Dynasty; Mufti Dynasty; Ghulam Nabi Azad Dynasty; Lone Dynasty; Geelani Dynasty; Mirwaiz Umar Farooq; Yasin Malik; and so on. What more, it also suits those political leaders and parties who are masquerading as champions of pseudo secular and liberal ideology to remain relevant in public life.

Let none suffer from illusions on the above count including the Congress Party and its allies crying hoarse invoking slogans like “Cardinal Blunder, Great Betrayal, Catastrophic consequences in the subcontinent, Darkest Day in Democracy” and so on.

My question to the Congress Party in particular and its allies in opposition parties is simple – “Why the failure of “WHAM of the Kashmiris?” Who is responsible and accountable for the distrust and hatred of Kashmiri Muslim and the explosion of such a “CRISIS of Confidence particularly after 1989”?

The real life ground realities are different. In 1989, as per well informed sources in J & K, radicalized component in the valley was at best only 10%. Today, in Srinagar and the towns of South Kashmir, the percentage of radicalized elements appears doubled or tripled. Is it possible to de-radicalize the so called fringe or fundamentalist elements ably tutored, aided and supported by Pakistan and its ISI and other non-state actors?

Impossible by any far stretched imagination, if the current crop of KLEPTOCRATS like Abdullah’s, Mufti’s and others are allowed to dominate and strangulate politics in the name of democracy what with the separatist leaders calling the shots at the behest of their handlers from across the LoC.

So, the Abdullah’s, Mufti’s and others besides the separatist leaders must be moved out of Kashmir valley. Some can be sent to a remote corner in Ladakh to cool their heels; and others to a remote uninhabited island in Andaman and Nicobar islands.

Otherwise, only fools can live in the expectation of success of “WHAM of Kashmiri Muslim of the present generation.”

Let me also share my personal experiences of my three tenures in J & K. I entered the valley in 1962 to attend a training program in the High Altitude Warfare School in Sonamarg followed by nearly 8 years active operational duty (three tenures - 1967-1970 in Krishnaghati and 1975-1977 in Poonch and 1989-1992 in Nagrota). Not to be left out is my stay in Gulmarg to guide students preparing for Staff College Entrance Examination.

In 1962, as students in High Altitude Warfare School, we were given permission to visit Srinagar once only. The orders issued were Simple. Be careful – even if a chicken is over run by your vehicle, the crowds will attack you with vengeance. Be extra careful not to hurt the people by any word or act that may provoke them to pounce on you.

On induction in 1967 into KG Sector as OIC Advance Party of my unit, I was given a list of “Do’s and Don’ts” that included a ban on breeding “PIGS’ in units. And, the advisory was sent to my unit asking them to dispose Yorkshire breed pigs reared in the unit for use during unit celebrations.

On arrival, the Unit established a Medical Aid Post at the entry gate to provide medicare and treatment to locals, which was highly appreciated, but yet failed to make a dent in peoples psyche.

In 1975-1977, as a company commander in Degwar Village area on the LoC in Poonch, the tasks assigned and executed by me personally were to 1) establish a MAP (Medical Aid Post); and 2) organize and run a school. Although the unit’s initiatives were highly appreciated, yet its influence on the psyche could not be ascertained. During the height of crisis in 1990s, the Pakistani artillery destroyed the School.

Nonetheless, every effort was made to praise the locals for their invaluable contribution to thwart Pakistani attempts in 1947-1948, 1965 and 1971 Wars providing intelligence and logistics support to the posts under the threat of artillery fire.

But the most disturbing deviation was realized in 1989 during my interaction with the Kashmiri Muslim drivers struck up on the road in Jammu-Nagrota when the Banihal Pass was closed to traffic due to heavy snowfall in 1991. Without exception almost all Kashmiri Muslim drivers were full of praise for the assistance provided to them. The officer accompanying me belonging to Jammu explained to me not to be hoodwinked by their appreciation. He cryptically highlighted that “once across the Banihal Pass” the same drivers would pour venom against India.

Finally, the Divisional Commissioner of Jammu, Vijay Bakaya, Kashmiri by birth, at a social event mentioned that three “Pundit” migrations were forced by the Kashmiri Muslims from the valley to include the one during 19th Century which forced Nehru’s ancestors to abandon their homes and flee. His remarks made a lasting impression on my mind on the Kashmiri Muslim psyche. Kashmiri Muslim nurtures a “Hate-Love” relationship with India.

That brings to the question that I have been asking myself. What is wrong if Kashmiri Muslims are forced to migrate to Pakistan, particularly, separatist leaders with family linkages to flee to Pakistan.

Be that as it may, less publicized are deeds of yeoman service of the armed forces and the Central Para Military and State Police Forces rendered in the past in pursuit of “WHAM of Kashmiri Muslims”. For example, in 1998 the army institutionalized “Operation Sadbhavana – meaning harmony and goodwill.” It was launched especially in rural areas near the LOC where insurgency and militancy had caused destruction to property and a sense of alienation prevailed among the people. The catchphrase of the operation is "Jawan aur Awam, Aman Hai Muqaam" (peace is the destination for both the people and the soldier).

Hardly the Kashmir political leadership or the local media ever covered yeoman service rendered by men in uniforms in pursuit of WHAM to include: infrastructure development, medical care, women and youth empowerment, educational tours and sports tournaments among other initiatives. Over Rs. 450 crore rupees has been directly spent and more funding provided through donors.

Army Super-30, 40 and 50 Initiatives launched in 2013 has enabled students to clear the difficult IIT-JEE. The Army has also established 53 English medium Army Goodwill Schools in places in Jammu and Kashmir such as Rajouri, Poonch, Boniyar, Uri (Baramulla), Khanabal (Anantnag), Karu (Leh), Kargil and Chandigam (Kupwara). Assistance has also been provided to approximately 2700 public schools. More than 10000 students in the Kashmir Valley itself and over 14000 students in Jammu are enrolled. Educational tours are organized annually to promote awareness of different states and cultures.

Next, the focus in the Women Empowerment Centers includes: skill development, awareness is raised about health and birth control, information regarding banking and loan procedures, basic education is imparted including operating computers, fashion designing and craft related skills. Under this initiative centers such as the Women's Vocational Training Centre, Poonch, Usha Fashion Design School, Baramulla and Women Empowerment Centre, Baramulla have been set up.

Medical Camps are conducted on a regular basis by the Indian army. A Military Hospital in Kargil has also been set up with services being free of cost. The Pritam Spiritual Foundation (Poonch) has provided artificial limbs free of cost to over 3100 people who have been victims of militancy, mine blasts or cross-border firing. Even veterinary aid camps and free treatment to civil animals are also offered.[59]

India is now caught at the cross-road of epoch making milestone. A long-haul lies ahead. As a nation, people need to be mobilized to make more sacrifices to overcome the threats and challenges that lay ahead them. Strategies must be identified, formulated and effectively implemented striving to develop full synergy of the full government machinery in pursuit of success in “WHAM of Kashmiri Muslims”. The “Hybrid Warfare” strategy to counter Pakistan in Kashmir simultaneously project it inside Pakistan to play-back in the same coin – Bleed Pakistan by 1000 cuts”.