New Delhi, August 7: With a stunning majority of 370 Ayes, the Parliament on Tuesday scrapped out Article 370 completely making it one of the historic decisions of 2019. Adding another feather to the victorious cap, President Ram Nath Kovind has declared abrogation of the provisions of Article 370 of the Constitution, which gave special status to Jammu and Kashmir. 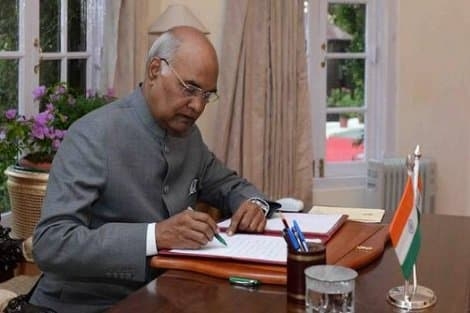 The move came after both houses of Parliament passed a resolution in this regard. The official notification signed by President late on Tuesday night said, “In exercise of the powers conferred by clause (3) of Article 370 read with clause (1) of Article 370 of the Constitution of India, the President, on the recommendation of Parliament, is pleased to declare that, as from the 6th August, 2019, all clauses of the said article 370 shall cease to be operative...”

It also said, except the following which shall read as under, namely: "370. All provisions of this Constitution, as amended from time to time, without any modifications or exceptions, shall apply to the State of Jammu and Kashmir notwithstanding anything contrary contained in article 152 or article 308 or any other article of this Constitution or any other provision of the Constitution of Jammu and Kashmir or any law, document, judgement, ordinance, order, by-law, rule, regulation, notification, custom or usage having the force of law in the territory of India, or any other instrument, treaty or agreement as envisaged under Article 363 or otherwise." 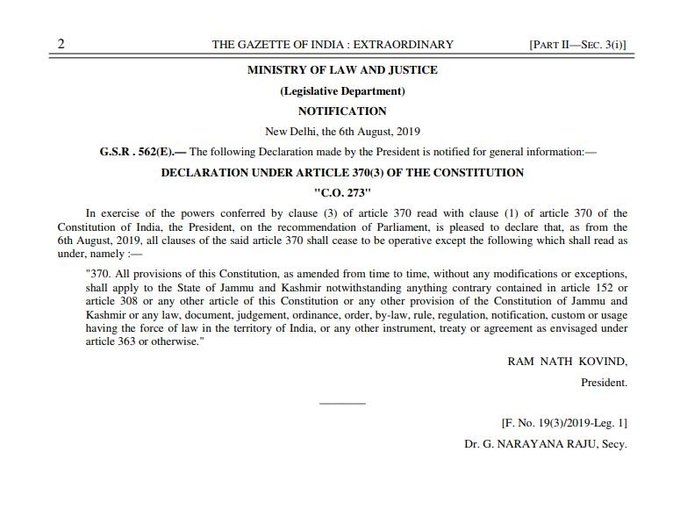 The BJP-led government's bold move to revoke the special status of Jammu and Kashmir and bifurcate the border state into two Union territories secured Parliament's approval on Tuesday with the Lok Sabha passing the new measures with an over two-thirds majority.

The Rajya Sabha gave its approval to the resolution on Monday. The government had announced on Monday the removal of some provisions of Article 370 to take away Jammu and Kashmir's special status and proposed bifurcation of the state into two Union territories -- Jammu and Kashmir and Ladakh, a far-reaching decision that seeks to redraw the map and future of a region at the centre of protracted militancy.

With this, the ruling Bharatiya Janata Party (BJP) has fulfilled one of its poll promises within 90 days of the Modi government 2.0 taking charge.