Who are against CAA and NRC? 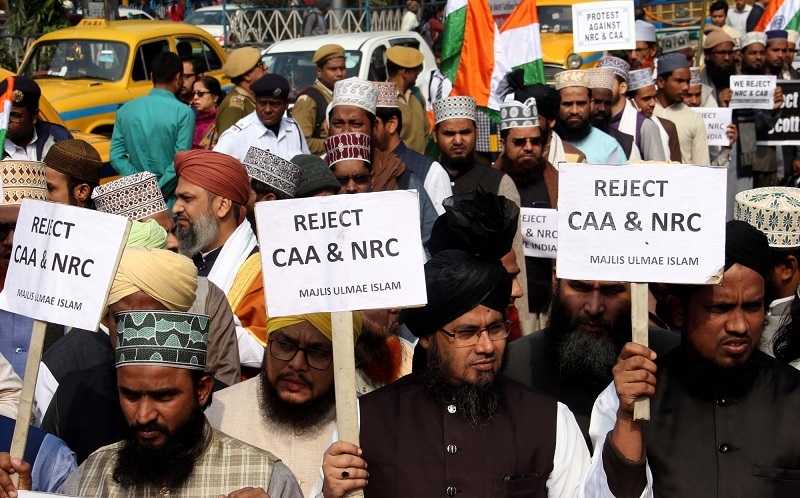 There is a lot to be read between the lines when it comes to the issue of staged nationwide protests against the CAA (Citizens Amendment Act) and the NRC (National Register of Citizens). These are not simple protests against one law which has been passed by both the houses of the parliament and another proposed law which will determine who is the legal citizen of this country and who is an intruder? Another misconception being propagated by the media is Muslims do not understand the complexities of both the laws hence the protests.

Actually, the Muslim mass, its leaders and the instigators, all, understand that there is nothing to fear from both the legislations and the citizenship of those who are bonafide residents of this country cannot be and will not be questioned. Then why is this hullabaloo?

It is important to understand the respective agendas of all those who are involved in protests and running a tirade against the said legislation. Muslim mass is the shoulder on which “Tukde Tukde” gang and the Urban Naxals are resting their guns and firing. Opposition parties, without giving it a thought that what consequences their stance will result into, are adding fuel to the fire.

First of all it is important to understand Muslim mind set and their agenda. The Devbandi Muslim doctrine is no different than the global Wahabi and Salafi ideologies. It propagates that it is the duty of every Muslim who is staying in Dar-ul-harab (A country which has non-Muslim rule) to convert it into Dar-ul-Islam (A country ruled by the Muslims). It is not that only the radical Muslims follow this doctrine; one cannot differentiate between the Madrasas which teach this ideology and those who don’t. Then how this Dar-ul-harab India, which could not be converted into Dar-ul-Islam even by Aurangzeb, can be made so by today’s Islamists?

A long term strategy was conceptualised by the proponents of the Muslim Khilafat. Creation of Pakistan was one step in that direction. When in the year 1924, Ottoman Empire’s Khilafat (Caliphate) was abolished by the British, the Muslim umma and the clergy had deduced that it no longer can convert the Non- Muslim population of the world into the Muslim one by the sheer power of the sword. Democratic political set-ups, the world over, had started replacing the Monarchies. And it was pretty well known to the Muslim hegemonists that in the democracies, demographics matter the most.

It is a fact that in India, rate of growth of Hindu population is much less than that of Muslims. Bangladesh, which is a proclaimed Islamic Republic will remain so even after few millions of its residents are illegally pushed into India but the latter will certainly lose its Hindu character when Rohingya and Bangladeshi intruders combine with the burgeoning local Muslim population. Similar phenomenon by the Islamists is being implemented in Europe too.

Erstwhile Libyan dictator Gaddafi is on record to say that the Muslims don’t need any Jihad to win over land of Europe; the fifty million strong Muslim population already settled there is sufficient to take over control of the continent.

Similarly, in India too, the Islamist dreams of Gazhwa-e-Hind, Nizam-e-Mustafa and Dar-ul-Islam can only be realised through demographic explosion. Therefore, illegal migrations from the neighbouring countries are being abetted to couple it with burgeoning local Muslim population. Hindus and Sikhs comprised 23 percent of the population of Pakistan in the year 1947. Today, it stands less than 1.6 percent. Where the entire populace has evaporated? Whether it is a facade of democratic dispensation or a naked dictatorship in that country, persecution of minorities continues unabated hence a drastic drop in population. Most of the Hindu and Sikh mass of that country either has migrated under duress or has been converted to Islam.

Are those Hindus suffering from so called secular amnesia listening? Even a moderate increase in Muslim domination in political set up of this country, will pave the way for an Islamic government. The world powers which are interested in the concept of the global peace and harmony too have a huge stake in India maintaining its Hindu character.

Thousands of years of history, of India of not attacking any country, speaks for itself when juxtaposed with more than one thousand years of the Islamic history full of violence and barbarism. Among other sections to whom the Muslim mass has rendered its shoulder to fire from, is misguided and misinformed band of Urban Naxals. This group has singular agenda of joining hands with anybody who is endeavouring to destabilise this country. They support Maoists and the Kashmiri separatists in one breath. And it wouldn’t be an exaggeration to say that in case of India going at war with say Pakistan, this gang will be in the forefront of the ISI accomplices. They get support from left-leaning media and some celebrities including from film industry; interestingly, most of them don’t know what they are protesting against. It is fashionable for them to join the bandwagon of rabble-rousers and to remain in news; they support anything which could even have anti-national ramifications.

The political parties which stoke the fire remain unmindful of the consequences of such protestations. For petty political gains, these parties organise and render support to such activities which result into disturbances and incidents of arson. Ideological bankruptcy of such parties must be conclusively debated publicly and the electorate should show maturity to ensure permanent exit of such parties from the political landscape.

For example, Bala Saheb Thackeray, founder of the Shiv Sena, vehemently advocated expulsion of illegal Bangla Deshi immigrants from this country. The irony is his political descendants who solicit votes in the name of his legacy, in order to remain in power, have backtracked on the question of CAA. Second example is of Chief Minister of Punjab, Amarinder Singh. He declared that CAA will not be implemented in the state of Punjab.

In this context, he should be questioned that if the Sikhs, who are a minuscule minority in Pakistan and are still persecuted, migrate to Punjab, will he deny them citizenship?

In the year 2010, in Aurkazai tribal agency of the Khyber Pakhtunkhwa province of Pakistan some Sikh traders were demanded to pay jaziya by the Talibani terrorists of that country. The brave community refused to pay and paid the price when some of them were kidnapped and killed. The incident provoked streams of Sikhs to migrate from there. Now if they don’t come to mother India, where will they go? Captain Amarinder Singh and people of his party owe an answer to the brave sons of Bharat Mata, the Sikhs. Similarly, as per the records of Human Rights Commission of Pakistan, every year thousands of Hindu girls are abducted, forcibly converted to Islam and married to Muslim men. Under the circumstances, if Hindus keep on migrating from Sindh province of Pakistan, where will they go if not India?

The temple of democracy, the parliament of India has passed the CAA and the PM and the Home Minister have taken pains in explaining to the Muslim populace that no Indian, belonging to any religion has anything to worry. In simplified terms, it provides citizenship to persecuted minorities, comprising of Hindus, Sikhs, Buddhists, Jains, Christians and Parsees of Pakistan, Afghanistan and Bangladesh and prevents illegal intrusion from other countries.

Now if the trouble makers are still hell bent on creating disturbances, who should be blamed? It is evident that anti-national powers have unleashed their agenda and the only way to defeat their nefarious designs is the clarion call for the nationalist forces to unite. The manifestation of the united voice must be done through the nationalist organisations.