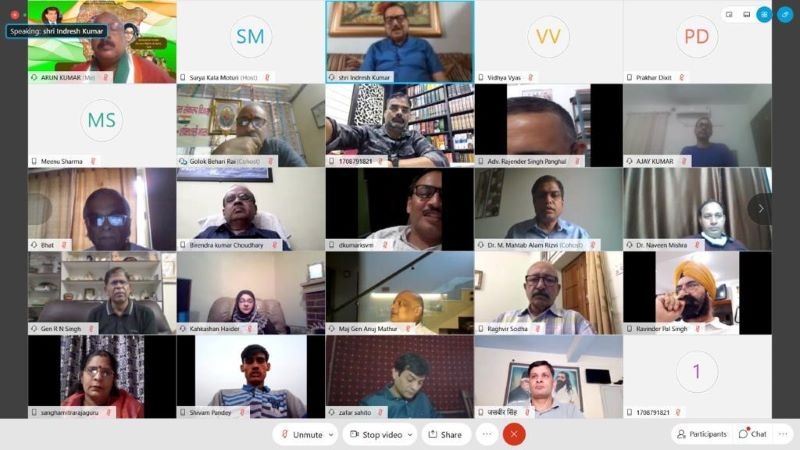 New Delhi, Oct 2: Extending wholehearted support to the demand for independent Sindhu Desh, Indresh Kumar, Patron of Forum for Awareness of National Security (FANS) and member of the National Executive of RSS said predicted that Pakistan will disintegrate in coming years as is the very foundation is based on untruth.

There was no Pakistan before 1947 i.e. before the partition of India, similarly, there was no Pakistan in the coming years. The existence of present Pakistan will be wiped out from the world map and it will be divided into a number of independent countries, Indresh Kumar said.

He was addressing an international webinar on “Sindhu Desh Freedom Movement: Challenges and Opportunities” organized by FANS recently. He said that Pakistan is destined to be disintegrated. It first got broken in 1971 with the creation of Bangladesh. Now what remained as West Pakistan is also on the verge of balkanization with movements for the liberation of Pakhtunistan, Baluchistan, Sindh, and other provinces are gathering momentum. All these regions want to be liberated from the social, political, and economic domination of Pakistan.

Questions are being raised on the very existence of Pakistan, Indresh Kumar said adding that the regions of Pakhtunistan, Baluchistan, Sindh, are ready to break away from Pakistan and the demand for their liberation has picked up. After some years, there will be no Pakistan on the world map because its very existence is based on untruth and fallacy.

He said that those who are born are sure to die. Pakistan is a nation born on 14th August 1947; therefore, it is bound to die someday or the other. India is created by God Almighty. With the demand for independent Sindhu Desh gathering momentum, Pakistani rulers are worried that they might lose Sindh in near future. The internal situation in Pakistan is not very promising, which has forced them to accept the slavery of the Chinese. There is no future for Pakistan that has all the way sponsored terrorism in the region.

Referring to the 1947 partition he said that the British had their rule on a large part of India. The partition was a bloody event that witnessed the killing of millions of people, million others were uprooted from their homes and hearths. In 1971, East Pakistan was liberated as Bangladesh and now Pakistan is on the verge of breaking into several independent nations as Sindhu Desh, Baluchistan, Pakhtunistan, Gilgit-Baltistan, and PoK. 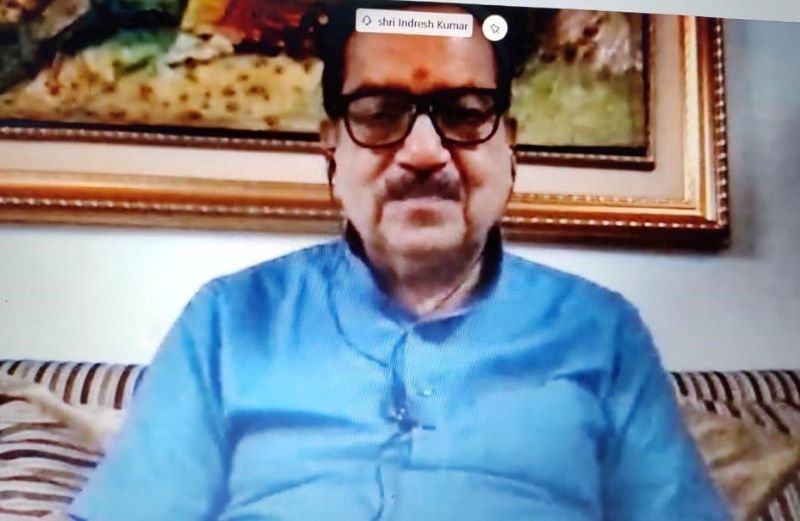 He said that the Sindhu Desh liberation movement is one such movement that the residents of Sindh have launched for many years. On the basis of its geography, language, culture, prosperity, and happiness, Sindhu Desh is one of the oldest civilizations. This is one movement for the identity and pride of the Sindhi people. This has never been a part of Pakistan in the past and always remained an independent country.

The rulers in Pakistan are trying to suppress this movement by conspiring against the Sindhi people with an intention to create hurdles in the movement and to weaken it, Indresh Kumar said.

The movement for independent Sindhu Desh began soon after it was merged with Pakistan and voices were raised against Pakistan’s tyranny. The movement which began as a spark has now acquired the dimension of a brightly burning star challenging the hegemony of the Pakistani rulers and their henchmen.

Indresh Kumar said that they are with the Sindhu Desh movement and will always support it. India was never an expansionist country, neither was it an imperialist nation. It has always helped the nations in distress and initiated to help all such people and provinces to tide over the difficulties. The world has witnessed this in these distressing periods of Covid-19 when India helped as many as 150 nations of the world.

He said that Sindu Desh is historical truth with an ancient tradition, identity, and culture. Against this background, Pakistan has its foundation on the false and untrue principles. Pakistan has inflicted atrocities on Sindh people using its state powers. It has created unrest in this region in the name of religion. All the people of Sindh should rise unitedly against this tyranny of Pakistan, ISI, and other agencies and frustrate them, Indresh Kumar said.

Praising the efforts for the liberation of Sindh, Indresh Kumar said that the soul of Sindh can be understood through its language which is very old and associated with its pride and identity. He appealed to the Sindhi people to take up to social media to convey their voice to the world community and assured that Indian organizations will support them in this venture. He also called for better coordination amongst all the Sindhi organizations for this purpose.

He appealed to the leaders of the movement to carry the voice of the movement to a large section of the world community through social media. All the Sindhi leaders should unite and raise their voice to expose the tyranny of Pakistan before the world. They should also strengthen the Sindhi people against Pakistan. There are supporters of this movement in the world including India and they should try to convince the world opinion in this regard. He also urged them to be vigilant against the conspiracies of Pakistani rulers. 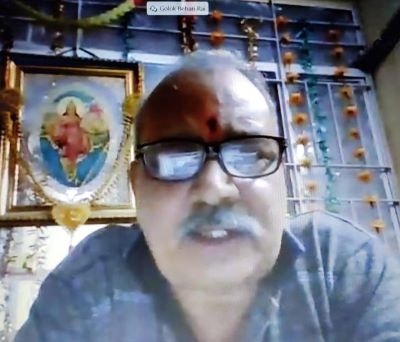 In his address FANS General Secretary Golok Bihari Rai said that Sindhi society is a rich and old civilization. The very identity of the region and its people are threatened with its merger with Pakistan. Sindh was associated with India earlier but the conspiracies and fundamentalist attitude of the Pakistani rulers have damaged this Sindhi identity to a great extent.

He said that the regions of Baluchistan, Pakhtunistan, Punjab, Singh had their identity intact when they were associated with Greater India. After the partition, Pakistan inflicted untold savagery and atrocities on these regions to damage their identity and culture. Women, children, and others were subjected to untold miseries. Their language was jeopardized and identity endangered.

The movement for independent Sindhu Desh was going on since the times of Partition and now this movement has gathered speed on the global platform. In the near future, the movement will culminate to its desired goal and there will be no more Pakistan, he said.

Mir Salim Sanai of International Friends of Sindh Organizer, Geneva addressed the webinar saying that the ISI and Paki army are inflicting atrocities and insults to the Sindhi people. Pakistan has never cared for the development of Sindh and encouraged terrorist activities. Today, the entire Sindh is fighting the cause of their freedom and soon we will achieve our goal, he said.

He appealed for support to their movement from India and the world community. He said India should openly support the Sindhu Desh liberation movement. There is no difference between ‘Sindh’ and ‘Hind’. He said that the demand for independent Sindh is in the interest of India as we are friends with India and appealed to India to help them tide over Pakistani slavery and atrocities. He said, millions including Muslims are being killed in Sindh and now we are all united for independence. 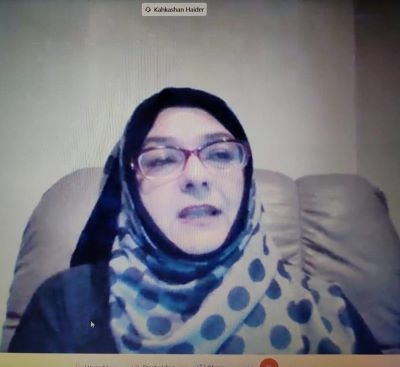 Kehkashan Haider, Human Rights Activist from the USA said that Pakistan betrayed Sindh right from the Partition days. Sindhi Muslims are labeled as Mujahirs and they were subjected to untold atrocities and miseries. The people of Sindh are deprived of fundamental rights. India was partitioned due to a conspiracy hatched by Mohd Ali Jinnah and the British Government. The situation of the Sindhi people deteriorated soon after joining Pakistan. The Pakistan Army behaved with us in an indecent manner in the name of religion. She said that we are all united for the liberation of Sindhu Desh; we want nothing short of ‘Azadi’ from Pakistan, she said.

She said that Pakistan only bred terrorism in the name of religion. Now we want to come to India. We are proud to be ‘Sindhi Hindustani’. She appealed to the Narendra Modi government to support the Sindhu Desh movement. We want to set up our Government in Exile in India and prepared to fight for the peace, progress, prosperity, and happiness of Sindhu Desh and ready to sacrifice our lives too. The Government of India should support us so that we can succeed in our mission, she said. 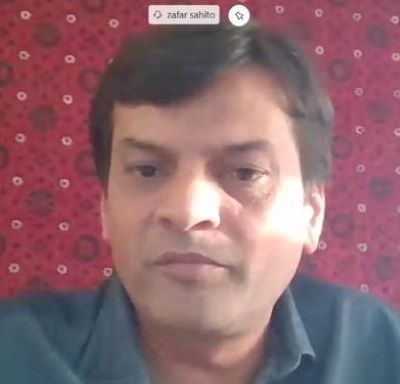 Zafar Sahito, Vice-President of Jio Sindh Thinkers’ Forum, USA, in his address said that Sindhis are always neglected by the Pakistani rulers. Our voice is suppressed in local and international media like that of the Baloch, and Pashtuns. But the people of Sindh have preserved their identity and culture braving the atrocities and tyranny of Pakistani rulers. This is the fight for our identity and culture.

Soon after its creation in 1947, Pakistan has become a headache for the world. It has emerged as the main sponsor of terrorism and India too felt the pangs of this proxy war. The terrorists have the full support of the Pakistan army and they are spreading terror in the world in the name of Islam. It is, therefore, necessary to weaken Pakistan and break it. With the breaking of Pakistan not only India but also Asia, Europe, and the rest of the world will be free from the poison of terrorism, he said.

He said that intelligent Muslims must understand that the Pakistan government and the army are exploiting the Muslims on every front. He appealed for the support of this movement so that they can preserve their identity and civilization.

Accusing Mohd. Ali Jinnah of partitioning India in the name of religion, he said that this conspiracy of breaking people in the name of Islam must stop now. Sindh is the major contributor to revenue to Pakistan but it is neglected. There is no Sindhi who claims to be Pakistani citizen, he said.

So long as Pakistan remains strong, Sindhis and India and other neighbors will continue to suffer. Therefore, weakening it is in the interest of peace, stability, the progress of the region, he said.

Raghvir Singh Sodha, Jio Sindh Movement, World Sindhi Congress, India, said that Pakistan is not a country, it is only an army. India should contain Pakistan to put an end to its tyranny and atrocities. The world community should not accord any status to Pakistan.