From Trump to Prince Charles and Netanyahu --NAMASTE going global 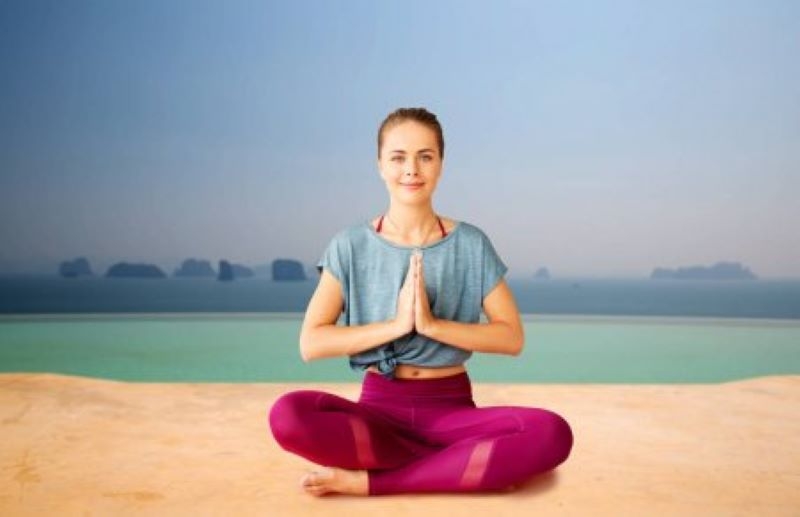 A greeting is the first spark that ignites the relationship between two individuals. Tibetans stick out their tongues in greeting. In Qatar, Yemen, and Oman, people touch their noses. When it comes to the Kiwis, they rub their faces whereas, in Greenland and Tuvalu, they sniff faces. In most other countries, individuals shake hands or blow a kiss. These are just a few examples of how people first greet each other across the globe. India, as always, is a little different. Indians fold their hands with respect and say, “Namaste.” 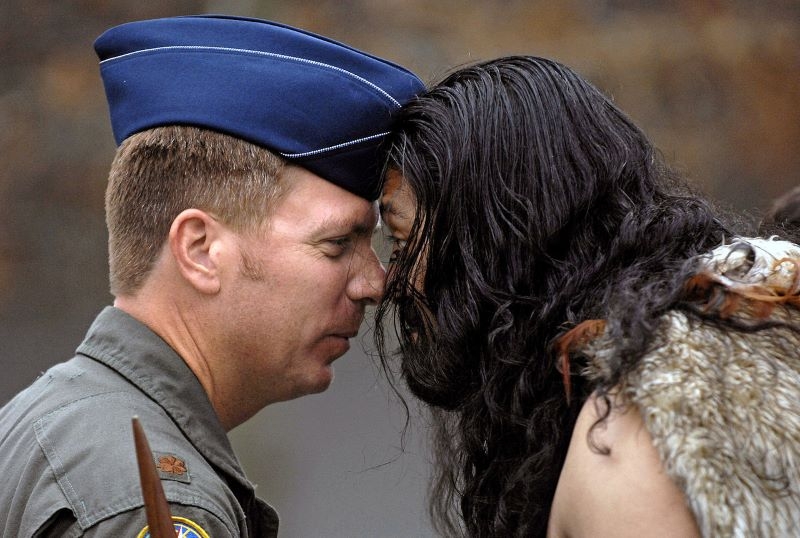 Namaste has become a global phenomenon over the last few days. It has been trending on international terrain, courtesy the “coronavirus”. This Covid-19 pandemic has been frightening people around the world with its increasing number of casualties by the day. This deadly virus spreads through close contact. So, the doctors are strictly advising against shaking hands or making close proximity with anyone as preventive measures. 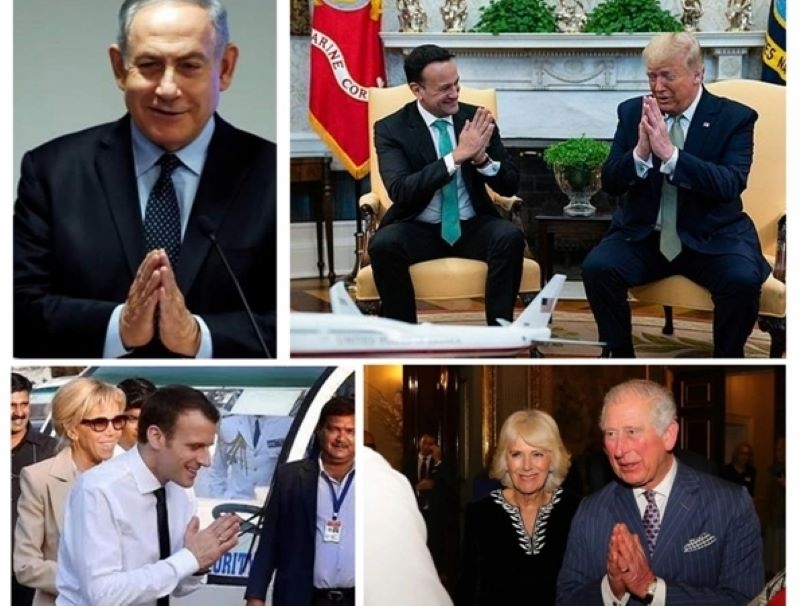 This is where Namaste has come to fill the void, rather than come to our rescue! The whole world is adopting this Indian salutation for greeting one another. It not only avoids “bodily contact” but also enables greeting another person with respect from a distance.

Many important figures on the planet seem to be propagating Namaste now --- from the American President Donald Trump to British Royalty Prince Charles. Recently, Israeli Prime Minister Benjamin Netanyahu urged his countrymen to adopt Namaste. Addressing a press conference, he said that one of the simplest ways to prevent this virus from spreading would be to avoid handshakes and replacing it with Namaste. He went on to demonstrate how it’s done. 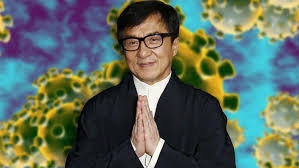 During a recent meeting at the Oval Office, Trump and Irish Prime Minister Leo Varadkar ditched their handshake tradition and opted for the Indian salutation. French President Emmanuel Macron has also made it a protocol to greet his counterparts with a Namaste. For once, even the British had to bow down to India’s ancient tradition. Prince Charles has become the new face of Namaste. A video of His Royalty folding his palms to greet others at London’s Annual Prince’s Trust Awards has gone viral on social media. The Indian Raj has officially begun, if only in matters of gesture.

Congress MP Shashi Tharoor couldn’t agree more. Reacting to Netanyahu’s appeal, he tweeted, “Behind every Indian tradition, there is science. That is why India is great.” This was rightly followed by a Namaste emoticon. An Indian official aptly tweeted, “Namaste has deeper significance and in times of #COVID19 it’s best to switch from physical contact to spiritual bonding.”

Yes, usually people are less aware of the higher objective of the Indian style of salutation. “Namaste” is not just a mere gesture of greeting. It has many “underlying” deeper meanings rather than being mere formality to greet the second person. We press our hands together, our palms fully touching each other and fingers pointing in an upward direction. The thumbs are kept close to the chest and we bow slightly while saying Namaste. According to ancient Vedic text, this word means, “I bow to the DIVINE in you,” or “The divine in me bows to the divine in you.” 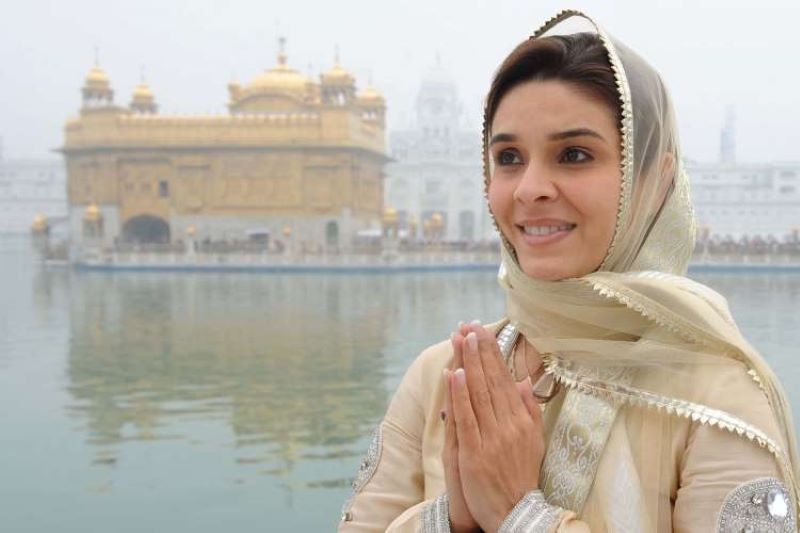 The term is derived from two Sanskrit roots, Namah and Te. The word Namah means bow or obeisance. Te means to “you” who is controlled by DIVINE being. In other words, Namaste spiritually denotes bowing to all-omniscient THAT, instead of mortal beings. It is a specific way of showing respect to others and at the same time conveying that one is “equal to another” and HE being common to all.

In this act of greeting, we do acknowledge that the divinity, the life force, or the DIVINE energy, within oneself is the “same” in others as well and that intrinsically pervades everywhere. The “prime purpose” here is to “see or feel or adore” GOD in every person, or even in every plant and animal... Is it not a grand idea with a grand objective? In fact, the sages of ancient India realized that life is “meaningless” if one’s actions or pursuits are not contributing to realizing God. So, NAMASTE is the first step towards that goal. Of course, at every yoga center across the world, the meaning of NAMASTE is usually informed at the outset to the aspirant so that yogic practice becomes more effective. The objective being practicing seeing GOD in every living being or in every object. Having realized the depth of the Indian culture one of the greatest thinkers of the modern times -- Francois Voltaire once thundered -- “The whole earth needs INDIA, which alone needs no one, must be the most anciently civilized land”. But in the home country, there are top intellectuals who just shrug aside, or even denigrate, Indian ethos and values without ever making any efforts to study them. What a big paradox it is!

Well, whether one wants to know and respect the universal objective of NAMASTE or not, but, I am quite sure, the Indian salutation is now quite being considered as the safest and secure way to greet people.

Let’s hope the Coronavirus stays true to its manufacturers (read Chinese) and doesn’t last long. Let’s also hope that Namaste also stays true to its creators (read Indian sages) and lasts long, particularly in order to foster the universal brotherhood, the entire world as a family (Vasudhaiva kutumbakam). Is it not the need of the hour when the mindless hostility, brutal violence, and terrors are hurting the modern civilization? The coronavirus may be prevented by new "vaccinations but not the virus of the inner hostility and hatred unless we affectionately bow down and say NAMASTE!