The RSS and the Sikhs 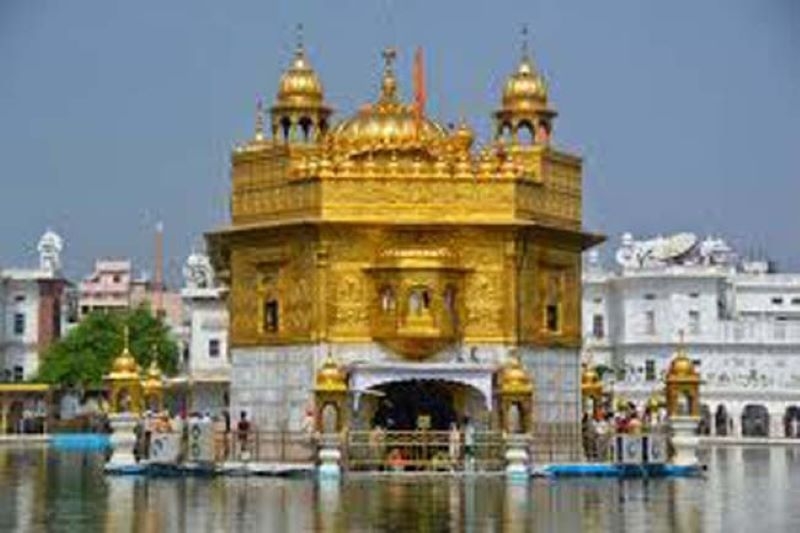 A lot of propaganda has been done by vested interest bodies to establish that the RSS is against the Sikh ethos and it is the agenda of the organization to finish Sikh religion. This falsehood must be exposed simply because no organization follows the Sikh philosophical tenets more than the RSS.

One can wake a person who is asleep but cannot wake somebody who is pretending to sleep. Therefore, any attempt to bring truth in front of those who are hell-bent upon creating a false narrative will be a futile exercise. However, the truth must be shared with the Sikh masses who have an exceptional history of sacrificing their lives for this country and nationalism is ingrained in their bone marrow.

The tenets established by the Sikh Gurus in philosophical, ideological and social terms are followed by the RSS in totality. As far as nationalism is concerned, the RSS is not sparing any effort to unify the whole nation which was the pious vision of Shri Guru Gobind Singh ji.

If we analyze the teachings of Shri Guru Nanak Dev Ji, his tenet of Kirat karo, Naam japo and Vand chhako is espoused by the RSS in its entirety. Kirat means one should earn his livelihood with just and truthful means; the theory of Karma is followed by all those who adhere to the teachings of the RSS.

Similarly, Naam is remembering the almighty with complete devotion; names of Ram and Hari are mentioned in Shri Guru Granth Sahib for thousands of times. The RSS believes in the Vedic tenet of Ekam sad viprah bahudha vadanti (एकम सत विप्रा: बहुधा वदन्ति). That means the creator Almighty is one and the learned people interpret his existence in various ways. Shri Guru Nanak Dev Ji's concept of Ek Omkar (ੴ ) is no different than the Vedic Ekam Sad (एकं सद ).

The principle of Vand chhako of Shri Guru Nanak Dev Ji is followed by the RSS volunteers in its totality. The organization unflinchingly believes that the age-old Indian tradition of trusteeship and sharing of the resources with fellow human beings can be instrumental in alleviating the miseries of the poor and the underprivileged of this earth. One should read the book “Integral Humanism” written by the RSS ideologue late Pandit Deendayal Upadhyay to understand how dedicatedly the organization follows the ethos of Vand chhako.

Actually, the first two principles of Kirat karo and Naam japo pertain to an individual’s family responsibilities and spiritual advancement but the third one, Vand chhako is essentially connected with a person’s social and national duties. The RSS, not only in thoughts but more in practical terms, right from its inception, has worked tirelessly to the pious job of societal upliftment.

The pious principle of Seva is another inseparable part of the Sikh ethos. Today, with an exceptional degree of commitment and dedication, the RSS swayamsevaks (Volunteers) are running lakhs of Seva karyas (Service projects). One needs to visit the underprivileged and tribal areas of India to see how the selfless work of the swayamsevaks has been instrumental in the transformation of the said areas and how the weaker sections are being empowered. 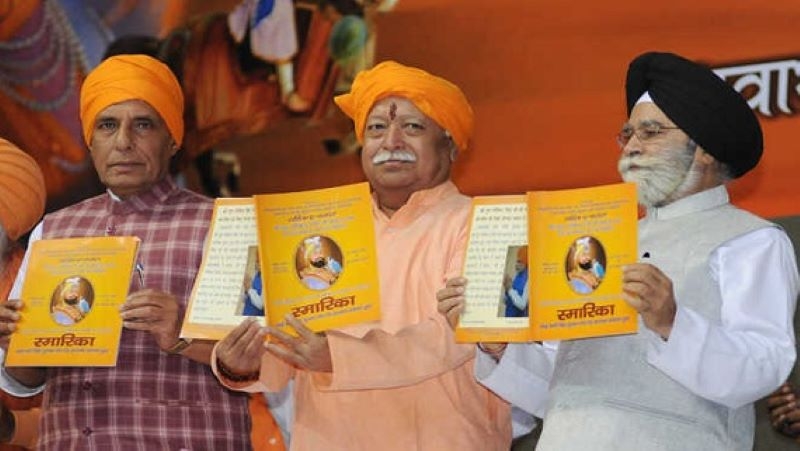 Another virtuous initiative taken by the great Sikh Gurus was the creation of social awakening against the discriminatory caste practices and untouchability. The doctrine of Sangat and Pangat was perpetuated by them to eradicate this inhuman practice from the social fabrics of India. The RSS, right from its inception has been following this pious practice conscientiously and calls this social brotherhood as “Samarasta”. Words like untouchability are not even part of the RSS lexicon.

Shri Guru Gobind Singh ji’s Panj pyaras (First five Khalsa) came from all five geographical directions of the Indian nation. History stands testimony to the fact that in the second millennia, he was the first person to visualize the consolidation of the whole Indian nation and gave a Clarion call to defeat the tyrannical Jihadist forces.

Today the undiluted nationalism of the RSS indicates the resolve of the organization to walk in the footsteps of the revered Guru. Sangh geets (Songs sung in the RSS shakhas and other programs) pay tribute to the sacrifices made by the great Sikh Gurus to uphold the values of the great Indian culture and Dharma. Shri Guru Gobind Singh ji invoked the blessings of goddess Shiva to fight the savage Jihadist Mughals. Swayamsevaks take inspiration from the Veer Ras Shabad of Guru ji, “Deh Shiva var mohi ihe” when they prepare themselves to serve their motherland and reinforce the sentiment of nationalism among the compatriots.

Not a day of the RSS swayamsevaks passes without the recitation of Ekatmata Mantra and Ekatmata stotra. Alongside with the other Indian spiritual, cultural and historical names, Sikh tenets, philosophy and Mahapurushas find their respectable place in both; the Mantra and the Stotra.

Nothing more surprises when some misinformed sections accuse the RSS of being anti-Sikhs. Benefit of this narrative is taken only by the separatist elements and those anti-India forces like the ISI of Pakistan which on one hand nurtures the Jihadist mindset and on another, attempts to poison the minds of those who historically had been fighting against the Jihadists.

The vested interest elements are trying to create new and false narratives. For example, it is being propagated that the RSS had a negative role to play in the 1984 anti-Sikh riots. The truth must be brought in the public domain; there are innumerable testimonies of the Sikh brethren who said that when the ravaging mobs instigated by the Congress leaders were attacking the community, RSS swayamsevaks came to their rescue and even risked their lives to protect them.

In Delhi, unfortunately, because of strong mobilization by the riotous Congress leaders, damage of life and property of the Sikh brethren was massive and incalculable, despite efforts of the swayamsevaks to protect it. However, Swayamsevaks were successful in protecting their Sikh brothers in the remaining areas of India. It is a known fact that Sikhs are scattered throughout India and are present in small numbers in various cities.

As per diktats of the then Congress leadership, marauding mobs were ready to damage the Sikh life and property in those cities too. There, the swayamsevaks made groups to protect their Sikh brethren and enlightened the people at large about the truth that the Sikhs are part and parcel of the blood and flesh of Mother India and no harm must be done to them. Various accounts, of the swayamsevaks making a defense line for the Sikhs, can be heard from the latter belonging to states like Uttar Pradesh, Rajasthan, Maharashtra, Bihar and Madhya Pradesh.

It is for everybody to see how the RSS swayamsevaks, some of whom are in the government also as ministers, are endeavoring to get the culprits of the Sikh massacre punished. Compensations to the victims, which were denied during the Congress regimes, were expedited by the BJP government.

When militancy was at its peak in the state of Punjab, innumerable attempts were made by the terrorists and their mentors sitting across the border to create a wedge between the two communities, Hindus and Sikhs. The RSS was in the forefront to thwart that nefarious design. On 25th June 1989, a terrorist attack was launched on RSS shakha in Moga when 25 swayamsevaks lost their lives.

The RSS leadership was quick to issue statements that it was a terrorist act and Sikh brethren did not have any hand in it. Even a resolution to that effect was passed in the Akhil Bharatiya Karyakari Mandal of the RSS.

Such conscientious endeavors by the RSS reinforce the belief of the organization that the Sikhs are an inseparable part of the great Indian cultural stream flowing from the time immemorial. The accusations of certain sections that the RSS wants to dilute Sikhism are nothing but a concoction of lies, obviously by the secessionists. A true Sikh will endorse the fact that when the RSS wants to strongly imbibe the values given by the venerable Sikh Gurus then it is perpetuating the ideals of Sikhism nationally and not diluting it.

The RSS strongly believes that the whole world is looking towards India because of its ethos of “Vasudhaiva Kutumbakam”. The Sikh tenets have a big role to play in establishing the dictum of co-existence in the world; the Sikhs have to ensure that the messages and teachings of great Gurus are disseminated everywhere; their tenets of Seva, Samrasta, and trusteeship become the hallmark of the Indian resurgence. This surely will defeat the sinister designs of the separatist forces also.