Opening the RSS to the world - I 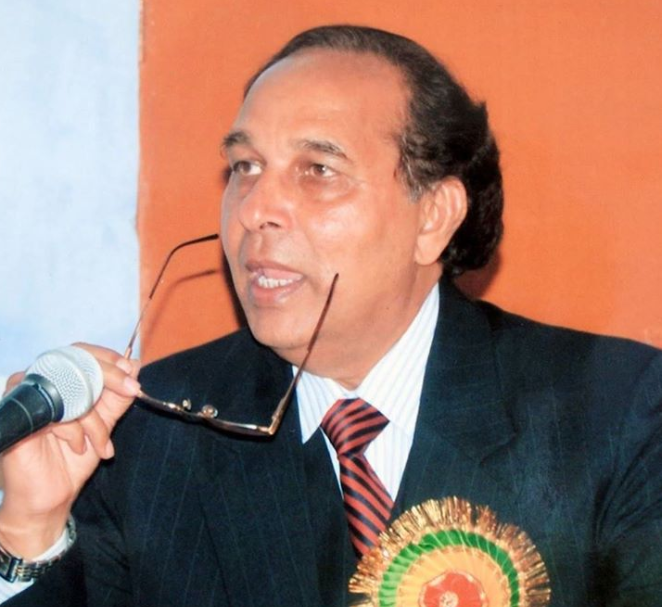 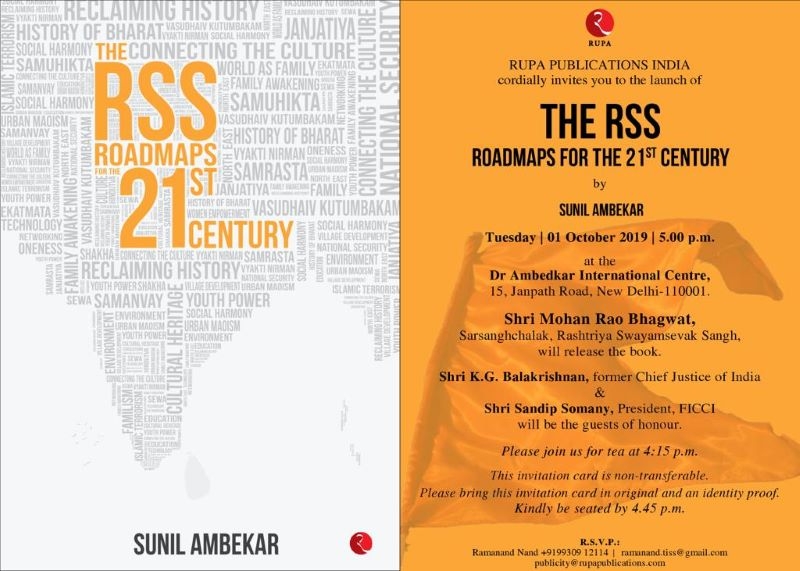 “The RSS: Roadmaps for the 21st Century” is authored by Sunil Ambekar. It is published by Rupa Publications Pvt. Ltd, 2019, New Delhi, 110002. The scope of the book is confined to: The origin of RSS, Doctor Hedgewar’s Vision: Ideas that Shaped the Sangh, Shakha System and its Structure: How the RSS Works, The History of Bharat, Rise of Sanatan Hindutva, Caste system and Social Justice, The Sangh Parivar in Globalized scenario, Family and Emerging Modern Relationships and Women’s Movement.
The Rashtriya Swayasevak Sangh (RSS) theme has been the subject of many books that are available in India and Abroad tracing its background, origin, and further journey which it has made already. The book under review is unique in many ways. It highlights many aspects that are relevant in the present context. The functions of RSS have increased tremendously as Swayamsevaks have achieved top positions in government and the core philosophy of ‘Hindu Rashtra’ and ‘Ekatmata’ have become the mainstream of our Social and political Spheres.

It covers the vision of RSS: When India becomes the Hindu Rashtra, what shall be the place of Muslims along with people of other faiths? It throws the light about the RSS project of history writing. It focuses on Hindutva and how it solves the caste politics. It examines the RSS view on social issues pertaining to the changing nature of family, rights of people with different sexual orientations. Ambekar x-rays the milestones of RSS, its achievements, and futuristic ideas.

Being associated with the Shakha system closely, the author highlights the internal working of the Sangh. It reflects the real-life experiences. Its study is imperative to those who are interested to understand the functioning of this mighty machine and its future plan for the society and nation.

The RSS played a pivotal role in the social, religious, and economic matters since its origin. It deeply reflects patriotism and nationalistic philosophy. With this book on the RSS and its inner working, Ambekar is opening a window to the world of the RSS and is bringing the Sangh’s pasts with its potential future role in Indian society. This book is a ready reckoner for anyone interested in the Sangh, its philosophy, and future plan of Sangh. 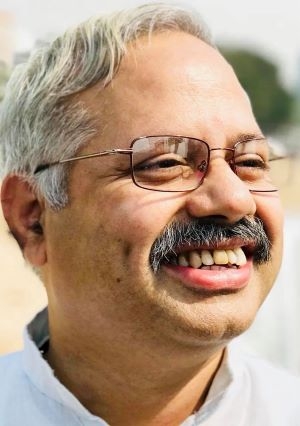 The author Sunil Ambekar is a high ranking pracharak and until recently held the position as National Organizing Secretary of the ABVP. He took this responsibility since 2003. He is a swayamsevak from his childhood. He rose through the ranks from Organizing Secretary of ABVP in the Vidarbha Region to National Secretary, Regional Organizing Secretary and Joint National Organizing Secretary to his current position. He has a Master's Degree in Zoology. His initiatives for educational reform are well recognized. He believes in inclusiveness having a nationalistic approach and pro-student views. His struggle for affordability, employability, quality education and social justice has earned appreciation and recognition by his associates, seniors, and juniors. In this direction, his visit to China and Russia is remarkable globally. Public diplomacy and people to people initiatives are the strong aspects of his personality.

Today his book is in great need while the philosophy of RSS is questioned from many quarters. I am sure this book is a piece of perfection and is capable to satisfy the queries arising out of contours of Sangh, it's functioning and utility contemporarily. This book deserves welcome in the public domain and author's venture is capable to increase his glory and recognition not only in Sangh rather the world wherein RSS is gaining fame for its virtue, discipline, doctrines, and glory.

Curiosity about the RSS: The RSS is now a public subject with the quest for knowledge about it and the initiatives. There are several books on RSS tracing its background, history, and contributions along with the controversies of which it is engulfed. More curiosity about its functioning and utility has increased in recent days as now Swayamsevaks have occupied the top positions in current governmental organizations.

In this perspective ‘Rashtra’ and ‘Ekatmata’ have become the concepts of attraction for learning and research in our social and political space. Sunil Ambekar deeply analyses the RSS vision and its mission. This book is adding a fresh and vibrant chapter to the available literature of RSS answering to relevant questions dealing with its origin, nature, working in complex society as India has with its diversities- Castes, Languages, Religions, Cultures, Scripts, and Systems, etc.

The ultimate goal: The genesis of RSS functionaries would continue to march on its mission as a Vishwa Guru / World Teacher to provide knowledge and direction to the world. ‘SANGH SAMAJ BANEGA’ is a slogan which refers to a merger of Sangh society. It is raised time and again in the RSS to reinforce the goal when Sangh and society become two in one. One of the most prominent ideologies of the RSS is Pandit Deen Dayal Upadhyay said about it ‘from the past, through the present, to the future’.

The adjective of this book is that it is ‘An Insider’s Account’. The author claims that his association with the RSS is from his childhood. In Nagpur, his family home is situated next to the RSS HQ Hegdewar Bhawan, known as Sangh Building. He regularly attended the Shakha- the fundamental unit of RSS and the place where all Swayamsevaks assemble daily/weekly as per schedule. During holidays the Sangh premises became a playground for school-going children.

There are no membership drives to be a member of the Sangh on its initiative. Everybody was free to become a Swayamsevak at their own will. Since childhood, the author began to understand the teachings of the Sangh and he made conscious efforts to become a ‘Good Swayamsevak’.

Important functionaries used to narrate the real-life stories of great people who served India. He learned Shlokas in Sanskrit. Picnics and winter camps became the source of learning of self-discipline and self-management. The author, being a student of science found the work of Sangh logical and scientific. In every work there no politics and artificiality. A full effort with a pure heart was the operative principle. These noble dimensions of Sangh were very fascinating to the author. 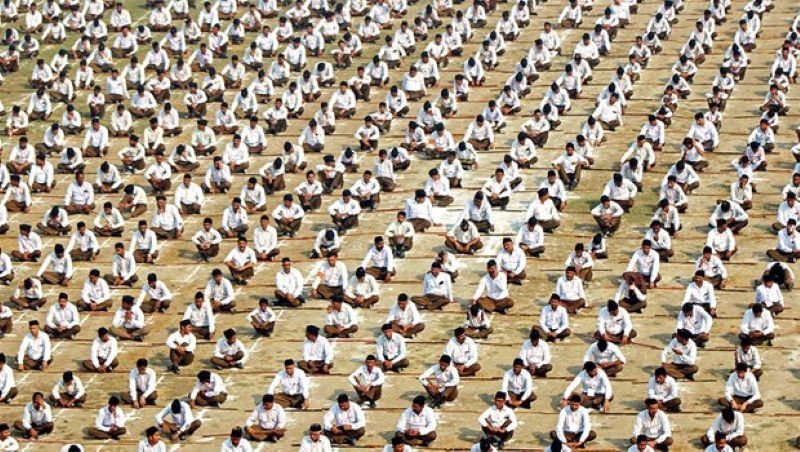 Natural alignment with RSS: Hindu families got natural alignment with RSS because of its spirituality. As a spontaneous daily life, Hindus practiced spirituality. The spiritual cores of RSS constitute “Genuine brotherhood with the people of different faiths”. In this direction, the author recalls such relationships through different programs along with individual and personal relationships.

This reflects the nature of the community relationship that the Sangh enjoys with the people of all faiths. Thus, the learned author refutes the belief spread by a narrow section of our society that the RSS is a communal organization and has come into being only to promote Hindu religion and Hindu culture shutting the door for other castes, communities, and culture.

To refutes this situation candidly he refers the name of different people who are his friends like Cyril Pillai, a Christian from Kerala and Muslim Kaiser Yusuf, who lives in Mumbai. The author from the Sangh used to call him to their house and they come to his home. It was natural and the fact that the author being Swayamsevak was not considered odd.

He gives a pathetic example as when Kaiser’s father passed away, he walked with him and laid Kaiser’s father to rest. “I did everything whatever was required by Islamic traditions in such a situation. It is not normal for me only and also well-accepted fact by the top Sangh functionaries too”.

The Inclusiveness of RSS: The author highlights an event performed in 2016 in Pune titled ‘Shiv Shakti Sangam’ organized by Sangh to contact a maximum number of people from different walks of life cutting across the caste, community, and tradition. Eighteen thousand five hundred fifty-four Swayamsevaks gathered in RSS uniform and many other people from different walks of life came to listen to the Sarsanghchalak.

It was a massive gathering of about 1,58,772 people. The guests who attended the congregation were loud in their praise and their reactions were widely publicized. This program was attended by the family of Mahatma Phule. The Sangh always had a healthy relationship with members of all communities because Sangh’s definition of Hindu is not linked to any religion but to a national identity of India. It is all-inclusive that compasses all communities and faiths.

This is the reason that RSS become an organization of ordinary people and has expanded like a ‘fast-growing scientific chain reaction’. It gives confidence in them that it can bring changes in society and the nation. RSS works bring joy and this is one of the biggest reasons why people like the learned author to stay on as Pracharak and the Swayamsevak for the course of their lives. No advertisement is needed for the purpose. The importance of every individual is acknowledged and conscious efforts are exhausted to link with every individual.

This encourages embracing the Sangh. Its discipline ensures that this diverse formation works and moves together just as the traffic rules ensure that a multitude of navigates its way to the destination. Sangh is known for its clarity as its thought is simply explicit. The Sangh has numerous platforms and each person can find their own space without detaching their existing profession and stations in life. (To be Continued...)