COVID-19: "Herd immunity" will it work for India? 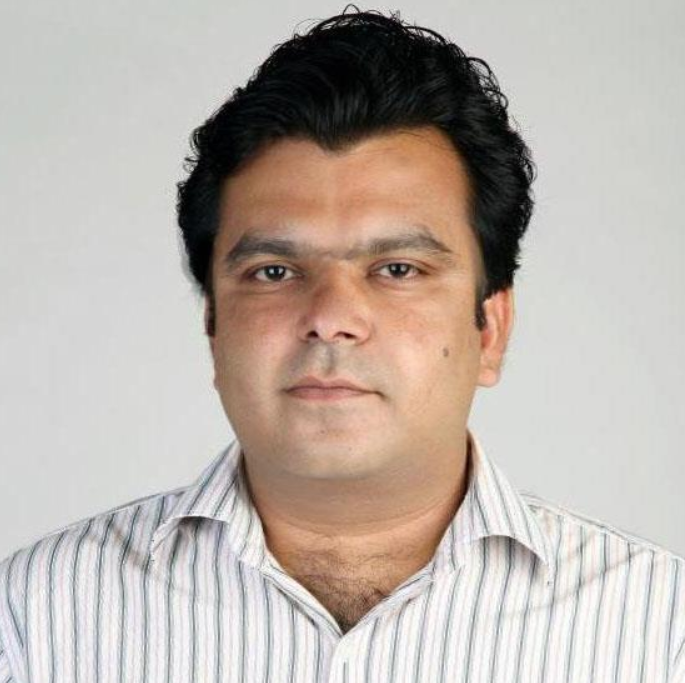 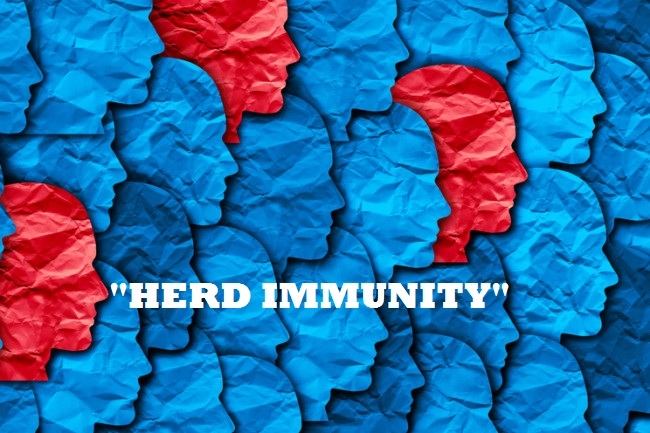 "Sometimes even to live is an act of courage" - Lucius Seneca

2020 is a difficult year; rather a year of survival. We have entered into phase four of lockdown but COVID-19 spread doesn't seem to be stopping any sooner. A vaccine is a far fetched thing and experts are debating over herd immunity. So let's understand what is herd immunity and will it be helpful to India?

What exactly is "HERD IMMUNITY"?:

As word herd suggests, does it mean that we all should get infected and develop immunity towards COVID-19?

So, in brief, Herd Immunity is not about protecting people rather it is about controlling the widespread infection.

To understand this better here is a graph which will help you visualize the herd immunity towards COVID-19. 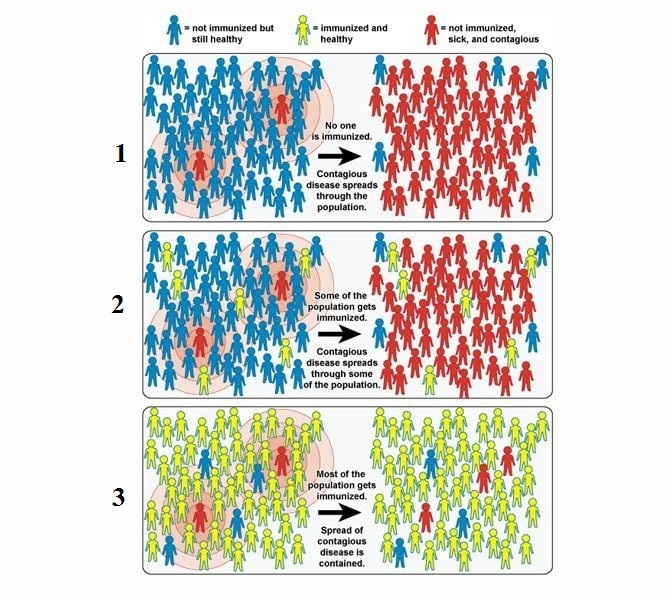 Scenario 1 of the image tells us that most people are healthy but not immunized (blue). The virus starts with infecting few and ultimately results in mass infection (red). Right now, this is what passing across the world and that's why we are under lockdown to control the widespread.

Now if we see scenario 2, Most people are healthy (blue) and few are immunized (yellow). Now because of this few immunized people spread (red) is limited but not controlled.

In the last scenario (3), we can see that most of the population has developed immunity (yellow) and it is also protecting those who are healthy and not immune (blue) therefore outbreak gets controlled and there are fewer cases of infection (red).

Herd immunity is helpful for the most vulnerable part of our population. People above the age of 60, kids and people with diseases. All three of these have low immunity and they are likely to get infected easily.

According to the World Health Organisation (WHO), Older people may get infected and develop more severe symptoms. People with ongoing health conditions, such as; high blood pressure, cardiovascular disease, diabetes, chronic respiratory disease, cancer are most likely to get infected.

So once the certain population is immune to the infection, its ability to spread slows or stops. So the question is, what is the exact number of the immune population we should have to stop the spread and how?

The threshold is the number or percentage of the population which need to get infect to get immunized. This threshold is different for every infection. It depends upon how contiguous the virus is. For example, few viruses are not that contiguous and they need lesser threshold. To explain the threshold for various infections please refer the following chart. 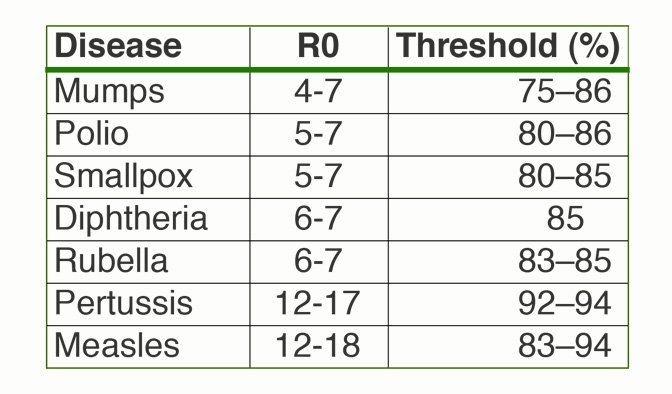 To set a threshold, epidemiologists—experts in infectious disease transmission—use a value called "basic reproduction number," often referred to as "R0." This number represents how many people in an unprotected population one infected person could pass the disease along to. For example, R0 for measles is between 12 and 18, while for polio, it is between five and seven. The higher this number is, the higher the immunity threshold must be to protect the community. Because measles is extremely contagious and can spread through the air, for example, the immunity threshold needed to protect a community is high, at 95%. Diseases like polio, which are a little less contagious, have a lower threshold of —80% to 85%.

Till today scientists couldn't determine what is the threshold of the COVID-19. The data which we need to determine these factors could take years to gather. Assuming the scenario of the highest threshold; we need to know the following things.

How to achieve herd immunity:

There are two ways to achieve this.

The cost of the natural way might devastate humans for a long period. To achieve natural immunity, we might need to wait and let 90% population get infected. The ratio of death could be high. This means 5% to 10% population of the world might get wiped out. Researchers at John Hopkins are very clear about it. The safest way is to get vaccinated and acquire immunity rather than going for a natural way.

COVID-19 is at least 10 times deadlier than normal flu. It has been found that young and healthier people have been hit with serious and fatal cases. That's another reason why natural immunity is dangerous. We still don't know enough about COVID-19 and SARC-COV-2 to know for sure how natural immunity to it works. Researchers are not sure if getting an infection gives you any immunity at all against future infection. It is that we don't have all answers yet and more research/study needed in this direction.

Considering all the facts country like India cant take the chance to go after herd immunity through the natural way. Why?

Let's examine this scenario. To achieve herd immunity through the natural way; we have to hit the threshold of infection. It means 80% of Indians,(100 Cr.) will get infected. This will overwhelm our health system, where would we hospitalize them? Do we have such a robust health system? It has been observed that 3 to 5 % of COVID patients go critical and they need life support. It means 50 to 70 lakh ventilators. We also need to consider the required number of health workers and doctors. The worst part of COVID pandemic is its mortality rate. India may end up losing 5% to 10% (13 Cr.) of its population.

Look at the previous pandemics in India: 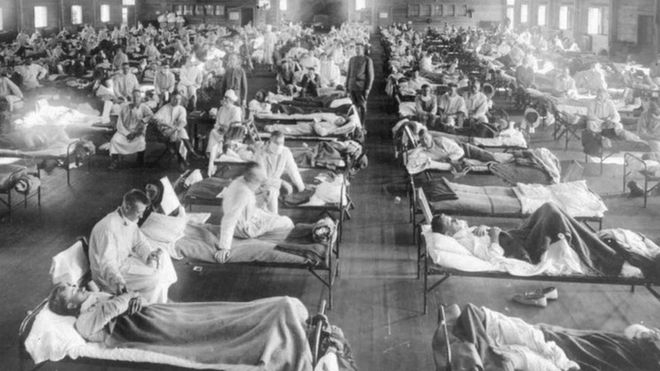 At the time the health system under the British rule was just namesake and limited to some geographical pockets. Lot has improved since but à propos de growth of the population it is nothing. We don't want our newspapers to write again," if you are infected, go to bed and do not worry" why? because we don't have enough beds to hospitalize you. we don't have enough doctors to treat you and we don't have enough ventilators for life support.

Respecting the facts and history, we believe that herd immunity through natural immunity is a big NO-NO for India. Waiting for the vaccine is the right way. As per the researchers at John Hopkins Institute, It may take year or two when a vaccine will be here. Until then social distancing, masks will be new normal. Sometimes even to live is an act of courage.