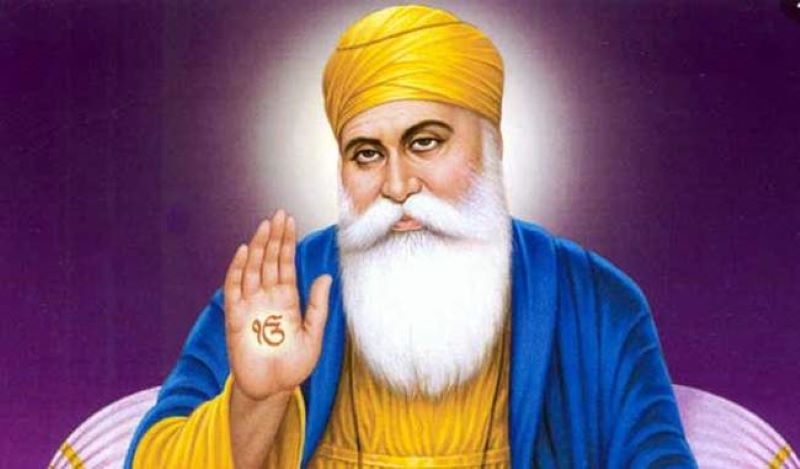 Guru Nanak Devji conceptualized a perfect way of life for humanity which was universal and eternal too. For establishing relations of Atma with Parmatma he told human beings to meditate on the name of the almighty which is known as Naam Japo. To lead an honorable life and to sustain oneself and the family in a conscientious way, he espoused the principle of Kirat Karo.

And to perpetuate feelings and care for fellow human beings he established the tradition of Vand Chhako. Thus, he gave humanity a complete way of life.

Naam Japo: Most of the civilizations agree that there must be one creator who is the cause of the creation.

Guru Nanak Devji had amply thrown light on Creator in his Mool Mantra. He further exhorted humanity to meditate on the name of the creator. It is noteworthy that in all civilizations the creator is known by various names. In Indian culture, also He is known by different names and it is said that He can be attained by treading on any of the pious paths shown by the Guru.

Recitation and or meditation on his name were called Naam Japna by Shri Guru Nanak Devji. According to him, the consciousness which is part of supreme self Parmatma remains in all the creatures created by Him and resides inside the human body to be known as Atma. Naam Japna is a purification process of Atma.

Kirat Karo: The second principle espoused by Shri Guru Nanak Devji is Kirat Karo. That means one should earn the livelihood with honorable means. In Guru Nanak Devji’s time the tendency, of spiritual pursuit by abandoning the world and withdrawal to jungles and hills, was rampant. He emphasized that Grahasth Jeevan (Family life) should be adopted by mankind. And while pursuing spiritual goals one cannot sit idle and conscientious hard work should be done to make both ends meet.

Once he was having a discussion with some mendicants. They said they despised family life and they had dedicated their lives to attain Moksha. For them, Grahasth Jeevan was like shackles in the feet which would inhibit them from treading the path of spiritualism. Guru Nanak Devji told them that they were acting like hypocrites. He asked them why do they go for Bhiksha (Alms) to the same households whom they treated as a burden?

His teachings had a mesmerizing effect on people and there was a resurgence in the contemporary society which was at one hand tormented by the Muslim rulers who had invaded from the foreign lands and left to fend for itself by the confused religious leaders at another. The tenet of Kirat Karo is no different than the theory of Karma. Even after frequent natural calamities like droughts and floods, people were infused with resilience due to the teachings of Shri Guru Nanak Devji and used to rebuild their lives even after facing hardships.

Though Guru Nanak Devji had traveled in all four directions and had influenced people in far off places with his teachings he had spent most of his time in north-west India. Therefore, people living in these areas benefited most from his pious messages and Gurbani. The values percolated down through the generations. In the aftermath of the unfortunate partition of India, millions of people who were uprooted from today’s Pakistan and moved to this side of the border resettled their lives with honor and hard work; the tenet of Kirat Karo was mainly responsible for the spirit of resilience.

Vand Chhako: Earlier two principles of Naam Japo and Kirat Karo was pertaining to man’s relations with the creator and about his individual and family life. The principle of Vand Chhako which when translated, means sharing of one’s resources with the society at large. It is noteworthy that this tenet became the support system of the society in the days when natural calamities like droughts and floods were very common and facilities like transportation were very poor; the means of communication were almost negligible too.

As if these problems were not enough; the rulers were remorseless and were concerned with the collection of revenue from the masses. In the case of calamities, subjects had to fend for themselves and could not expect any aid or succor from the Muslim rulers.

In that background, the golden principle of Vand Chhako became an elixir of life for the masses. Shri Guru Nanak Dev ji institutionalized this principle by starting the tradition of Langar in Gurudwaras. Those who had excess food grains used to come and donate the same in Langar and others who could not manage for their meals used to come and eat in Langar.

The food: The food Served in Langar is known as Prasad. The distribution of food through pious institutions like Gurdwara mitigates the feeling of ego from those who contribute food grains there and wipes out inferiority complexes from those who eat Prasad there. When people give something to Guru’s dwar or take something from there, where is the question of negative feelings like vanity or inferiority?

We have seen this concept of Vand Chhako (Sharing of resources) has always stood by the society in most difficult times. Today, when the whole world is fighting with corona pandemic, the social organizations, imbibing the principle of Vand Chhako, are feeding the needy upholding the values bestowed upon them by Shri Guru Nanak Devji.