Shurpanakha: A Queen or A Cannibal?

Rama, Lakshmana, and Seeta were living in a little cottage by the river Godavari, in the serene forest of Dandaka. The tall, dark and handsome Prince Rama, was chatting with his wife Seeta and younger brother Lakshmana. Then a pot-bellied lady with protruding eyes and long nails came that way and stopped still when she saw the good-looking man. 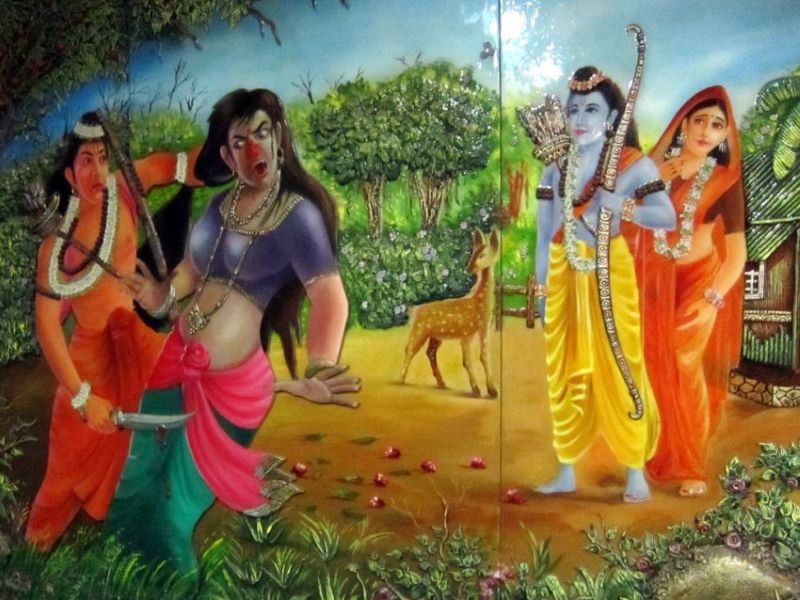 She instantly fell in love Rama! She approached Rama and said, "My name is Shurpanakha. I live in this forest and roam wherever I please. I have highly placed powerful brothers. Know that they have mighty armies." She then unabashedly said, “I confess my love for you and I propose to marry you.”

The young man smiled his enchanting smile, and said,

"I am happily married to my dear wife Seeta, who stands yonder. Oh! honorable one, I don't think you will be happy to be a co-wife.

"Since I cannot marry you, why don't you rather marry my younger brother?" Rama jokingly suggested an option.

Taking it seriously, Shurpankha trotted over to Lakshmana and proposed to marry him instead. Amused by her quick change of heart, Lakshmana said, "I am after all the servant of Rama. If you marry me you too shall be a servant. Why don't you better go back to him with your proposal?"

Shurpankha, with wavering feelings for both men, finally decided to settle for the elder one. But since Rama wouldn't marry her as long as his wife was alive, she said,

“Let me eat this wife of yours, right in front of your eyes. Once she is gone, you will become free from her. Then we both can make merry without the botheration of a co-wife." So saying she rushed towards the wide-eyed terrified Seeta.

Lakshmana saved Seeta by stopping Shurpanakha in her path. He punished Shurpanakha by cutting off her nose.

Shurpanakha then went to seek help from another brother - Ravana. Though he heard her woes, he didn't really give in to her call for revenge. So, Shurpankha said, "Brother, you should seek Rama's beautiful doe-eyed wife. She is fit only for a king like you. You must abduct her, and have her as your wife."

The rest is Ramayana for you.

Feminists today try to paint Shurpankha as a damsel in distress! But the Shurpankha we see in Valmiki Ramayana, is a lady who cannot make up her mind as to whom she should marry. Like a pendulum, her heart goes out to Rama, then to Lakshmana and then back to Rama.

She, who is a cannibal, is ready to devour Seeta. She not only threatens Rama but also sends her brothers to attack him. And when everything fails, she entices Ravana to abduct Rama's wife. What kind of woman is Shurpankha, who unleashes such terror against another woman?

Yet, today's feminist lament at Shurpankha being punished. Change the gender of the people involved in this event, and you will have the same feminists clapping their hands for punishing a man who would not take ‘no’ for an answer.

Then there are some intellectuals try to put forth that Shurpankha was the Queen of Dandaka Forest. In Valmiki Ramayana, Rama himself tells the qualities of a King (or a Queen) to Bharata. He asks Bharata who has come to meet him at Chitrakuta the following questions – Bharata, protecting the people of the state is the duty of the king. Are you protecting your subjects? Are you protecting the womenfolk in the state? Tell me, if you are protecting the farmers, the herdsmen, and those who study the Vedas? Are you also protecting the animals in your kingdom?

Shurpanakha, whom some call the ‘Queen’ of Dandaka is not carrying out the above duties.

Rama, who has been expelled from his state, was in the Danaka forest as a refugee. Shurpanakha, as the ‘Queen’ of Dandaka, should have given shelter to these three helpless people. While she says she had two generals and a large army at hand, she should have said to the trio, "I will protect you. Stay here until your exile is over!"

But instead of providing them protection, she sought to exploit their helplessness. First, she warned Rama of dire consequences and proposed marriage. When he refused to marry her, she threatened to eat Seeta. And when he still refused, she sent an army to kill him.

So, what do you think? Who is Shurpanakha? A Queen or a Cannibal?