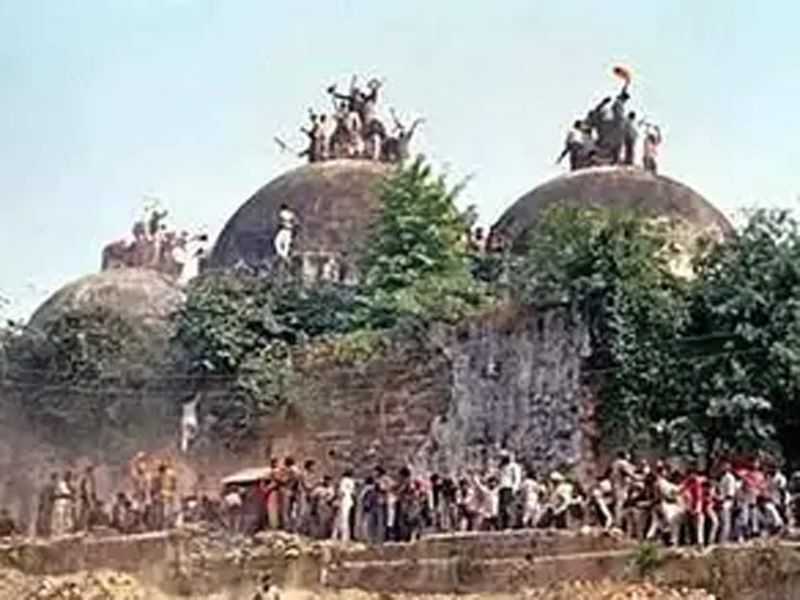 Mir Banki, a general in Mughal invader Babur was born in Tashkent. He came to Bharat in 1526 along with Babur and was sent on a military expedition at Chanderi in Mo and from there to Awadh after the battle of Panipat which Babur had won.

Three mosques were constructed at the orders from Babur. Amongst them, one was in Sambhal (UP), one in Panipat (Haryana), and the third one was built at Ayodhya.

The mosque at Ayodhya was built by demolishing a temple of Ramkot in 1528. The Hindus since eons believed that the platform was the birthplace of Sri Ram. Therefore, initially, that mosque was named ‘Masjid – e – Janmasthan’ and it is recorded in all the historic documents by this name only.

Babur died in 1530. However, the tussle between the Hindus and Muslims over the temple and the mosque continued. Later Aurangzeb demolished the fort of Ramkot. Both the British and th4e Mughal historians have mentioned in detail about the disputed place extensively. Some historians were of the opinion that the mosque at Ayodhya was built by Aurangzeb and not Babur. However, all of them believed that the mosque was built after the demolition of the temple.

In 1853, the armed sadhus belonging to the Nirmohi Akhara launched a campaign and captured this place. The conflict continued for a couple of years. Finally, the administration intervened and banned any activity of constructing a temple or performing puja. In 1855, another bloody conflict erupted following which a wall was constructed there. On the one side of the wall, the Muslims used to offer namaz while the Hindus performed puja of Sri Ram at the Ram Chabutara on the other side.

The Hindus tried to construct a temple at Ram Chabutara in 1883 which was vehemently opposed by the Muslims. Following the dispute, the Deputy Commissioner in 1885 banned temple construction. The pujari of Ram Chabutara Mahant Raghubar Das filed a case in the Faizabad court. Against this, the Muslim party too went to the court claiming the entire land for the mosque. The court did not entertain the claim.

The Muslim party moved the higher court against this decision. But the British judge there also upheld the lower court verdict. The judge mentioned clearly that the mosque was built on the place revered by the Hindus. But since it was too late to change history, the status quo should be maintained.

In 1934, there was a riot at Shahajahanpur near Ayodhya due to cow slaughter. It had its repercussion in Ayodhya also and the Hindu-Muslim riot that followed, the wall encompassing the mosque was demolished and one of the tombs was also damaged. These were repaired by the then British government later.

However, the Shia community raised objections over handing over the area to the Sunni Waqf Board. Their argument was Mir Banki was a Shia, therefore, this mosque belonged to the Shia community. The Waqf Commissioner heard this case and delivered the justice in favor of the Sunni Waqf Board because Babur was a Sunni who made this mosque. The Shia Central Waqf Board appealed against this judgment but the higher court in its 1946 verdict ruled in favor of the Sunnis.

After Independence, in 1949 Akhil Bharatiya Ramayan Mahasabha organized a nine-day ‘Akhand Ramayan Path’ outside the mosque. At the end of this program, it was said that the idols of Sri Ram and Sita suddenly appeared inside the mosque. Thousands of devotees thronged the place to have ‘darshan’ of the Lord. Fearing clash, the then Nehru government declared the place as ‘disputed’ ad put a lock on the gates of the mosque. Nehru asked UP Chief Minister Govind Vallabh Pant and Home Minister Lal Bahadur Shastri to get the idols removed from the place. But the Faizabad Deputy Commissioner KK Nair expressed his inability fearing largescale riots and the idols remained there.

After some time, one Gopal Singh Visharad moved the Faizabad court seeking permission for Hindus to perform puja of Sri Ram and Sita. In 1050 the Nirmohi Akhara too submitted a petition in the court claiming the ownership of the entire land followed by a Sunni Waqf Board plea in 1961.

In 1984 the Vishwa Hindu Parishad (VHP) launched a massive public awareness campaign on the Ramjanmabhumi issue. The Rathyatra proposed was somehow kept in abeyance due to the murder of the then Prime Minister Indira Gandhi in the same year.

After Indira’s demise, her son Rajiv became the Prime Minister. In order to placate the Muslim voters, he overturned the Supreme Court judgment in the Shahbano case. But fearing the loss of Hindu votes, he allowed the lock at Ramjanmabhumi premises to be opened and permission was granted to the Hindus to perform puja.

By doing this, Rajiv once again underlined the stark communal character of the Congress party.

The VHP was given permission to perform Kar Seva and shilanyas in 1989 at Ayodhya. However, to counter the surge of Hindutva, the then V P Singh government came out with the implementation of Mandal Commission recommendations. The BJP sensed the inherent divisive character of the recommendations and launched the Somnath-Ayodhya Rathyatra led by Sri Lal Krishna Advani.

The yatra was, however, stopped in Bihar by the state chief minister Lalu Prasad Yadav who also arrested Advani. Following this, the BJP withdrew the support to the V P Singh government leading to its fall. Prime Minister V P Singh treading the communal line of Rajiv Gandhi said that he was sacrificing his government to save the Babri Masjid.

In 1991, there was another karseva at Ayodhya when UP chief minister Mulayam Singh Yadav fired at the Karsevakas. Hundreds of unarmed karsevaks were killed in this firing. The media tried to bury this news but the local and international media raised this issue. Mulayam Singh Yadav again towed the same communal line and justified the firing to save the Babri Masjid. 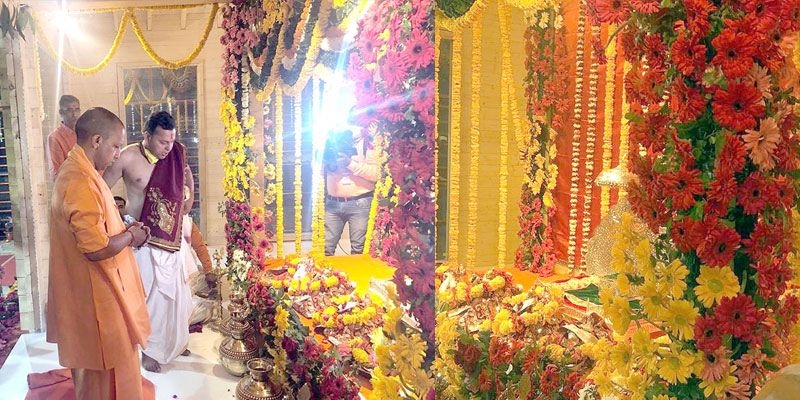 In reaction to this, the VHP organized a massive karseva on December 6, 1992, where the anguished karsevaks demolished the three tombs of the mosque and established a makeshift Ram temple at the spot.

This incident evoked violent reactions from Pakistan to Bangladesh. In Mumbai, Dawood Ibrahim and his gang indulged in serial bomb blasts killing hundreds of innocent people. The most branded secular leader Sharad Pawar was the chief minister of the state then.

In 2003, the Archaeological Survey of India (ASI) started excavation at the Ram Temple site on the orders from the court. To their surprise, they recovered remnants of an ancient temple during the excavation endorsing the presence of a temple at the site of the so-called mosque. The ASI gathered and presented 1360 pieces of evidence to prove its findings. The Muslims as expected opposed and negated the pieces of evidence but the Allahabad High Court validated the ASI report. 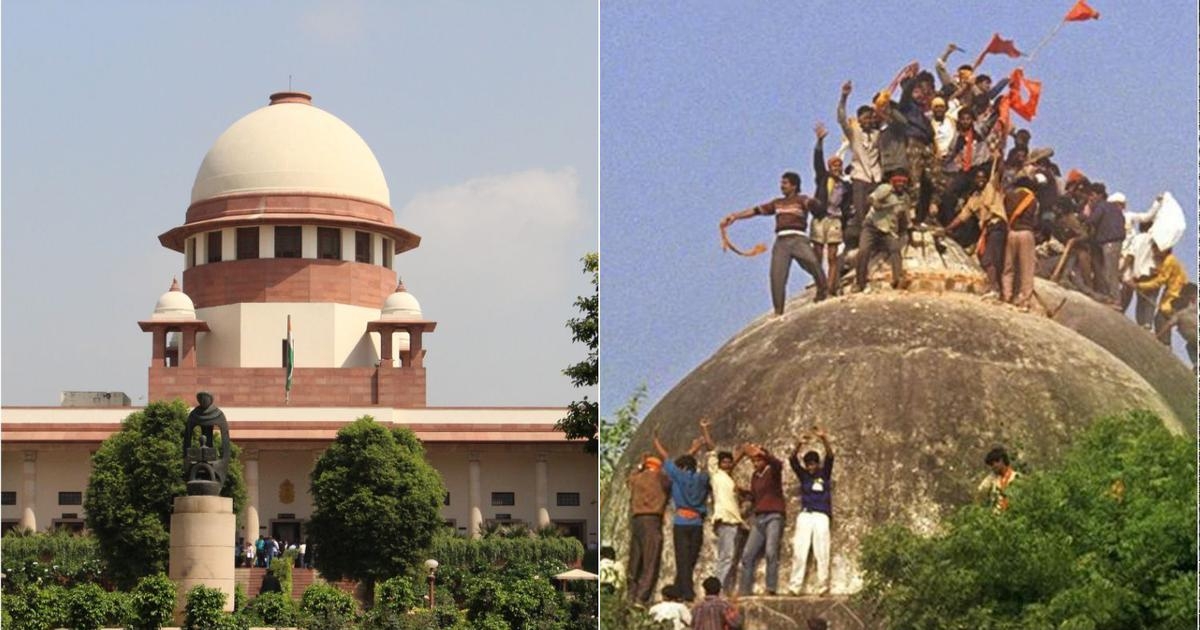 The aggrieved parties approached the Supreme Court against this High Court verdict. The five-judge bench of the apex court heard the petition from August to October 2019 and announced its verdict on November 9, 2019. The historic judgment clearly said that the entire land should be given to a trust to be formed for the construction of the temple and the Sunni Waqf Board be given a five-acre plot for constructing a mosque.

Thus, the 493-year-old battle over Ramjanmsthan was won by the Hindus with this verdict of the Supreme Court. The Muslims and Hindus accepted this verdict with folded hands and without making any adverse comments.

On the 5th of August 2020, the foundation of the grand, magnificent Sri Ram Mandir would be laid by Prime Minister Narendra Modi in presence of selected gathering at Ayodhya. Preparations for this festival are going on a war footing. The VHP has appealed to the entire society to celebrate this day by lighting lamps at their houses and decorating the temples in their vicinity keeping in view the norms of the coronavirus pandemic.