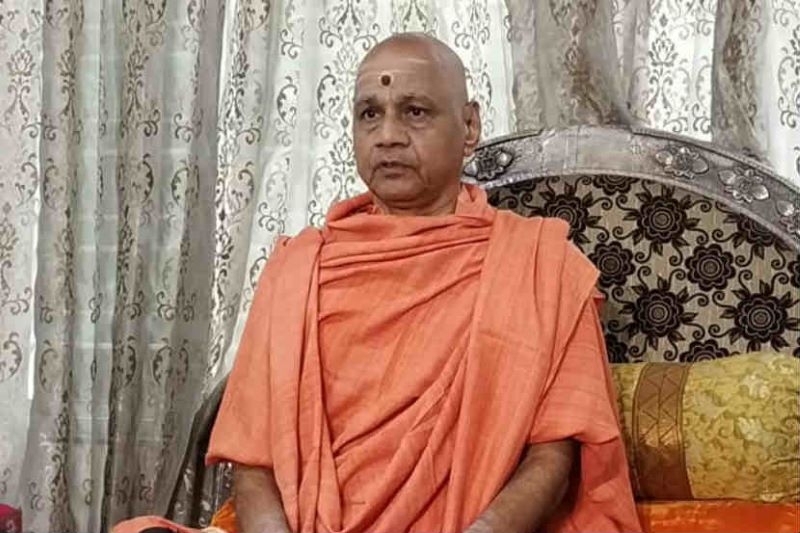 Mumbai, July 31: Reconstruction of Sri Ram Mandir at Ayodhya the birthplace of Sri Ram is a positive effort to reawaken our national consciousness. It is the national celebration of erasing the scars of insult heaped on our society by the invaders, said Swami Govinddev Giri, treasurer of Sri Ramjanmasthan Teerthkshetra Trust.

In an interview to Marathi weekly ‘Vivek’ here he spoke on a number of aspects related to the Ram Mandir movement and contribution of the Hindu society towards the rejuvenation of the temple at Sri Rama’s birthplace. His interview came against the background of the proposed foundation laying ceremony of the Ram Mandir at Ayodhya slated for August 5, 2020, at the hands of Prime Minister Narendra Modi.

A number of secular leaders like NCP Supremo Sharad Pawar, Maharashtra Chief Minister Uddhav Thackeray, and AIMIM President Asaduddin Owaisi have taken exception to Prime Minister Modi’s visit and participation in the bhumipujan ceremony of the proposed temple describing it as a violation of the principle of secularism enshrined in the Constitution.

Secularism in India has become synonymous with demeaning the Hindu society that forms the backbone of this nation; insulting their national heroes, insulting their ideals and places of reverence, etc. There are certain schools that abhor the rise and consolidation of Hindus. They go to the extent of insulting the Hindus in the name of secularism. This is not true secularism. True secularism should be what Lal Krishna Advani said ‘Positive Secularism’ that is it should not be construed as negating the religion in the place of equality towards all religions.

The construction of Ram Mandir is not just a religious issue. It is beyond that; it is the rejuvenation of the structures destroyed by the invaders' hundreds of years ago. It is the reawakening of our national consciousness and celebration of erasing the scars of insults heaped on us by these invaders, Swami Govinddev Giri emphatically said.

Expressing his feelings and emotions at this stage of fulfillment of the century-old dream coming to true Swami Govinddev Giri said that the history of the Hindus was wrongly interpreted as a history of defeats. But this was not the reality. We have to engage in the continuous struggle for nearly five centuries for the temple at Sri Ram Janmabhumi. The struggle started in 1528 when the temple was demolished to construct a mosque continued till November 9, 2019, when the Supreme Court handed over the site to Hindus.

Against the background of this centuries-old struggle, this is the golden moment heralding an era of confidence of the Hindu society. As Swami Vivekananda said, Mother Bharat is awakening and now she is announcing to the world that the future belonged to the Hindus.

In my opinion, the August 5 program is not just a groundbreaking of a temple; it is the moment of the reawakening of our national consciousness and confidence. Therefore, this is the Red-Letter Day in the history of our nation, he said with beaming confidence.

Stating that the temple in Ayodhya would be an inspiration point for the entire humanity, Swami Govinddev Giri said that Sri Ram belonged to the entire human race and not any particular religion or sect. Many adore him as a great human being, a great teacher of humanity. Each section of the society has identified itself with Sri Ram in one way or the other. He fought with the demons by organizing the common masses and established the supremacy of truth.

Giving details of the proposed temple and its construction, he said that in view of the changes according to times the height of the temple will be 161 ft. and it will have five ‘shikhars’. The design would be the same as decided by the Kanchi Shankaracharya, Devraha Baba, Mahant Avaidyanath, and Ashokji Singhal at the Prayagraj Kumbha.

The work was prolonged due to coronavirus pandemic. Had there been no Covid-19, the program of August 5 would have been no less than a Kumbha Mela. But to expedite the construction of the temple, we have decided to hold this program during the Covid-19, he said expressing happiness over Prime Minister accepting the invitation.

Planning is afoot to contact over six crore families after the Coronavirus pandemic is over. This will be done to achieve the direct contribution of the common people who can donate a minimum of Rs. 10/- for the temple construction. The development of the Mandir premises will also be done by public donation. The construction of the temple could be completed in three years according to the experts.

In view of the corona situation and to avoid crowds, the Trust has invited very limited persons for this celebration. We have not invited any chief minister. However, the chief minister, governor, MPs, MLAs, and Vice-chancellors of Uttar Pradesh will be present. Besides, former deputy prime minister Lal Krishna Advani, former union minister Dr. Murli Manohar Joshi, and BJP National President J P Nadda are invited for this program, he said.

Giving details of the August 5 program he said that Prime Minister Narendra Modi will be visiting the Hanumangarhi temple to have ‘darshan’ of Sri Hanuman and reach the temple site at 12.15 pm. He will have ‘darshan’ of ‘Sri Ram Lala’ at the makeshift temple, plant a sapling there and then perform the main puja till 12.30 pm. This puja will be over exactly at 12.44 pm when the ‘Sankalp’ for the ‘Pratishthapana’ will be completed.

After the completion of this puja, Prime Minister Modi will address the nation, extend best wishes for this work. Some other speakers including UP Chief Minister Yogi Adityanath, RSS Sarsanghchalak Dr. Mohanrao Bhagwat will also be delivering their messages. President of the Trust Mahant Nrityagopal Dal will also be expressing on behalf of the trust.

Underlining the importance of this event in the history of Independent Bharat, Swami Govinddev Giri said that as in case of Somnath Mandir rejuvenation the then Prime Minister Jawaharlal Nehru raised objections over President going to inaugurate the temple, so some secularists today are also raising same objections over Prime Minister Modi attending this ceremony.