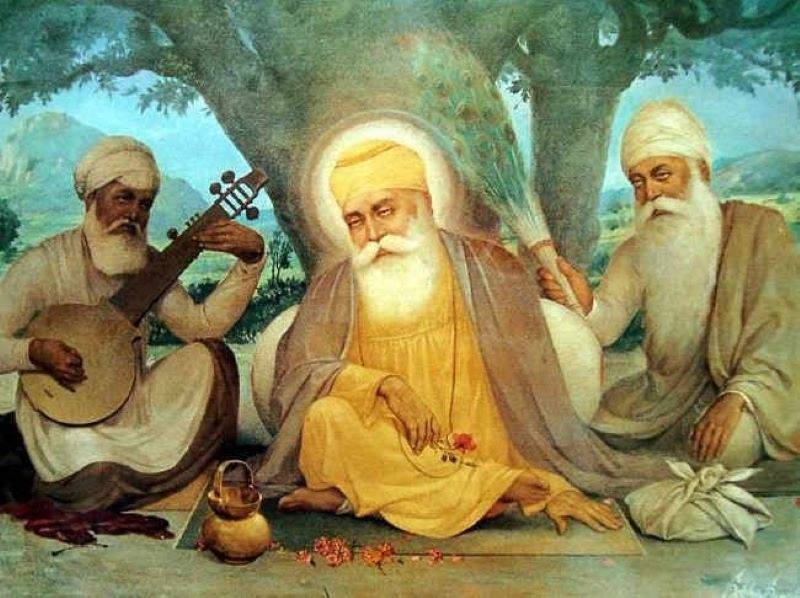 One of his verses summarizes his entire approach towards the traditional schools of knowledge being followed in contemporary India and their practical aspects. It goes like this......

He says all four Vedas are truthful but they have to be properly studied and understood. He lamented that people do read Vedas but act contrary to the teachings written in the scriptures.

He was against the hypocrisy of the people who presented themselves as the knowers of the holy books but were discriminatory in their behavior towards lower sections of the society. Nowhere in his sermons Sri Guru Nanak Devji has questioned the traditional Bharatiya knowledge but contradicted vehemently its wrong interpretation.

There is one incident that happened in his life while he was nine years old. His parents wanted to do his Janeu (Sacred thread) sanskar which is a religious practice among Hindus. He declined to go through the said ritual because he had been witnessing many people wearing the Janeu but at the same time their actions were not in the interest of the society. He told them that by wearing Janeu you pretend to be pious but at the same time discriminate against the people in the name of caste.

He said that I will rather wear a sacred thread whose cotton is compassion; satisfaction is thread and truth is the twist. What beautiful description of Janeu he has made! Here he has been emphasizing on the righteous conduct which can be achieved with or without wearing a Janeu.

One has to remain mindful of the social condition of that time. Society had been facing multiple issues on account of the disappearance of local rule and perpetuation of the rule of foreign invaders in its place. Islamic rulers had wreaked havoc on local educational institutions; centers of spiritual training too had not been spared. One can give an example of Takshashila university. It had been a center of learning for centuries; not only students from nook and corner of India had been coming there, but learners from the entire world had also been coming there to gain knowledge.

The said university was decimated as the universities of Nalanda and Vikramshila too had been destroyed by the invading foreign armies. Our Gurukul system too was at the receiving end of the foreigners’ atrocities. The reformation mechanism which used to weed out obsolete ideas and practices from the society was in disarray due to strikes on our centers of knowledge.

The learned people on whose shoulders lied the responsibility to guide the society in such turbulent times were themselves confused and bewildered. Some of them chose to become subservient to the Islamic rulers and started learning Persian language so that they could find jobs in the royal courts. Some others tried to find places in the armies of the alien rulers and became mute spectators to the excesses which were committed against their own countrymen.

Those in pursuit of spiritual fulfillment completely renounced the society and went to jungles and hills for meditation. Society was left to fend for itself; on one hand ruthless invaders were heaping atrocities and on another, its own sons were shirking away from their duties.

In that period Sri Guru Nanak Devji was born and took the cudgels upon himself to root out obscurantist ideas from Bhartiya society. He criticized those individuals who used to wear robes of seers but were acting contrary to the interests of the society. Bhai Gurdasji, the respected and renowned chronicler of events of Guru Nanak Dev Ji’s life and first scribe of Guru Granth Sahib, writes about Guruji in this way... सतगुरु नानक परगटेया मिटी धुंद जग चानन होआ ।।

It means that a lot of fog had enveloped the society and with the emergence of true Guru Nanakenlightenment took place.

After his travels to far and wide places to sermonize people, Sri Guru Nanak Devji established a town called Kartarpur where he had started the tradition of Langar. In one of the nearby towns called Achal Batala, he had gone to do Kirtan and spread his message of humanity. There, already some Siddh yogis were having some religious discourses. They requested Guruji to have a debate with them on his teachings.

During the debate, Siddh Yogis denounced the Grahasth jivan (Family life) and said they have renounced the same for the sake of spiritual pursuit. Guru Nanak Devji countered them and said on one hand you criticize Grahasth and on another, you go and beg from the same house whom you denigrate.

He had been critical of the hypocritical attitudes of people who had become ascetics but were doing no good to society Sri Guru Nanak Devji had simplified the traditional Bharatiya knowledge in such a way that even ordinary people could understand it. In Japuji sahib he says,..

He has presented Bhagwad Geeta’s Karma Siddhant in front of people in their local languages and he conveyed that everybody will get results, good or bad, in accordance with his deeds. Besides, he says Atma which resides inside the human body always guides one to perform good deeds.

Traditional Shastras have established four categories of Purusharthas or Karma; they are Dharma, Artha, Kaam, and Moksha. Sri Guru Nanak Devji elaborates on it...

He says, those who want to achieve the four Purusharthas can do so by serving the pious and saintly people and if they want to alleviate their miseries, they should meditate on Prabhu’s name conscientiously.

Truly, Sri Guru Nanak Devji endeavored to take Bhartiya Gyan to each and every household of Bharat and even to far off lands of Arabia.