This crisis of identity is the gift of Left thought copied from the West, and its solution lies in our Bharatiya philosophy.

Ratan Sharda
Total Views |
I am one of the earliest critics of lumping together all Left Wing critics as Right Wing, or all individuals and organisations opposing Marxist world view as Right Wing. The need to discuss whether all those opposed to Left be called Right. Yes we are right but we can’t all be Right Wing. I heard my dear friend Abhijit Iyer Mitra on a YouTube chiding people for calling themselves non-Left rather than Right Wing. I respect Abhijit for his sharp intellect and unapologetic responses to various issues. We differ on many issues, but like ‘right’ thinking people we agree to disagree with respect.
While Left has cornered itself into a corner with exclusivist illiberal ideas that are as close as to exclusivist illiberal Abrahamic religions and has come to resemble a cult; the field of non-Left view points is vast and open, like an open umbrella that has many different ideas that are not frozen or closed. You can’t bunch them together as Right Wing. It is a western construct based on economic thinking later enlarged to include extremist intolerant religious groups. 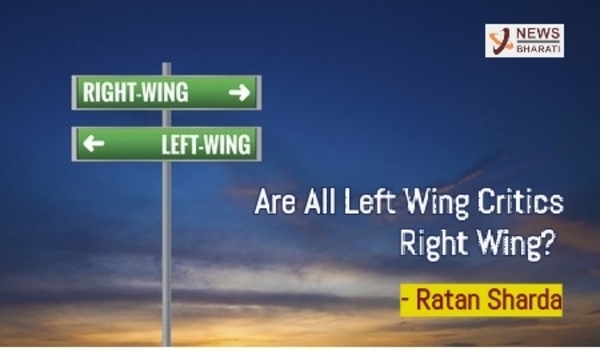 We people of Dharma/Indic/Bharatiya/Hindu view point don’t fit into this classification. We may have to coin a new terminology to explain our more complex approach to life and social issues. There are true Right Wing like Abhijit and Anand Ranganathan, who are against any state intervention, or idea of welfare state and classical economic policies. By this definition they are also liberals, but if they are labelled as Right Wing, they can’t be liberal as that label has been appropriated by illiberal west for which any other idea except there is an anathema. On cultural issues they are close to Dharmic or Indic civilisational values that respect all view points, and let people be as they are. Most liberal stand point. But, Abrahamics have a set behaviour pattern for human beings and those who don’t follow that pattern are heretics or Kafirs or apostates.
Can an Indian believing in Bharatiya culture be clubbed with extremist Islamist or Ku Klux Klan type of organisations? Definitely no. But, this is what will happen if people like Abhijit call themselves Right Wing. Mixing up of cultural/religious ideologies with typical economic Right can create such a confusion and a negative resonance about Indian Right Wing because culturally and religiously we Indians are the most liberal and republican. Therefore, many rooted Indians use a term like Indic or Dharmic – which is not a religious term but a civilisational one. Dharmic is basically a life based on ethical values, rule of law, balance between duties and rights.
Thus, cultural and economics can’t be bracketed together in Left or Right dichotomy. Economic philosophy derived from ancient thinking of Hindu economics and as propagated by RSS is not typical Right. It does not propagate minimal controls limited to only securing rights through laws to protect a citizen’s right to livelihood or carry on business or industry. It does not believe in survival of the fittest. It does believe in free enterprise but linked welfare of the citizens. It talks of uplifting the poorest, the last person in the queue, with state intervention if required. PM Modi’s economic policies clearly reflect this thinking. His focus has been to uplift the poorest from their deprived life and give them a chance of dignified life. Only a person with dignified life can think of bigger things for self the society.
Integral Humanist philosophy presented by Deendayal Upadhyay who was an RSS prachaarak and built-up Bharatiya Jan Sangh (the forerunner of BJP) states that a human being as a bundle of material and physical desire, but an individual that also requires spiritual fulfilment. To put it in ‘archaic’ language – not just artha and kama but both guided by Dharma to attain the ultimate aim of moksha or nirvana. Even if an atheist doesn’t believe in nirvana or moksha, he/she does believe in the concept of dharma guiding our behaviour in social and economic sphere. This philosophy talks of serving and uplifting the last person in the queue termed ‘Antyoday’. Infact, RSS leaders Shri Guruji and Deendayal Upadhyay go to the extent of saying that right to property can’t be absolute. So, State has a proactive role in guiding the economics of a nation, unlike capitalist theory. Thus, we find that Economic policy of a Hindutva believer or Integral Humanist philosophy is not rightist.
In the Left Wing -Right Wing dichotomy, where does a thinker leader like Ram Manohar Lohia fit? He was a committed socialist rooted in Bharat. But, he was a believer in Dharma and Hindu culture. He believed that Bhagwan Ram was the uniting spirit of Bharat and initiated Ram Mela in Chitrakoot, the historic place in Ramayan where Ram stayed during his stay in forests. He used Ram, Krishna, Shiva in his discourses. Does that box him into Right Wing?
So, we have so-called right-wingers propagating left economic policies though their context and reference points are Bharatiya, not West. And so-called left wingers closely associating themselves with cultural roots of Bharat or Hindu religion, if you may say so, that should label them as right wing as per conventional thinking. Similarly, we have professed leftists aligning with a faith like Islam that has no place for deviant behaviour in terms of gender and the penalty for this deviation is death. Thus, liberalism dies unsung death in this alliance of convenience and right wing Islam gets a place on the table with left wing. Western conservative parties are the finest example of right wing economics and are generally allied with the Church. So, the conventional right wing defines them well, because Church is right-wing. This is not true of a political party like BJP or a cultural organization like RSS. At the same time Church is referred to as liberal by Indian left it is though it is intolerant of all other faiths, but Hindutva is termed illiberal and intolerant though by the very fundamentals it is pluralist and gives respectful space to other faiths. Opposition is to conversion because conversions uproots the converts from their culture roots. We have seen this in tribal belts and in North East. The unrest in tribal societies in the North East Region is the result of alienation with the old native culture.I think, more discussions and debates are required on the idea of Left Wing and Right Wing in India with Bharatiya context. It will bring in more intellectual clarity in India that is Bharat. The confusion began at the time of identifying our country as India though it was identified as Bharat for eons. It is a pity that even after 75 years of our independence, we are debating whether we are India born on 15th August 1947 or Bharat that exists more than 10000 years as per documentation and history that we understand and accept as of today. It may be older as more scientific evidence is understood by us. This crisis of identity is the gift of Left thought copied from the West, and its solution lies in our Bharatiya philosophy.