Rani-Ki-Vav is an 11th century step well built in Patan, Gujarat, right on the banks of the river Saraswati, by queen Udayamati herself

Most of us live in a "bubble" believing that women in ancient times were suited only in the kitchen, especially in India, as they are incapable to do other things. However, most are unaware of the untold stories that women were very much active in many other fields, even back in the day. Similarly, one such "bubble" bursts when one gets to know about the tale of 'Rani ki Vav'. 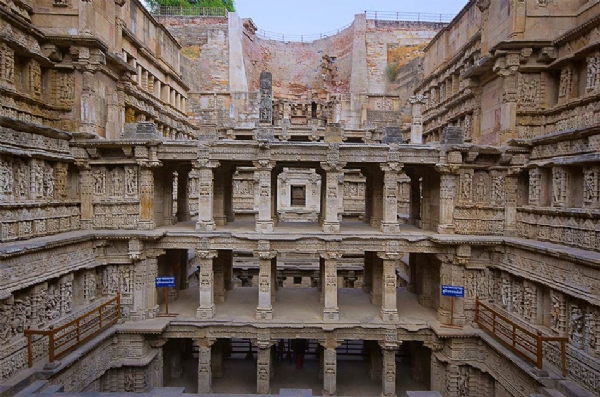 Rani-Ki-Vav is an 11th century step well which was built in the town of Patan, in Gujarat, right on the banks of the river Saraswati. The unique factor about this step-well is that it has been built by the queen Udayamati herself. She was the widowed queen of Bhimdev, (AD 1022 to 1603) about 1050 AD, in the memory of the king. Bhimdev I was the son of Mularaja - the founder of the Solanki dynasty of Anahilwada Patan.
In 13th century, geotectonic shifts lead to a huge flood, and disappearance of Saraswati river. Subsequently, the stepwell could no longer function as a water well. It buried the property under layers of slit for almost 7 centuries. It was the silt which the flood carried during this event, which allowed for the preservation of Rani-ki-Vav, until it was discovered around 30 years ago.
A look into the well - The steps of the well lead down through several levels with lines of the carved pillars and over 800 sculptures. These are majorly based on the Vishnu-avatar themes, along with some detailed geometric patterns. The stepwell is made in the form of an inverted temple. It showcases the superior craftsmanship of the era, and their one-of-a-kind architectural style. The sculptures in here are similar to those in the Vimalavasahi temple in Mount Abu.
This step-well is the only tangible thing which proves the former glory which once the Patan’s had. This beautiful step-well is one of the oldest and most finely built ones in India, and one that has been preserved extremely well. Step-wells are a prominent form of underground water resources, and storage systems in India - and have been constructed since the 3rd millennium BC. They evolved over time, from what used to basically be a pit in the soil, towards elaborate works of art and architecture.

Rani-ki-Vav was built at a period in time when craftsmen were the finest at their stepwell construction ability. The Maru-Gurjara architectural style reflects the mastery of this complex technique, and great beauty in detail and proportions. The stepwell is now considered as the most glorious one among the stepwells in India. Chand Baori, in Rajasthan, is another apt example of such craftsmanship. 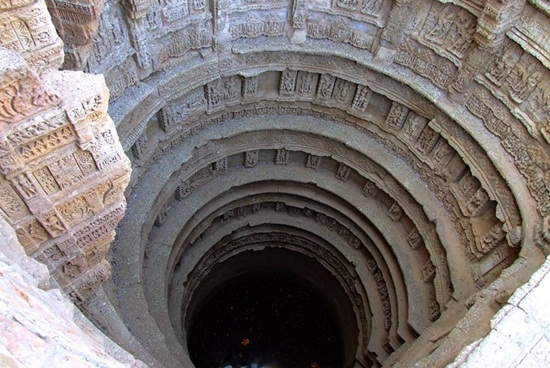 There exist more than 500 main sculptures here, and over 1000 smaller ones, which have religious, mythological and secular imagery depicted. The sculptures often reference several literary works. The 4th level of the well is the deepest, leading into a rectangle tank - 9.5 m by 9.4 m, at a depth of 23 m. The well is located at the westernmost end of the property and consists of a shaft 10 m in diameter and 30 m deep. The building is of 64 m by 20 m.
Below the last step of the well, there exists a gate which leads to a 30 km long tunnel that opens at the town of Sidhpur, near Patan. This tunnel was built as an escape gateway that could be used by the king during wars. The tunnel is now blocked by stones and mud. A composition by a Jain monk named Merutunga, mentions that queen Udayamati, who was daughter to Naravaraha Khangara, constructed this stepwell in Patan. The same composition also mentions that the stepwell was being built back in 1063, and was finished 20 years later.

Also Read | Balkrishna Doshi receives the Royal Gold Medal 2022, the world’s highest honor for architecture
Archaeologists Henry Cousens and James Burgess paid a visit to the stepwell back in the 1890s when it was fully buried under silt. Then, only the shaft and some pillars of it were visible. The stepwell was rediscovered in 1940s, and the Archeological Survey of India restored it in the 1980s. This outstanding stepwell has been listed as one of UNESCO’s World Heritage Sites in 2014
Rani-Ki-Vav Patan Gujarat Rani Udayamati architecture