It is built in the Jain style of architecture, and the sculptures with intricate design resemble the ancient historic temples of Karnataka

The Tambdi Surla Mahadev temple, which is surrounded entirely by forest land, is said to be the oldest temple in Goa. As per some of the historical records, this temple was established in the 12th century by a minister of the Yadava King Ramachandra. 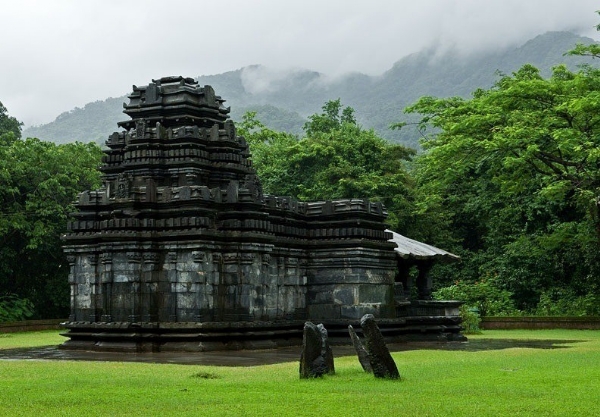 What sets the temple apart: In the 14th century, the Delhi Sultanate invaded Goa. The Sultan’s army was on an expedition to South India. On their way, they destroyed Goa, which was then under the Kadamba rulers. Subsequently, Portuguese rule was established in 1510. They too, brought destruction to the state. Several structures pre-dating Portuguese rule were destroyed by Portuguese regime. In 1541, idol worship was forbidden in the Portuguese colony in Goa. More than 350 temples were destroyed by Portuguese soldiers. It was officially declared that being a believer of any religion other than Roman Catholicism was forbidden for residents of Goa. But owing to its secluded location, the temple was able to survive the attacks of these regimes, through the centuries.
Apart from the Hindu temples in Goa, there isn’t any kind of a trace of any historical monument in the state currently, which sets Tambdi Surla apart from everywhere else. The fact that the Mahadev temple managed to survive through the centuries for this long, is truly remarkable.
Even if this temple was built in the Jain architecture style, it is dedicated to Lord Shiva. Therefore, this temple is of a great cultural as well as religious significance. This temple is situated right amidst of lush green vegetation, and has a serene aura. It is secluded from the usual bustle of tourists which is seen in a lot of places in Goa.
While exploring the beauty in the form of this temple, the peaceful environment here will leave you mesmerized. Even though it is visited by many tourists throughout the year, this pristine temple still remains to be an unknown destination amongst many.

This ancient monument is now a protected heritage site. It is considered as the most ancient temple of Goa, which was actually built far away from the places where civilisation was emerging. 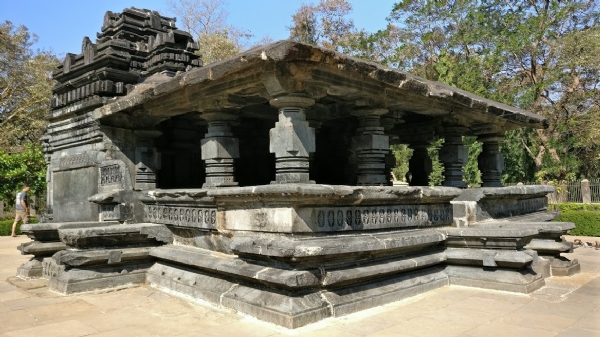 It is built in the Jain style of architecture, and the sculptures with intricate design resemble the ancient historic temples of Karnataka, also built by the Kadambas – a major empire that ruled in these provinces. The temple is the only surviving relic of the era.
According to history researcher Prajal Sakhardande, the temple was built in the 12th century by the Kadamba queen Kamladevi and is not made of basalt, as largely believed, but instead, of grey black talc chlorite schist soap stone. But the records which do say that it is built out of black basalt stone, also say that the stone was sourced from the Deccan Plateau, which was said to be the treasure house of precious minerals during that time period.
Also Read | Rani ki Vav - A flamboyant architecture built by Rani Udayamati in the 11th century
The actual temple area is relatively small, and the top portion of the temple was never actually built. This ornate temple faces the east – which is a sacred direction for temples to receive the first rays of the sun.
Inside the temple, a statue of a headless Nandi stands inside the corridor, which is surrounded by stone planks all on sides, with a pillared hall in its centre. On each side of the exterior walls of the central chamber of the temple, some intricately carved images of the Holy trinity of Indian mythology: Brahma, Vishnu, and Shiva can be seen.
Tambdi Surla Mahadev mandir Goa Mughal invasion Portuguese colony Hindu temple Lord Shiva Kadamba