We hope this message finds you and your family well and safe during these challenging times. The objective of this letter is to inform you about the critical review of the FACTSHEET: RASHTRIYA SWAYAMSEVAK SANGH (RSS) by the Bridge Initiative Team. The factsheet is not only full of mischaracterization but also symbolizes academic dishonesty. We do not doubt that this factsheet will be instrumental in stoking Hinduphobia on your campus. Further, such an academically sloppy article will bring disrepute to your institution. Following are the challenges with the factsheet.

[1] The factsheet claims that RSS is a paramilitary organization. There is no basis for this claim. This claim is factually incorrect. Instead, the word Swaymsevak means a volunteer. A recent example of RSS volunteerism is their humanitarian service during the Coronavirus pandemic in India.

[2] Paragraph 2 comments - The reference to Historian Tapan Roy Chaudhari is made documenting Doctor Hedgewar's opinion about Muslims. We have accessed the article "Shadows of the Swastika: Historical Perspectives on the Politics of Hindu Communalism" by Tapan Roy Chaudhari. He, in turn, refers to S. Aiyachuri, 'Golwalkar and the Hindu Rashtra', Frontline news magazine, March 12, 1993. So, academic observation about Dr. Hedgewar's quotations is based on secondary references considering an opinion of a journalist. This indicates a nonrigorous literature review. The quotes by Dr.Hedgewar are factually incorrect. 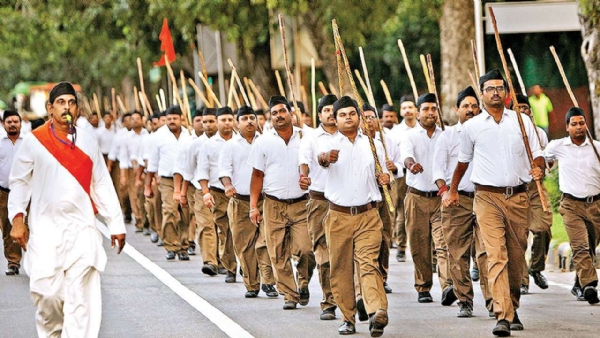 [3 A] Mr.M.S. Golwalkar stated that RSS is not a reactionary organization. Mr.Ms.Golwalkar noted that "We have very positively said NO to sectarian consolidation" We find no attempt by the authors in highlighting accurate thoughts by RSS leaders.

[3. B] The authors from Georgetown give reference to Dr. Moonje's statement. Dr. Mooonje was not the RSS founder. So to conclude about RSS based on Dr. Moonjes's statements is far-fetched and results in incorrect conclusions.

[4] Mr.MS Golwalkar's opinions about the Jewish home state are mentioned. Again the authors have not attempted to study MS Golwakar's thoughts on the Jews rigorously. The factsheet once again takes a quote out of context. The book they refer to was written and published in 1938-39, long before the Jewish holocaust. Let us refer to Koenrad Elst in this regard to put it in the right perspective. Koenrad Elst states, "When Golwalkar wrote that Germany was proving (in a way which he explicitly considered "shocking") the impossibility of culturally distinct nations to live together, he was not referring to the Shoah, which was still three years in the future, but to the removal of Jews from office, their loss of citizenship and their resulting exodus from Germany, phenomena paralleled by the treatment of non-Muslims in Muslim countries even today. And even these pre-War Nazi policies vis-a-vis the Jews were by no means recommended or approved by Golwalkar. At no point did he say that "pogroms are the answer" or that in India, on the German model, "expulsion of minority professors from the universities is the way to avert Partition."

Golwalkar neither applauded the Germans were staging a struggle against Jews nor the German perception of why the Jews were unwelcome to stay, much less the specific methods adopted by the Nazis vis-a-vis the "Jewish question" in any phase of their term in power. All he did was point out that the co-existence of two nations within the German state had led to conflict and that this was an intrinsic liability of any such co-existence, proving the need to make nations homogeneous by assimilating the minorities into the national mainstream."

[5] The factsheet goes on paddling blatant lies. The factsheet states, "On January 30, 1948, Nathuram Godse, a former member of the Sangh, assassinated Gandhi. In the aftermath, Golwalkar was jailed, and the RSS banned."

[5a] Nathuram Godsey left the RSS well before Gandhi's murder because he was not happy with the societal reformation work by RSS.

[5b] Not a single member of RSS was tried by the Indian court in the Gandhi murder case. Then the Home Minister of India, Sardar Vallbhai Patel, further gave a clean chit to the RSS.

[5c] On September 24, 1948, Golwalkar wrote to Patel — also Nehru — demanding that the allegations and the ban be withdrawn because countrywide searches and investigation had yielded no proof against the RSS. On November 3, 1948, challenged the government to disclose the evidence and prosecute the RSS.

[5d] The RSS began a satyagraha on December 9, 1948, demanding to prove the charges, lift the ban and release MS Golwalkar. In one month, some 80,000 RSS workers were arrested. The government failed to provide any evidence against the RSS.

[5e] T.R. Venkatrama Shastri, former Advocate General of Madras and head of the Servants of India Society, met Sardar Patel and urged him to lift the ban.

[5f] The ban was subsequently lifted on July 11, 1949. In a written statement to the Bombay Legislative Assembly on September 14, 1949, the Home Minister Morarji Desai admitted that the ban on RSS was no longer considered necessary; it was lifted unconditionally.

[6] The fact sheet further blatantly paddles the myth "Narendra Modi is a lifelong member of the RSS, and is accused of "allowing" the 2002 massacre of Muslims in his state."

On February 8, 2012, the Supreme Court-appointed special investigation team (SIT) filed a closure report. This report gave a clean chit to then Chief Minister Narendra Modi and 63 others. It was stated that there was "no prosecutable evidence" against them. The factsheet ignores the closure report.

[7] Factsheet suggests In recent years, the RSS has been at the forefront of promoting Hindu-nationalism in India, with the Sangh accused of inciting violence against India's Dalit-Bahujan community, including hate crimes against Muslims, lynchings of Dalits, and pogroms against religious minorities.

This is blatantly a fabrication. RSS has several initiatives named "Samarasta," which translate to "Harmony and Inclusion," to assimilate all sections of the Society, including Dalits.

[7a] Thoughts of senior RSS functionary Dattopant Thengadi are pertinent in this regard. Mr. Dattopant Thengadi stated, "Equality is not possible without Samarasta'. Efforts to bring equality are genuine when there is a feeling of samarasta i.e. feeling of oneness and fraternity behind it."

[7b] The current RSS head, Mr. Mohan Bhagwat's thoughts regarding equity and justice for Dalits are pertinent. Mr.Mohan Bhagwat stated

There are several projects which RSS does to ensure equity and justice for Dalits. The list of projects can be furnished to Georgetown University.

If the Bridge Initiative has some academic honesty, we request them to consider the above facts observations.