Tungnath Temple – the highest of the Paanch Kedar temples

When one thinks about auspicious temples in India, the Paanch Kedar temples are a few of the prominent ones that come to mind. The Tungnath temple has the most unique features and ancient, interesting legends attached to it; and will leave you wanting to visit it right away. Situated amongst the astounding mountains of the Tungnath in the district of Rudraprayag, the Tungnath is the highest Shiva temple in the world nestled at an altitude of 3680 meters!

It is one of the Panch Kedars, and is believed to have belonged to an ancient era which is almost 1000 years old. The temple is dedicated to Lord Shiva and goddess Parvati and was discovered by Shankaracharya. 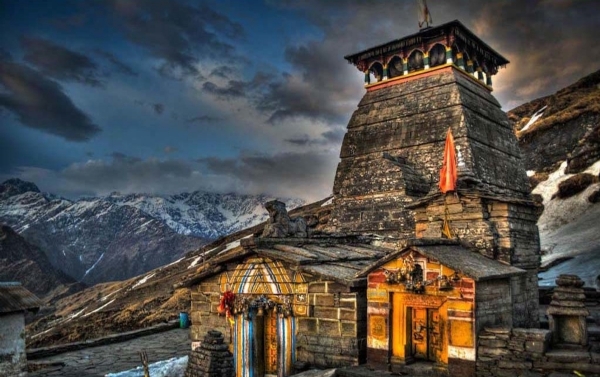 About the temple - Arjuna, the third Pandava brother, was believed to have laid the foundation of this temple. The temple built in the North Indian style of architecture, and has about a dozen shrines of other Gods surrounding the temple. There are several tales associated with this pristine temple, including one where Lord Ram carried out the meditation to get himself released from the curse of Brahmahatya for killing Ravana!
The feature of this exquisite temple which sets it apart from the rest, is its location. It is set amidst stunning mountain ranges, having immense religious importance attracting millions of Hindu pilgrims from around the world in the last many years. The temple is a blend of spirituality, beauty, and serenity. Tungnath is situated at the top of the edge between the waters of the Mandakini River and from those of the Alaknanda River.
Inside the temple - The magnificent temple is made up of stones adorned with decorations that are painted on the outside, showing tall towers. There is also a wooden stage at the top of the highest dome which also has 16 openings. The roof of the temple is composed of stone slabs and at the entrance lays a stone image of Nandi facing towards the idol of Lord Shiva. There is an image of Lord Ganesha on the right side of the temple entrance.
Inside the main chamber lies the ashtadhatu which is composed of 8 metals, idols of saint Vyas and Kala Bhairav and followers of Lord Shiva. There are images of the Pandavas and 4 other Kedar shrines present inside the premises too. At the end of the trek path of Tungnath, the entrance of the temple is marked with the presence of the name 'Tungnath' painted atop an arch which has recently been constructed. 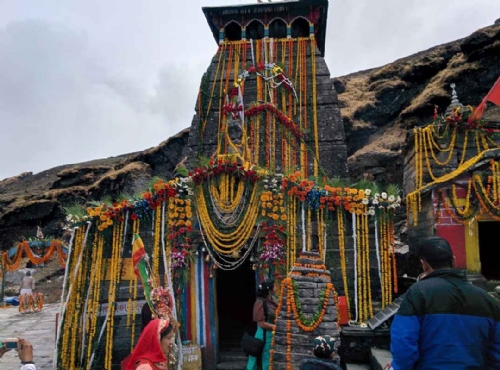 Legend of the temple - According to the legend associated with the Tungnath temple, it is believed that Pandavas started on their journey to find Lord Shiva after killing their cousins in the Kurukshetra war. But since Lord Shiva was angry over all the deaths and killings, he wished to avoid them. As a result of this, he turned into a bull, and disappeared in the ground. All of his body parts scattered in different parts of the area.
Hi hump reached Kedarnath, the bahu at Tungnath, his head at Rudranath, his stomach and navels at Madhyamaheshwar and the jata at Kalpeshwar. A temple was built by the Pandavas at this place to worship Lord Shiva and to please him. The name of the temple has been derived as 'Tung' meaning arms and 'Nath' symbolizing Lord Shiva.
Also Read | Kailash Temple – world’s largest monolithic structure!
Trek to the temple - The Panch Kedar Yatra involves trekking through all the 5 temples which includes Kedarnath, Tungnath, Rudranath, Madhyamaheshwar, and Kalpeshwar, and is considered to be very auspicious. The Tungnath has the shortest trek amongst the 5 Kedars. The trekking route begins from Chopta. The distance between Chopta and the temple is only 5 kms, which can be covered easily within a few hours. Usually, pilgrims cover the Panch Kedars during their Yatras starting from Rishikesh.
Panch Kedar Tungnath Shiv temple Himalayas Kedarnath Lord Shiva Mahabharat trek Panch Kedar Yatra