Meenakshi Temple – the majestic temple in Madurai dedicated to Parvati

The temple is located in the heart of Madurai, spreading over 14 acres

Imagine yourself approaching a temple where you are welcomed by a mounting gateway, well over 15 floors tall, covered in 1500 bright carvings of divine figures. It is certainly a lot to take in at once, but it is just a glimpse of what awaits you inside the Meenakshi Temple. Meenakshi Amman Temple, also called as Minakshi-Sundareshwara Temple, is one of the oldest and most important temples in India. Situated in the city of Madurai, the temple has immense mythological, historical significance. Since Meenakshi is the main deity of the temple, the temple signifies the importance of woman in a Tamil Hindu family. 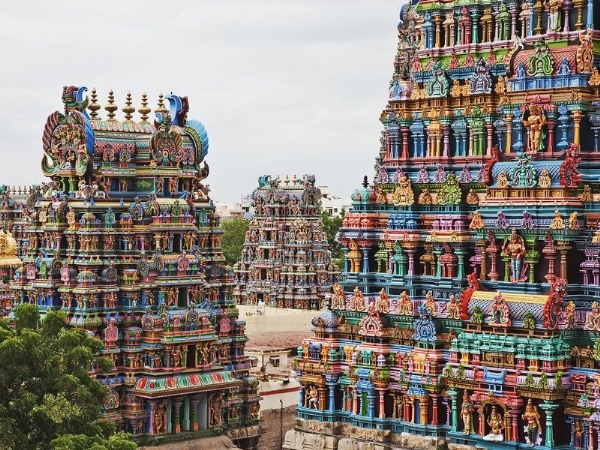 It is believed that Lord Shiva took the form of Sundareswarar, and married Parvati (Meenakshi) at the temple site. Famous for its majestic architecture, Meenakshi Temple was nominated as one of the wonders of the world, but couldn’t make it in the list of ‘Seven Wonders of the World’. However, the it definitely is one of the ‘Wonders of India’. It is also one of the main attractions of South India with 20,000 devotees visiting each day. During the Tirukalyanam Festival, the temple welcomes over a million devotees.
The temple is located in the heart of Madurai, spreading over 14 acres. The temple has huge walls, which were built due to invasions. The entire structure, when looked from above, represents a mandala. Apart from the two main shrines, dedicated to Sundareswarar and Meenakshi, the temple has shrines dedicated to Ganesha and Murugan (Kartikeya) too. The temple is an ideal example of Dravidian architecture - a style of Hindu architecture seen in southern India.
History - Meenakshi Temple dates back to the 1st century C.E with scholars claiming it to be as old as the city itself. It is said that Kulashekarar Pandyan, a king who ruled the Pandyan dynasty, built the temple as per the instructions given in his dream by Lord Shiva. But the temple as it stands today, was rebuilt throughout the 16th century as it was destroyed by the Muslim invaders.

In the 14th century C.E, Malik Kafur, a commander of Delhi Sultanate, led his army into most parts of southern India and looted many temples including the Meenakshi Temple. Gold, silver, precious gems were taken to Delhi. Since temples in those days had abundance of valuables, most of the temples were destroyed. When Vijayanagar Empire took over Madurai after defeating the Muslim Sultanate, the temple was rebuilt and reopened.
Also Read | Tungnath Temple – the highest of the Paanch Kedar temples
The temple was further expanded in 17th century by Vishwanatha Nayakar, king of the Nayaka dynasty. The temple was then expanded by many later Nayaka rulers before arrival of the British East India Company. It was destroyed again during the British Rule. In 1959, the Tamil Hindus restored the temple. The temple was completely restored in 1995
Inside the temple - There is also a holy pond ‘Porthamarai Kulam’ in the premises. This term is a literal translation of ‘pond with a golden lotus.’ The golden lotus is placed at the centre of the pond. It is said that Lord Shiva blessed this pond, declaring that no marine life would grow in it. In the Tamil folklore, the pond is believed to be an evaluator for reviewing the worth of any new literature.

The temple has 4 main gopurams, identical to each other, and look truly majestic. The temple also houses many other gopurams, serving as gateways to a number of shrines. The temple has a total of 14 gopurams. Each one of them is a multi-storey structure and displays thousands of mythological stories and several other sculptures. The tallest gopuram stands around 170 feet, containing more than 1500 brightly painted figures that are repaired and repainted every 12 years.