The comrade sees red in any hue of saffron. The biggest mistake of our comrades is their refusal to see the spiritual underpinning and cultural unity of this great country.

Comrades these days are very angry. Their fight against the bourgeoisie hasn’t reached anywhere in 100 years. The subaltern Hindu that had been kept quiet using Nehruvian heft and abuse has risen and doesn’t give a damn to their fulmination and name-calling. Any action, any law, any scheme that sees their proletariat rise in their lives makes them see red. It is like a bull seeing a red rag.
Every word of RSS and BJP is seen through a microscope and underlined with red strokes to check how far they have moved from the ‘Nehruvian consensus’ – an evocative term to show the hold of Left elite using Nehru and his daughter as their allies to rewrite history and hijack the future. 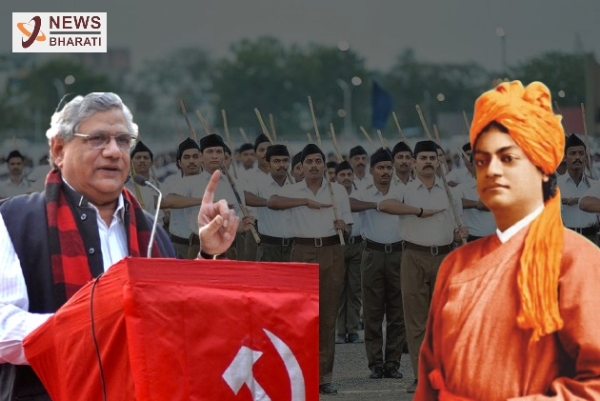 Today, Twitter was kind enough to show me a tweet by Comrade Yechury who is fighting a battle within Marxist camp. Obviously, the following sheet of “Samachar” by the PIB has riled the comrade no end.
Followed by his diatribe -
1. By claiming “freedom struggle was not limited to only British rule” they betray their focus always remained communal anti Muslim & never anti British.
2. Must constantly remember that leaders of 1857, Jhansi ki Rani included, proclaimed the Mughal Monarch Bahadur Shah Zafar as the Sovereign of Independent India overthrowing the British.
3. Indian people will defeat this RSS/BJP agenda to keep India in chains.
4. The concealed agenda of this Amrit Mahotsav is Modi’s efforts to smuggle in RSS/Hindutva elements as ‘heroes’ of freedom struggle when they were actually collaborating with the British.
5. Legacy of our freedom struggle is moving forward towards more equality, justice and fraternity. Azadi ✊🏾 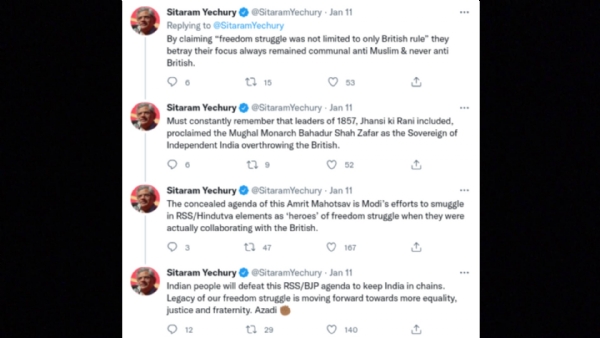