Vittala Temple – the most special of the Hampi monuments

It is no secret that Hampi is one of the best cities in India, if not the world, to go explore abundance of history and architecture etched in every part of the place. Today we will explore what is probably the best Hampi has to offer, on the architectural front. Vittala temple in Hampi is an ancient monument known for its excellent architecture and unmatched craftsmanship. 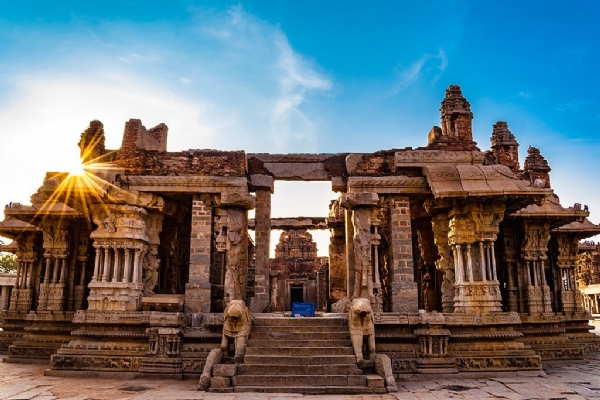 It is considered to be one of the largest and the most famous structure in Hampi. The temple is located in the north eastern part of Hampi, near banks of the Tungabhadra River. It is a must visit for tourists.
The temple is dedicated to Lord Vitthala. According to legend, the temple was built as an abode for Lord Vishnu in his Vitthala form. But the Lord had found the temple too grand for his use, and returned to live in his own humble home.
The Temple dates back to the 15th century. It was built during the reign of King Devaraya II (1422 – 1446 A.D.), a ruler of the Vijayanagara Empire. Parts of the temple were expanded and enhanced during the reign of Krishnadevaraya (1509 – 1529 A.D.), the most famous ruler of the Vijayanagara dynasty. He played a significant role in giving the monument its present look.
Architecture – This temple is presumed to be the grandest of all temples and monuments in Hampi. The temple showcases the immense creativity and architectural knowledge that the sculptors and artisans of the Vijayanagara era had. The temple was built in the Dravidian style of architecture. It’s elaborate, artistic carvings and magnificent architecture is unmatched by any other structure found in Hampi.
Also Read | Vijay Stambha: The pride of Chittor built by Rana Kumbh celebrating the victory against Mahmud Khalji
Some of the main attractions of the Temple:
Maha Mantapa: This is the main hall of the Vittala Temple and is situated in the inner courtyard of the temple. It is a structure of immense beauty and is situated on an ornate base.

The central part of the Maha Mantapa has 16 intricately decorated pillars having beautiful sculptures of Narasimha and Yali. These set of sixteen pillars forms a rectangular court.

Stone Chariot: The Vittala Temple Complex has the richly sculpted Stone Chariot, which is considered to be the most stunning architecture of the Vijayanagara kingdom. The Stone Chariot or Ratha stands in the courtyard of temple. It is one of the three famous stone chariots in India. The other two chariots are situated in Konark (Odissa) and Mahabalipuram (Tamil Nadu).

The Stone Chariot of Vittala Temple is actually a shrine that has been designed in the shape of an ornamental chariot. The shrine is dedicated to Garuda and had an image of Garuda enshrined into the sanctum. As per Hindu mythology, Garuda is the carrier of Lord Vishnu.
The Musical Pillars of the Ranga Mantapa: The Ranga Mantapa is one of the main attractions of the temple. The large mantapa is known for its 56 musical pillars. These musical pillars are also known as SAREGAMA pillars – depicting the musical notes they emit. The musical notes and emanated when the pillars are tapped gently.

There are a set of main pillars and several sets of minor pillars inside the Mantapa. Each main pillar provides support to the ceiling of the Ranga Mantapa. The main pillars are designed as musical instruments. 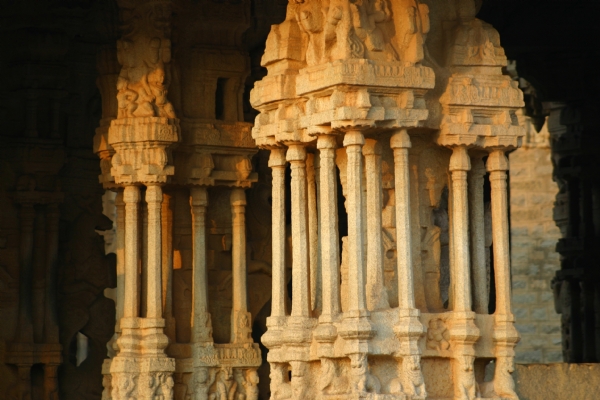 These pillars were carved out of huge pieces of resonant stone. The emission of musical notes from stone pillars was a mystery that fascinated many through the centuries.
Even British rulers were in awe, wanting to know the secret behind these musical pillars. To feed their curiosity, they cut 2 of these pillars to check if anything existed inside the stone pillars emitting musical notes. They found nothing inside the pillars. The two cut pillars cut still exist inside the temple, and can be seen to this day.

Also Read | Galta Ji temple: the historical glory of Rajasthan
Today, the temple is in partial ruins. The sanctum sanctorum of the temple once contained an idol of Lord Vittala. But now the sanctum is devoid of it. The central western hall of the temple was ruined during attack of the Mughals, leading to the downfall of Vijayanagara Empire in 1565 A.D.
The wheels of the chariot were once functional and could be rotated by people. Tapping the musical pillars to emit musical notes is prohibited, as tapping caused damage to the musical pillars over the years.