Sheth Hutheesing Kesarisinh formerly began the construction of the Hutheesing Jain temple with Rs. 8 lakh, in 1848.

There is a certain feature Indian temples have, which is capable of alluring one and all. The temple we will explore today is more than just a place of worship for devotees, but is also a complete visual treat along with being an absolute architectural marvel. A must visit for all architecture buffs, the Hutheesing Jain Temple was established back in 1848, and is one of the most respected Jain temples in Ahmedabad. 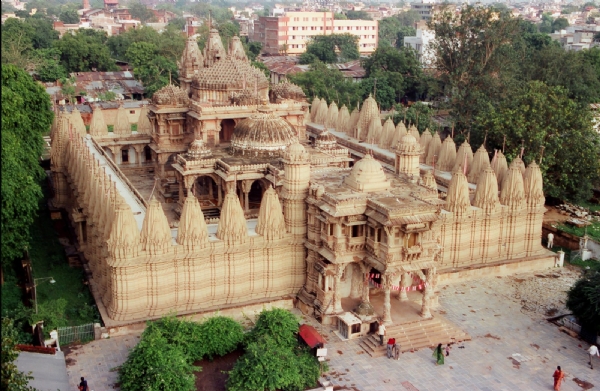 Located on Shahibaug Road of Bardolpura, this temple project, first taken up by Sheth Hutheesing Kesarisinh was later completed by his wife, Shethani Harkunwar. Dedicated to the 15th Tirthankara of Jains, Lord Dharmanath, this 2-storied white marble structure is home to 11 deity sculptures.
Hutheesing Jain Temple Architecture: The Hutheesing Jain Temple, also known as the Hathisingh Jain Temple, hosts an area of a tiled courtyard. The temple, which is a result of 2 whole years of intricate design and outstanding architecture, had the chief architect as Premchand Salat. The temple contains of a dome-shaped structure supported by 12 pillars, which is the roof to the Mandapa / outer hall. This mandapa hosts the sacred Garbagriha, which is connected by 52 other shrines detailed in Tirthanakara carvings each. The whole essence of the temple houses an air of the typical Haveli architecture.
Salat has skilfully combined the modern and the ancient elements to make to paint the picture of a divine unison. The temple is basically a symbol of creativity - where stone has been morphed into wood, and the temple into a haveli. The entrance of this temple resembles the gateway architecture of havelis of that era.

Intricate carved railings, arching balconies, chabutras, jaalis for women for a quick glance, and the detailed carved walls, give it a haveli appearance. The creator’s eye for design as you walk through the entrance pavilion with ascending steps, a gateway and the first floor mass, is fully unmissable. 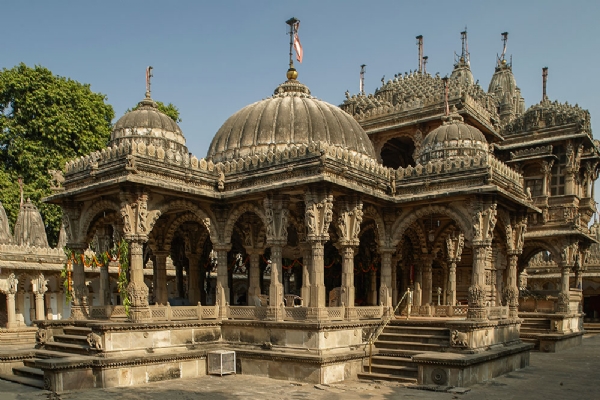 The highlight of the temple is the recently installed 78-metres-long Manasthamba which is also known as Mahavir Stambha which guards the sculpture of Mahaveera at the entrance. It is a highly significant trait among Jain temples. The tower hosts the footsteps and idol of Lord Mahavir, and was built to commemorate the 2-and-a-half millennium of his birth anniversary. The tower stands as a visual reference to the temple. Apart from the intricate design and devotional appeal, the temple is also known for its rain harvesting structure, practised even today.
Sheth Hutheesing Kesarisinh formerly began the construction of the Hutheesing Jain temple with Rs. 8 lakh, in 1848. Shethani Harkunvar, Kesarisinh's second wife continued the establishment of this prominent temple as her husband passed away, aged 49 during the development of the temple. Legend has it that the second wife got this temple started when Sheth had fell seriously ill. She wanted to have a portion of the temple built before Sheth passed away. Hence, she started with the base temple, which has 2 sub-shrines. The other part of the temple along with the sculptures and rock carvings were completed later. Sheth died even before the temple was completed, but it was still named after him. This Jain temple, with Jina Dharmanatha as the principal deity, was released in 2 years.
Also Read | The finest stone monument in Nepal: Krishna Mandir
Completed in 2 years since its foundation, this temple is named after its founder, Sheth Hutheesing Kesarisinh, who was a well-known trader of that time. It is believed that the temple has a 170-year old burning flame under the Garbagriha or the sanctum sanctorum. The Hutheesing Jain temple is currently under the management of the Hutheesing family trust.
A few prominent festivals celebrated at the Hutheesing Jain Temple are Paryushan and Mahaveer Jayanthi. The Mahavir Jayanthi annually celebrated on the 29th of March and is a public holiday. Marking the birth of Mahavira - Kalyuga's last Tirthankara, this celebration is also known as the Mahavira Janma Kalyanak. Paryushan is a purification festival organised for 8-10 days, when devotees perform meditation, fasting and prayers.
Hutheesing Jain temple Ahmedabad architecture Sheth Hutheesing Kesarisinh