The vault in the temple contained wealth worth more than a 1000 billion dollars!

The place we’re about to look into today could easily be one of the most unique and mysterious temples in India, housing secrets costing literal billions! The Padmanabhaswamy temple is located in Thiruvananthapuram, the capital city of Kerala. Embellished in gold-plated covering, the temple is opened only to Hindu followers. Dedicated to Lord Padmanabha; one of the avatars of Lord Vishnu, the Padmanabhaswamy Temple is one of the principal centres of Vaishnava worship in the dharma of Vaishnavism. 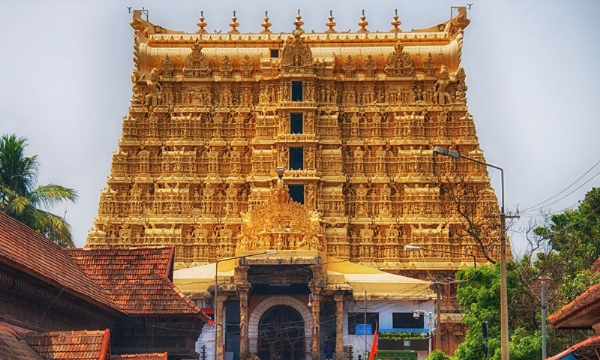 Even if the origin of this temple still remains a mystery, it is believed that it has existed since the first day of Kali Yuga - which was 5000 years ago. The Padmanabhaswamy temple also has a mention in the Bhagwad Gita. The scripture says that Balarama, the older brother of Lord Krishna frequented the temple, making several offerings the deity here.
There exist several vaults in the temple complex. There are A, B, C, D, E and F vaults, all of which except Vault B are opened at least 8 times, annually. Famous historians & archaeologists believe that the mysterious contents of this vault are extremely sacred and may be risky to unveil.
The chamber is believed to have been sealed by the Siddha Purushas or the Ever-Ready Male Devotees of the 16th century using the Naga Bandham (Snake Guard). The door of Vault B which is guarded by snakes can be opened only through a sage who knows well about the Naga Bandham. The Muni would have to chant the Garuda Mantram to open the door, which would easily open then. Any attempt to open the door using machinery / technology is believed to have the potential to destroy the entire country. 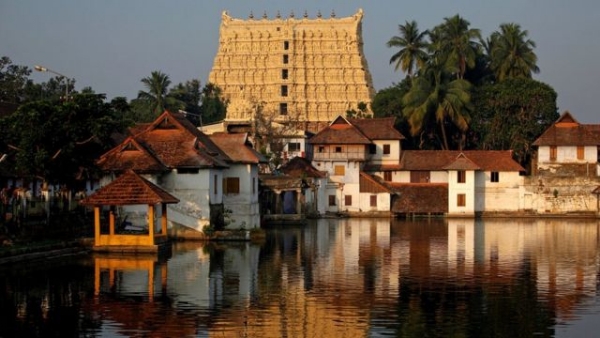 Treasure: In 2011, Supreme Court of India sent a 7-member team (in presence of the Head Trustee of the Travancore Trust of Sri Anantha Padmanabha Swamy) to open the 6 vaults that were locked in the temple. All were wonderstruck when the chambers were opened.

The chambers contained bags of diamonds, piles of gems, 100s of gold statues, several gold idols, tons of gold utensils, gold coins from different nations and expensive ancient weaponry. The priceless items found weighed over 1 ton of pure gold and diamonds and were worth more than 1000 billion dollars!

Several gold statues that were found were over 9 feet in height being studded with gems. Huge solitaire diamonds lay in the vault. Gold and diamond necklaces were about 18 feet long, and heaps of solid gold coconut shells were discovered weighing over 66 pounds. 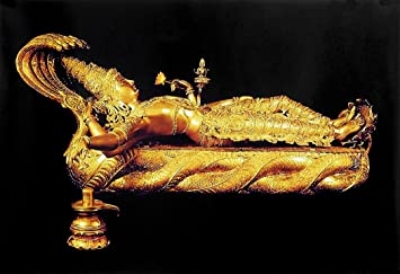 History: The story behind the Padmanabhaswamy Temple begins with the sage, Divakar Muni, a believer in Lord Vishnu and also deeply meditated in his name. One day the Muni saw child, he felt paternal towards it, he never wished to let the child out of sight, and thus pleaded the kid to never leave him alone. The child agreed on one condition, that he must always be treated with love, respect. If he failed, the child said that he would disappear and never return. The Muni agreed and took care of the child and fondly beared his tantrums.
Once when Muni was meditating, the child started mishandling his salagram, an instrument used by the Muni to worship Lord Vishnu. Enraged by this, the sage shouted at the kid. Subsequently, the child ran away from the Muni. But before leaving, the child told the sage, "If you wish to see me again, you will find me again in Ananthankaadu" - a present temple located behind the present Padmanabhaswamy temple.

The Muni realised that the child wasn’t ordinary, and was set on a mission to find him again. He started along the route the child had taken. He spotted the child, disappearing into a tree. When he neared it, this tree fell and took the form of Shree Maha Vishnu. Terrified by the sudden manifestation, the Muni requested Lord Vishnu to retract to his original self so that he could worship him. Vishnu agreed; shrunk 3 times the length of the Sanyasi's Yoga Dand.
Also Read | Hutheesing Jain temple: the ultimate architectural marvel of Ahmedabad
The sage immediately offered the Lord a raw mango in a coconut shell. This is a continued daily tradition in the temple even now. Lord Vishnu instructed that any devotion in the form of prayers to him must be performed by Tulu Brahmins. This is the reason why half the priests here represent Tulu region.
Architecture: The architecture of the place is a combination of the Kerala style and the Dravidian style of architecture. The main characteristic of this type of architectural design are the high walls. The temple also houses a sanctum sanctorum on a stone slab. The main deity of the temple is an 18-feet-long idol.
The temple is made of stone and bronze, with beautiful murals and paintings detailing its walls. A corridor extends from eastern side and is said to have 365 & 1-quarter of granite stone pillars, carved with intricate designs. Another attraction is the Navagraha Mandapa, which is a ceiling displaying the 9 planets.
Padmanabhaswamy temple South India Tulu region Divakar Muni Lord Vishnu Thiruvananthapuram