A look at how tableaux are selected

Every year, in the celebration of Republic Day, tableaux are represented that showcases the story or a scene from history.

India gears up to celebrate its 73rd Republic Day on January 26. Republic Day is celebrated with full fervor and enthusiasm across the nation as the Indian constitution came into effect on January 26, 1950. On this day, a grand parade is organized at the Rajpath in New Delhi that showcases the defence capabilities, diversity, and rich cultural heritage.


Every year, in the celebration of Republic Day, tableaux are represented that showcases the story or a scene from history. In this parade, only a select number of tableaux from states and ministries of the central government participate in the Republic Day parade. In a letter to the chief secretaries of all states and Union Territories in September last year, the Ministry of Defence had said the selection process of tableaux is an elaborate and time-consuming exercise, and that in view of time constraints, the ministry will be able to include only a limited number of proposals. 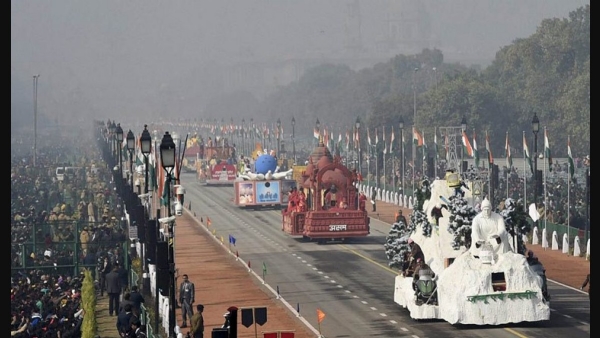 As per this letter, the theme for the Republic Day parade of 2022 would be ‘India@75’ to commemorate 75 years of India’s independence.


Tableaux are a group of motionless figures or models that showcases the story or scene from history. In the celebration of Republic Day, the states, departments, and ministries represent their achievements in the form of history or culture that are represented by their respective tableaux.


How are the tableaux selected?


The Ministry of Defence takes care of the selection process of tableaux. The selection process goes through a number of guidelines. According to the guidelines, the tableaux should represent some historical event, culture, heritage, development programmes, and environment. It is also mentioned that the tableaux must not carry any logos and should carry some animation and sound.
How do the tableaux proposals take place?
The selection process of tableaux is very lengthy. In this, the Ministry of Defence sets up an expert committee with people from various fields of arts so that the proposals get shortlisted accordingly. The expert committee consists of people from different fields of art, culture, painting, sculpture, music, architecture, choreography, etc. After this, they analyze the various proposals received from all ministries and departments, as well as states and the committee evaluates them in a series of meetings.
After this, the sketch or the design of the proposals are scrutinized and they are given the suggestion to make changes in it. After that, if the design gets approved, the participants are asked to come up with the 3D models of their proposals. After this process, the 3D models are examined for the final round and this is how the tableaux are selected. To be noted, the guidelines also state that not more than one tableaux from an organization are selected for the parade.
This year, the Karnataka tableau will showcase the state’s traditional handicrafts that took 45 days and 140 workers to prepare, and were brought to Delhi in three truckloads and assembled here. The Uttar Pradesh float will showcase the Kashi Vishwanath Dham, and that of Goa will portray the area’s historical and natural attractions. Maharashtra’s biodiversity will be represented in the state’s tableau, and Punjab’s contribution to the Independence struggle will be on display. Chhattisgarh and Jammu & Kashmir are also part of the parade.