Have you ever seen such a wonder before, which will match the breath-taking place we’ll explore today? A single glance at this temple will show that this is not an ordinary one - with its Gopuram having more than 1 lakh carvings on it! You surely must have never set your eyes upon a building so exquisite. South India is filled with unique architectural wonders, and the Suchindram Temple is an excellent example of it. The temple is located in Suchindram, Kanyakumari. A unique aspect of it is that it is dedicated to Trinity of God - Lord Shiva, Lord Vishnu and Lord Brahma; hence having high religious importance. 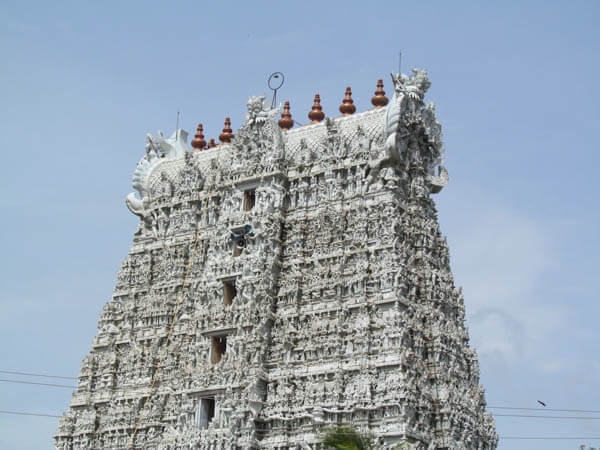 The alluring architecture of this pristine temple – This temple is known not just for its religious significance but also for its alluring architecture. This temple has a white Gopuram of 7 stories with its portico decked with sculpted images of several deities. This 134 ft high Gopuram appears all the more astonishing as it gets adorned with sunrays. This presents a glorious example of the architecture styles of South Indian temples. One of the most astonishing features the temple presents is that Gopuram has more than 1 lakh carvings on it!
Major attractions of this temple are the 4 musical pillars with a height of 18 feet. These pillars have been carved out of a single granite stone. The temple has a dancing hall as well with around 1035 beautifully carved pillars. Sthanu (Lord Shiva), Mal (Lord Vishnu) and Aya (Lord Brahma) are present in the sanctum sanctorum. By the side of sanctorum, there is a shrine for Lord Vishnu; the idol of the Lord has been made by combining eight different kinds of metals. On to the right side, there is shrine of Lord Rama and Goddess Sita, while on the left side is the shrine of Lord Ganesha. There are around 30 shrines in this temple.
There is also a massive idol of Lord Hanuman at a height of 22 ft! The statue has been carved out of single granite rock. This state of Lord Hanuman, which is one of the largest statues in India, was kept hidden in the temple as attacks from Tipu Sultan were feared. Later in 1930, it was found and was then restored to its previous glory. 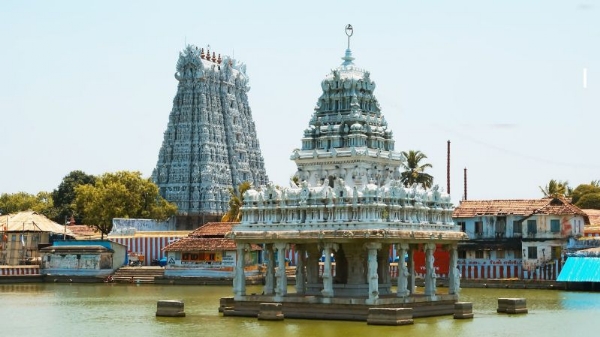 History - The temple is said to be built in 17th Century. However, a few parts of the temple can be traced back to 8th to the 15th century. The inscriptions of the temple dates back to 9th Century. Before merger of Kanyakumari in Tamil Nadu, it came under administration of Travancore Kingdom. The main temple of Travancore kingdom was at Padmanabhapuram. This temple is Vaishnavite. In Nagercoil, which was previously under control of Cholas, Chera and Pandya reign, most residents were Shaivites. Hence, this temple shows a wonderful site where all 3 - Lord Shiva, Lord Vishnu and Lord Brahma is worshipped.
Also Read | Yulla Kanda - Home to the highest Shri Krishna temple in the world!
Legend behind this ancient temple – There are several legends attached to this temple. One of the interesting ones goes like this - As per the legend, Lord Shiva has stayed in Suchindram when he had come to marry Devi Kanyakumari. He started from here for his wedding that was scheduled to be at an auspicious time in the night. When he reached Vazhukkamparai, (around 5 km away from Suchindram), Sage Narad disguised as a rooster and falsely crowed, indicating the onset of morning. Believing that the auspicious moment for the wedding has passed, Lord Shiva has returned to Suchindram without marrying the Devi.
Suchindram Temple Trinity of God Kanyakumari Lord Shiva Lord Brahma