There are shafts, holes, narrow lanes in the temple which are so impressive that its hard to believe they were created by humans using no technology

It may not have been officially declared as one of the official wonders of the world, but one cannot deny how extremely unique the Kailash Temple in Ellora actually is. It will leave you truly perplexed, wondering how the temple could have been carved out of a single rock, using the most basic of tools! Situated almost 30 km from Aurangabad in Maharashtra, the rock-cave temple of Ellora is the largest monolithic structure in the world. This is temple is so unique that it is impossible to be constructed again, and can’t be destroyed. 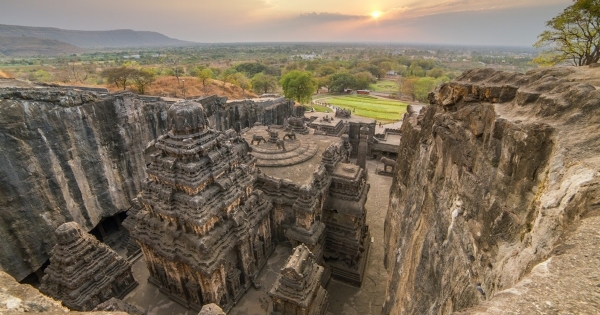 Kailasa Temple (756-773 CE) – The Kailasa temple is a true architectural wonder carved out from one single piece of rock! Rashtrakuta King, Krishna I created this temple. The temple is one of the 34 cave temples known collectively as the Ellora Caves.
The archaeologists have confirmed that over 400,000 tons (36,28,73,896 kgs) of rocks had to be scooped out to make this amazing structure. This would have taken centuries of human labour as per the expert’s calculation. But, this temple was built in just 18 years, which is hard to fathom. If this is true, it would mean that 5 tons of rock were removed daily, which some experts argue is nearly impossible even with the most advanced technology at our disposal today.
Furthermore, the Kailasa is just one of the many temples found at Ellora. This ancient site has over 100 caves, all of which were excavated in ancient times, without modern technology, from the basalt cliffs of Charanandri Hills. Only 34 of the 100 caves are open to public.
The temple stands 60 feet tall and 200 feet wide. It is amazing how 400,000 tons of heavy rock was scooped out by using only basic equipment like hammer and cutters! Even with modern day equipment, one cannot build this temple in less than 400 years. Even the Taj Mahal took 21 years to get completed, but this temple was completed in only 18 years. Also, the Taj Mahal can be recreated using modern-day tools, but the Kailasha temple cannot.

What about the time taken in planning, designing, carving it? How did they manage to carve out this temple using just hammers, chisels and picks? This temple was made by cutting the solid mountain from the top. Hence, a single mistake, however small, by any worker, could have ruined the entire effort put into the carving!

The entrance to the temple courtyard features a low gopuram. Most of the deities at the left of the entrance are affiliated with Shiva. The deities on the right side are affiliated with Lord Vishnu. The temple is dedicated to Shiva and has ornate carvings depicting different deities.
A huge Bodhi tree is carved out at the back. The hall has a vaulted roof in which ribs have been carved in the rock imitating the wooden ones. The Jain caves contain some of the earliest Samavasarana images amongst its devotional carvings. The Samavasarana is of particular importance to Jains being the hall where the Tirthankara preaches after attaining Kevala Jnana or liberating omniscience.
Another unexplainable feature about the temple is holes that were dug in the temple here, which could not have been done by any normal sized human being. The holes are so tiny that one look at them will show that only someone extremely small in size could have carved it. Such narrow holes can only be drilled if hi-tech modern machinery was used.
Also Read | Suchindram Temple – the South Indian temple dedicated to the Trinity of God
There are several shafts, holes, narrow lanes here which are so impressive that it is hard to believe that they were created by humans using no modern-day technology. This temple proves that Indians pioneered many important scientific, medical, architectural and mathematical achievements that are still used today. Albert Einstein once quipped, “We owe a lot to the Indians, who taught us how to count, without which no worthwhile scientific discovery could have been made.”
Kailash Temple Ellora caves Ajanta Ellora Aurangabad Maharashtra temples