Scores of Indians, especially Hindus, called the Victoria police to inform them of these billboards glorifying terrorism.

Melbourne, April 29: As a massive shock to the Indians in Melbourne, Khalistan Day billboards were put up displaying pictures of terrorist 'Jarnail Singh Bhindranwale' in the city. As Indians in Australia were outraged, the ‘Khalistan Day’ posters featuring Bhindranwale were removed, earlier this week. 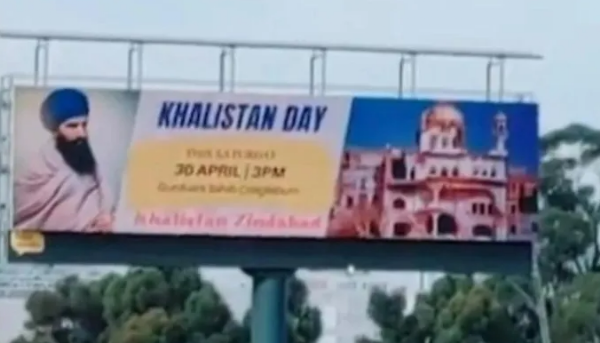 According to reports, many Indians, especially Hindus, called the Victoria police to inform them of these billboards glorifying terrorism. Indians in Australia wrote a mail to the billboard company asking to remove the poster.
Mails were written to the CEO of the billboard company, requesting for the removal of the billboard. The mails made them aware of the Khalistan movement, and how it is a terrorism-fuelled movement seeking to create a separate country for its supporters which is to be supposedly named Khalistan. People requested to stop this digital advertisement immediately and to ensure that such advertisements are not displayed in the future.

The company received hundreds of emails from all across Australia requesting the management of the company to remove the billboard as it deeply hurts the entire India-Australian community.
Also Read | UK PM Johnson's India visit: Extradition issue and Khalistani threats on the table
One of the prominent Twitter handles ‘Stop Hindu Hate Advocacy Group’ tweeted, “Bhindranwale billboard was seen in Melbourne, Aus. Amar Singh of Turban 4 Australia, a Khalistani group, was awarded Citizen of the Year, Federal MP Alex Hawke tweeted in support of Khalistanis. GOI should make this an issue before any FTA’s are signed.”
As a result of the outrage, this poster and the picture of terrorist Bhindranwale on the billboard were removed.
Khalistan Day Melbourne Australia Hindu