The 1857 War a glorious chapter in modern Indian history

Every year May 10 is observed as the anniversary of the First War of Indian Independence. This war was fought collectively by all Indians as one nation-one people rising above the social, religious, and economic barriers. Unfortunately due to certain mistakes and strategic blunders we lost the war but nevertheless it ignited the flame of independence in the hearts and minds of the common masses who continued the struggle for another nine decades to regain the freedom of Mother India in 1947.

Which Bharatiya who would not feel proud of listening to the events of the great war of independence of 1857? It was a wonderful, amazing, and unique event in world history that shook the whole world in general and the British Indian Empire in particular. It was a collective and countrywide challenge of the People of Bharat against the imperialist British Government. Millions of people were killed in it. The British not only committed genocide but also carried out terrible plunder. This struggle lasted more than a year in a row.

The misinformation was spread that the struggle was confined to North India only and it was merely soldier mutiny. In fact, the whole of India had fought this first War of Independence collectively. The whole country fought this war soldiers, feudal, peasants, laborers, Dalits, women, and intellectuals all fought for justice.

"The reality is that there was a revolt against the British rule by the people of the entire region of the north and North West of India.’ – Justine McCarthy “History of our own Times”:

The 1857 War of Independence was not merely the whims of the kings and some soldiers in power. That attempt may have failed, but it was fruitful for the future. In spite of all the brutality, the British could not suppress the desire of the Bharatiya people to achieve independence. It was the beginning of the throwing the yoke of the British from the shoulders not only continued but has also affected the Bharat of the future at large.

There are three important sides of the 1857 revolution.

1. There was Satyagraha and Armed Revolution for independence by various individuals and institutions

2. Some people migrated abroad and created an atmosphere in favor of freedom and assisted the efforts being made in Hindustan for independence.

3. Satyagraha and movements across the country endeavored in Pan India manner.

Sardar Panikkar writes in ‘A Survey of Indian History’ - "Everyone had the same and the similar objective - to get national independence by driving the British out of the country. From this point of view, you cannot call it a rebellion. It was a great national uplift. ”

Tatya Tope, one of the generals of the War, said in front of the judge at Shivpuri Cantonment: "I am well aware that due to the struggle with the British, one has to go towards the mouth of death. I don't need any court, nor do I have to participate in the case. ”

Christianization of Hindustan: The East India Company had an emphasis on the Christianization of Hindustan. There was a strong movement that grew in England to spread Christianity in India and convert its Hindu and Muslim subjects to that faith. By the Charter Act of 1813, Christian missionaries were permitted to enter the Company's territories in India to propagate and spread their religion and promote Western education. The Christian missionaries took every opportunity to denounce idolatry, ridiculed the Hindu gods and goddesses, and criticized the philosophy and principles of Hinduism and Islam. The teaching of Christian doctrines was made compulsory in educational institutes run by the missionaries. Thus, the interference of the British authorities in social customs and practices through social legislation and the encouragement given by the government to Christian missionaries in their proselytizing activities created a sense of apprehension and hatred in the minds of Indians. (Patrick Brantlinger, Rule of Darkness, pg 202) In military cantonments, Ram, Krishna, the Vedas, the Prophet, and the Qur'an were abused by Christian missionaries, and they were punished when the Indian soldier resisted the discontent with the bulk conversion of the soldiers began to swell inside. With government assistance conversion activities of the Christian missionaries began to increase.| 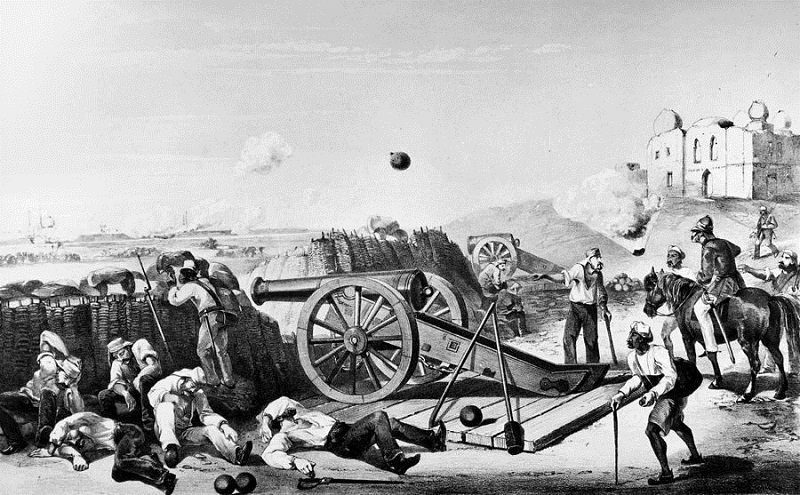 Vinayak Damodar Savarkar on 1857: Veer Savarkar's ' Indian War of Independence 1857 is the world's first history book that has the distinction of being banned even before publication. The book was written in 1909 using the library of the India Office in London. For almost a year and a half, he took a dip in documents relating to 1857 and the great sea of British writings. Later, this book gained fame as the 'Gita of revolutionaries'. It was translated into many languages. During that period, it was sold for three hundred rupees each. The book was also published by Madame Cama, Lala Hardayal, Subhash Chandra Bose, and Bhagat Singh. The book was compulsorily read in the camps of the Azad Hind Fauj.

In 1908, Savarkar wrote in the French newspaper 'Talvar' - "The purpose of my book is not only to present the historical truth as a matter of fact but also to ignite the fire of revolution in the hearts of the people for the freedom of the motherland and to wage a second revolution war."

India: After 1857: Five major changes were made by the British government to divide India administratively, economically, and culturally and strengthen their imperialist power

• The name of the regime of the autocratic East India Company was changed.

• The Governor-General was made the Queen's Viceroy (Royal Representative).

• The government was under both the Indian Secretary in London and the Viceroy in Calcutta.

• John Lawrence, who was the Viceroy during 1864-69, reformed the Indian Army. Now the Queen and the soldiers of the East India Company were merged.

• In 1876, Benjamin Disraeli, Prime Minister of the United Kingdom announced the policy in which the Queen was named Queen of India.

The Policy of Divide and Instigating Communal Riots: A British official wrote in the Asiatic Journal in 1821, "Divide Et Impera must be the principle of our political, civil and military Indian administration." John Coke was posted as commandant in Moradabad. He wrote after the War of 1857, "Efforts must be made with all might to continue the division between different communities. We don't have to mix them together. Divide Et Impera should be the rule of our Indian government." The Governor of Bombay, Stuart Elphinstone, wrote on May 14, 1859, we should adopt the old Roman doctrine of Divide Et Impera. (Lajpat Rai, Unhappy India, Banna: Calcutta, 1928, pp. 403-04)

Muslim Hatred against Hindus: Muslim politics in India in the 18th century was heavily influenced by a British writer W.S. Blunt. In 1883, he came to India and met several Muslim leaders. He visited almost every part of India. During this time, many Muslims complained against Hindus with Blunt. At dinner, he met a Muslim Nawab and his sons. The Nawab told Blunt that at the time of Gadar he remained in his city because he did not want to leave. But he was in constant touch with the British authorities. That's why he was not hanged, while the properties of others were confiscated." The Nawab told Blunt that most of the rebels (1857) were Hindus, so he did not like them. (Wilfrid Scawen Blunt, Indian Under Ripon, T Fisher: London, 1909, pp. 164-65)

Muslim’s Demand for reservations: During his visit to Calcutta, a counselor, Maulvi Ahmed, came to meet him. The Muslim cleric said, "It is not possible for Muslims that anything can be done together with Hindus." (Wilfrid Scawen Blunt, Indian Under Ripon, T. Fisher: London, 1909, p. 110) This thinking for the first time demanded separate representation for Muslims in India. In one of his speeches at the Legislative Council, Mohammad Yusuf demanded reservations for Muslims. (Biman Bihari Majumdar, History of Political Thought, vol. I, University of Calcutta, 1934, p. 399) It was now clear that Muslims had separated themselves from Hindus in political matters.

Some Muslim leaders told Blunt that in the Egypt War (1881-12), we expected Pasha to change our fate. (Wilfrid Scawen Blunt, Indian Under Ripon, T Fisher: London, 1909, p. 112). This is significant because, in place of Hindus, Indian Muslims started establishing their affiliations outside India. This thinking damaged Indian nationalism.

The movement in Bharat was started by Jamal Afghani, who hailed from Afghanistan and came to Bharat around 1881. He secretly met Bharatiya Muslim leaders in Calcutta, and in Calcutta, he met Nawab Abdul Latif and a small group of educated Muslims who accompanied him. It also included Amir Ali. Nationalist leader Bipin Chandra Pal mentions it in his autobiography and writes, "All of them were vaccinated against the pan-Islamic virus. After this, he started to make a distance from the political activities of the Hindus, and gradually in our national efforts, a deep chasm began to arise between the Hindus and the enlightened Muslims." (Bipin Chandra Pal, Memories of My Life and Times, Modern Book: Calcutta, 1932, p. 417)

The British government was aware of this pan-Islamic movement of Muslims. The Secretary of State, Hamilton, wrote a letter to Viceroy Elgin on July 30, 1897, "Through the Pan-Islamic Council we have found a new ingredient in instigating conspiracy and incitement to incite conspiracy and provocations in India." (R.C. Majumdar, History of the Freedom Movement in India, volume 1, Frima K.L. Calcutta,1962, p. 475)

These riots later created a feeling of insecurity among the Hindus and made the Muslims more vocal about their demand for Pakistan which they could fulfill in 1947 when the country achieved freedom at midnight. (With inputs from agencies)